Robin Williams, the Oscar-winning actor and stand-up comedian who's lived for many years in the San Francisco Bay Area, was found dead in his Tiburon, California home on Monday, as the Marin Sheriff's Department is reporting.

The Sheriff's Department issued a release Monday, August 11, saying that they are currently investigating Williams' death, but that the county coroner "suspects the death to be a suicide due to asphyxia." Williams was reportedly last seen by his wife around 10 p.m. on Sunday, and could not be found in the home this morning. He was then found and reported unconscious and not breathing at 11:55 a.m.

The Marin Independent Journal notes that Williams, a recovering alcoholic and cocaine addict, had recently gone back for treatment in a rehab facility. As of July 1, he was checked into the Hazelden Addiction Treatment Center near Lindstrom, Minnesota, and it was at a nearby Dairy Queen that an employee posted the photo below to Facebook. It may be one of the last known photos of the actor. It's not clear how long Williams had been back home in Tiburon.

Williams' death comes six months after the drug-related passing of actor Philip Seymour Hoffman, who had also fallen off the wagon in his struggle with heroin addiction. People on social media have been quick to post the video clip below, from 1998's Patch Adams, of a scene with Hoffman and Williams.

For more background on how Williams got his start, watch this PBS video, dedicated to the pioneers of television.

Many obituaries likely to follow. Also below, a routine Williams did in 2008 about the end of George W. Bush's "reign of error."

Williams, it was announced in April, was set to star in Mrs. Doubtfire 2, due out in 2015. He also recently reprised his role as Teddy Roosevelt in the Night at the Museum franchise, with the third installment due out this Christmas.

Update: The entire New York Times obit is up, which includes Williams' publicist Mara Buxbaum confirming that the actor had been "battling severe depression." [NYT]

Read how Bay Area locals, including Ben Fong-Torres and Mayor Ed Lee, have responded to the news. The national response includes this touching statement from President Barack Obama, in which he calls Williams "one of a kind."

Williams' wife Susan Schneider issued a statement as well, saying: "This morning, I lost my husband and my best friend, while the world lost one of its most beloved artists and beautiful human beings. I am utterly heartbroken. On behalf of Robin's family, we are asking for privacy during our time of profound grief. As he is remembered, it is our hope the focus will not be on Robin's death, but on the countless moments of joy and laughter he gave to millions." [Hollywood Reporter]

If someone you know exhibits warning signs of suicide: do not leave the person alone; remove any firearms, alcohol, drugs or sharp objects that could be used in a suicide attempt; and call the U.S. National Suicide Prevention Lifeline at 800-273-TALK (8255) or take the person to an emergency room or seek help from a medical or mental health professional. 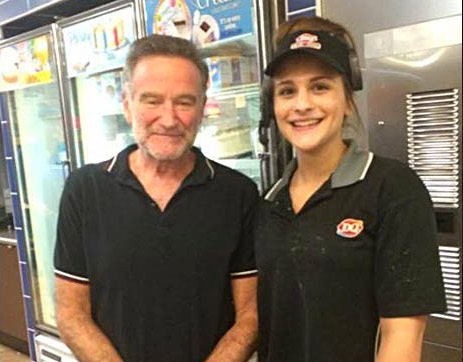 We're still reeling from the news that Robin Williams was found dead today. Here's some less tragic news in the Bay Area. A new San Francisco ordinance, which starts this week, blocks larger

The Sheriff's Department is hoping the public can help identify this man who was found critically injured and unconscious near the intersection of Church and Duboce Streets around 7:30 a.m. on

—
Robin Williams Dead At Age 63, Possibly By Suicide
Share this