Repeated airline stowaway Marilyn Hartman  who finally succeeded in skipping town this week at San Jose Airport, after at least seven failed attempts to board planes at SFO  was released from jail on Wednesday in L.A. and happily spoke with reporters about her TSA trickery. "It was clearly wrong on my part and I certainly don't want to do it again... because I certainly don't want to do any jail time," she told ABC 7. By the way, I might want to adopt her.

She looks clearly thrilled to be on camera (see courtroom photo below) and talk about her situation  which, actually, seems fairly sad, because she's been homeless for the last five months and likely has been in the past, and has no family to speak of. Upon each of her arrests in San Mateo County, she left the emergency contact field blank on her booking forms, as the Mercury News reports. 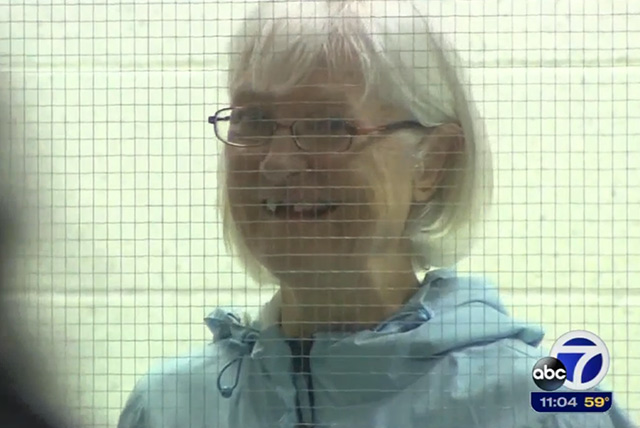 Also, at least on the surface, she is contrite about her serial habit of breaching security and stowing away on planes. "I am an American first and foremost and I believe very strongly in the security of this country, so in that regard it was very stupid," she said.

However, this stowaway thing is something she's been doing for years, as she admits in a blog post dated July 2012. "I have slipped through tight security spots in orer [sic] to fly to another city without a plane ticket, and inexplicably let go after authorities discussed the matter among themselves." She appears to have lived in Chicago, San Diego, Seattle, and Maui over the last few years. Subsequent blog posts detail her sad and tedious back-and-forths with the Social Security Administration over lost benefit checks, having her purse stolen while she was trying to use a public library computer, and getting kicked out of a cockroach-infested SRO in San Diego.

Hartman's claim back in the spring, upon her first or second arrest of this year, that she had cancer and was looking to travel someplace warm, is not exactly true. Authorities determined that she's indeed a cancer survivor, but has been in remission for seven years.

I still say we need to band together and FUND HER TRIP TO HAWAII. She's had a rough year! She may have some slight mental illness, however she is indeed very articulate, as SF District Attorney Steve Wagstaffe has previously said.

She's just lonely, and she is nothing if not persistent, probably because she's broke and restless and Maui sounds pretty nice right now. As for how she'll get back to the Bay Area from L.A., assuming she wants to, she doesn't know. She told reporters she currently has $4.25 to her name, and she's been homeless since leaving a Tenderloin SRO back in February. San Francisco International Airport, she has said, is a place she feels "safe" when she has nowhere else to go. She's now been banned from SFO and LAX, however, if she enters without a valid boarding pass. (Wagstaffe also says that they kept her two July arrests out of the media for fear that she was encouraged by all the press, but he now thinks that the media attention is irrelevant, and she may just keep doing this anyway.)

In related news, the TSA at San Jose Airport would like everyone to know that Hartman's sneakiness does not officially count as a security breach because she was indeed screened for weapons and banned materials. She just sneaked past the document-check area, and they are making some "minor modifications to the layout of the document checking area to prevent another incident like this one." Oh good.

Update 8/7: Well, so much for her contrition. Hartman went straight back to LAX today and was arrested. Again.

A few of you fine commenters chimed in about my Yelp post yesterday, saying I was unfair to criticize CEO Jeremy Stoppelman's comments on San Francisco's housing problem and the lack of diversity

Back in December, 2013, when BART ended their ban on bikes on their trains during rush hour, they told cycle-toting riders that there were still some rules that they need to follow. Now,

—
Serial Stowaway Marilyn Hartman Has A Blog, Seems Thrilled With The Attention [Updated]
Share this