Just in case you needed a little schadenfreude to kick off your Tuesday: A tipster sent in these photos of a tech bus that became stuck at 21st and Chattanooga this morning  as others unwittingly have in the past in the very same neighborhood  with its ass end still in the Muni Metro tracks blocking J trains in both directions.

Of course the recent deal that took effect this week allowing such corporate shuttles to politely share designated Muni bus stops throughout the city does not take into account those occasions when the shuttle drivers don't know that they shouldn't navigate certain hills in those double-height rigs, especially when weighted down with dozens of over-achieving (and some under-achieving) employees and their laptops. Because here would be an occasion when the shuttle network is kind of obstructing Muni operations in a significant way, at rush hour.

You may feel bad for the driver who is trying to figure out how to fix this. You may also feel bad for the Muni commuters waiting there at 21st Street hoping they might be able to get downtown soon.

We don't yet know whether this situation required a tow like this one.

Noe Valley hills are bad bad bad for these buses. 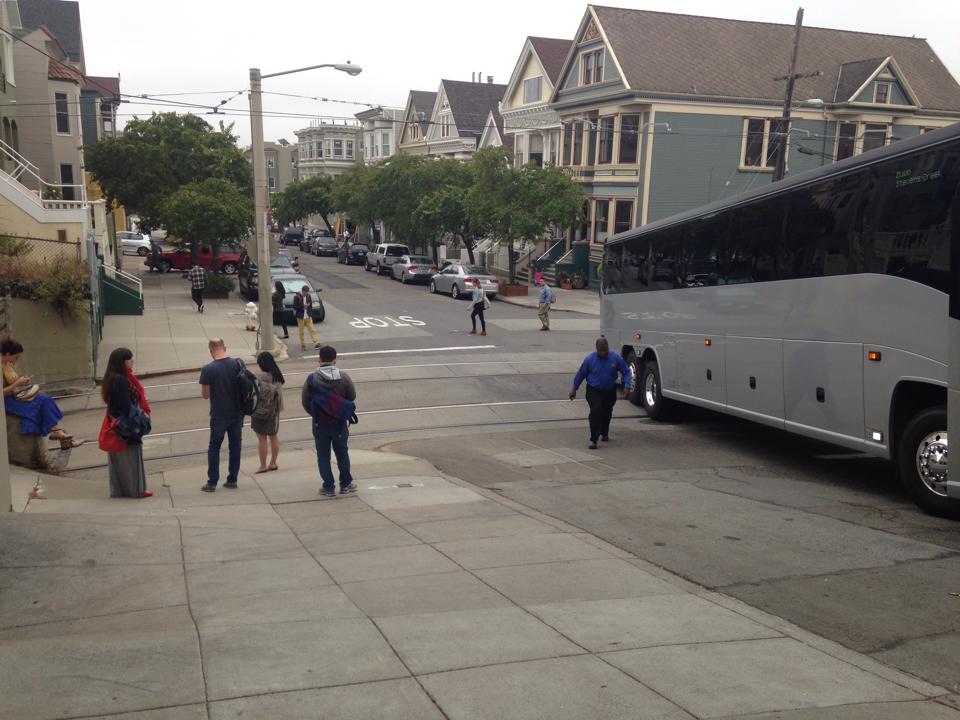 Turns out that the social network designed to help you get a better job is a pretty lousy employer. LinkedIn is coughing up nearly $6 million in back wages and damages after the

The Coast Guard is testing "virtual buoys" in the SF Bay. [Coast Guard News] Where were all the Asians in SF-set Dawn of the Planet of the Apes? [8Asians] An SF artist finds

—
Tech Bus Bottoms Out, Blocks J Train In Both Directions at 21st Street
Share this