There has been a notable increase in the last year or so  probably among your friends in rent-controlled apartments, but also among people seeking counseling from the Tenants' Union  of buyout offers by landlords who are seeing green in this tight rental market.

The Tenants' Union reports a 95% uptick in the number of clients they've had seeking legal counseling related to buyout offers, from 90 in 2007 to 175 last year, and this year's number is likely to be even higher. And this doesn't mean there were only 175 cases of landlords offering buyouts  it means that's just the number of cases where tenants perhaps weren't offered much or who didn't have their own lawyers to consult. The number of people receiving and/or accepting buyout offers is impossible to know without a large-scale poll (we're conducting our own informal one below), but could at a historic high right now.

So, if you or one of your friends gets such an offer, you should do what one of my friends recently did when his building was bought by new owners who wanted him out: Ask for at least $50,000. A landlord looking to flip a rent-controlled apartment to a new, market-rate tenant stands to make that money back within a couple years, if not less than one year, depending on how cheap your current rent is. (In the case of that friend, the new landlords looked relieved by that figure.) And do you know how much you could end up paying to stay in S.F. unless you get fairly lucky? You may want to think about investing that buyout money  less the 28 percent or so you'll pay in taxes, since it will be taxed like income  or using it for a downpayment on something in San Mateo/Oakland/Sonoma.

And, you may be able to get away with asking for much more than that. As Socketsite reports, the Tenants' Union recorded a five-year highest-achieved buyout of $80,000 among its clients, and I can confirm that another friend was bought out of an apartment near Hayes Valley for that much in the last six months. How long had that friend been in his apartment? A long time.

Of course no one says you have to move. The trouble with repeatedly refusing a buyout offer, though, is that in some cases it creates bad blood, meaning a landlord might start to get litigious and start looking for any tiny infraction that could be a lease violation, in preparation for an actual eviction. It's a lengthy, painful, and expensive process, but depending on how eager they are to get you out, it could happen.

Supervisor David Campos is doing everything he can to discourage landlords from offering buyouts at all, proposing legislation that would re-classify tenant buyouts under city law as no-fault evictions  a distinction that would disallow owners from condo converting, and from re-renting to a new tenant at market rate. Those landlord advocates will probably sue over that too.

Buyout offers tend to occur in the city's hottest neighborhoods for obvious reasons, and the map below shows the highest concentrations in the last five years, via Tenants' Union data, in the Mission, Castro, Hayes Valley, and NoPa vicinities.

Know your rights! And know what your apartment is worth to them.

Also, take the poll below, and pass it around. 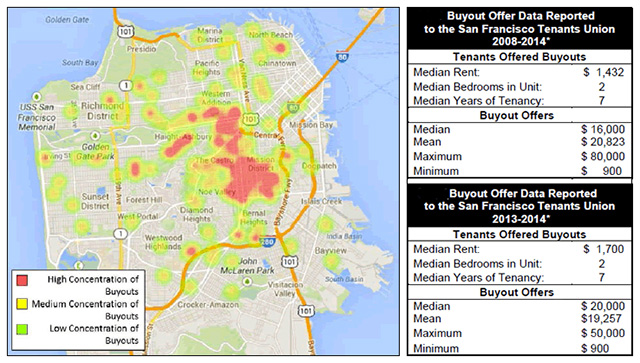 Via the Tenants' Union

photo credit: Oakland Local What you're doing this weekend: Hoodslam, Friday, August 1, 9 p.m. Have you guys been to Hoodslam? Heard of it? Well, whatever your answer, it's exactly what you

We warned you not to hug and kiss the two new wolverines at the San Francisco Zoo, but after watching this ridiculously adorable video, you'll be tempted. These feisty, ferocious hunters look like

—
How Much Should You Get Paid If Your Landlord Wants To Buy You Out Of Your Rent-Controlled Apartment?
Share this