It’s rarely ice cream weather in San Francisco, but is there ever really a bad time to indulge in a scoop (or sundae or pint, depending on the devastation of your most recent break-up)? There’s a lot of variety in the Bay Area these days, from the serious and small-batched at Bi-Rite Creamery to the cheeky, limited edition flavors at Three Twins like Two Tops Don't Make a Bottom and Bear Bait (its Gay Pride special of vanilla with muffin top chunks). And soon, Berkeley’s famed customizable ice-cream sandwich shop, CREAM (Cookies Rule Everything Around Me), will be open in the Mission, as Eater SF reports, giving you even more options. Here are SFist's favorite spots to scream for ice cream.


Three Twins
Among our local ice creameries, Three Twins stands out for a number of tasty original flavors (Lemon Cookie and Dad's Cardamom are two of my faves) as well as their cheeky, limited edition flavors  there was Sergio Romo's Mexcan Chocolate, with the tagline "It only tastes illegal," and who can forget their Gay Pride-themed flavors like Two Tops Don't Make a Bottom and Bear Bait. They recently recovered and reopened after a 2011 fire at their Fillmore Street shop, but their ice cream never left the shelves of local grocery stores and remains some of the best in town. And, even though they might have stolen the idea for their strawberry-balsamic flavor from Bi-Rite, they named theirs Strawberry Je Ne Sais Quoi, so I can forgive them. Jay Barmann
254 Fillmore Street at Haight, and available at Safeway, Whole Foods, etc.

Humphry Slocombe
Much like Three Twins, Humphry Slocombe is beloved in San Francisco almost as much for their clever marketing and flavor-naming as for their ice cream. Co-owner and head ice cream-maker Jake Godby has made a habit of keeping up a hilarious Twitter presence for his ice cream shop from the start, and the flavor array has included brilliant stabs at Michael Jackson (Jesus Juice, which is Coke and red wine, don't you know), Elvis (the Elvis [the fat years] sundae is made with banana ice cream and bacon peanut brittle), and just flat-out funny names like Secret Breakfast (bourbon and cornflakes) and After School Special (vanilla ice cream with chocolate-covered potato chips and caramel, a flavor that Jimmy Fallon might have ripped off when he got his own Ben & Jerry's flavor). But, as their ongoing success  cookbook and second location and all  suggests, the ice cream itself is damn good, right down to their simplest signature flavors, like Blue Bottle Vietnamese Coffee. Jay Barmann
2790A Harrison Street at 24th, and 1 Ferry Building

Bi-Rite Creamery
There’s a line out the door for a reason. Yes, it’s overrun with tourists who consider themselves foodies, but ignore them and brave the wait because Bi-Rite Creamery is still one of the best scoops in town. Favorites like Salted Caramel — the shop’s most popular flavor — have not lost their luster, but don’t skip the more experimental offerings such as Basil, which is made with basil from Full Belly Farms. Bi-Rite’s ice cream is crafted in small batches using organic milk, cream, and eggs from the nearby Straus Family Creamery, which might account for its irresistible creaminess. —Whitney Phaneuf
3692 18th Street 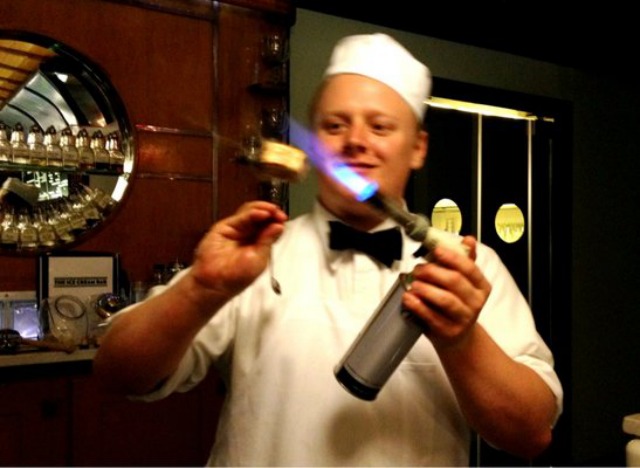 The Ice Cream Bar
This isn’t kid stuff: The Ice Cream Bar Soda Fountain’s offerings include old-school classics like phosphates, lactarts, malts, and (for adults only) alcohol-infused “remedies.” One of the standout dishes on a menu full of treats is the Keller’s Farm, which is cornmeal shortbread, creme fraiche and morello cherry ice creams, cherry sauce, and rosemary syrup. Take a seat at the sweeping counter facing the genuine 1930s-era soda fountain, and watch their jerks work. —Eve Batey
815 Cole Street 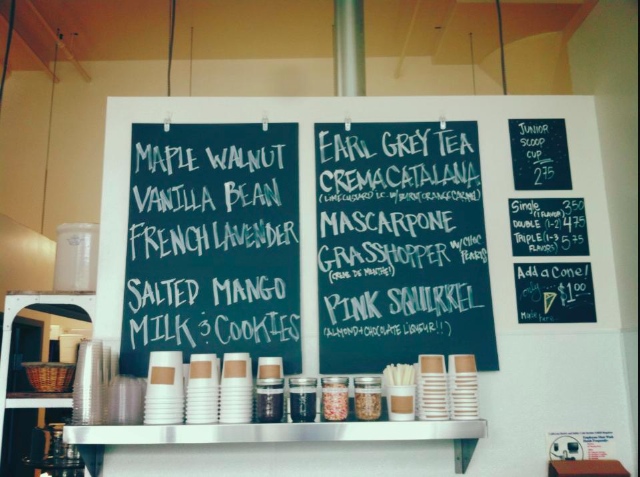 Mr. and Mrs. Miscellaneous
Now here’s an ice cream shop created for kids and adults alike. Former pastry chef Ian Flores puts an innovative spin on ice cream at Mr. and Mrs. Miscellaneous, with flavors such as Olive Oil, Meyer Lemon and Honey, and Bourbon and Caramel. Even the most ambitious creations manage to have the perfect texture. More normal fare like Mint Chip and Peanut Butter are also often on the menu, which changes almost daily. There’s no website to keep track of the ever-changing flavors, but if you find yourself in the Dogpatch, don’t miss this scoop. —Whitney Phaneuf
699 22nd Street 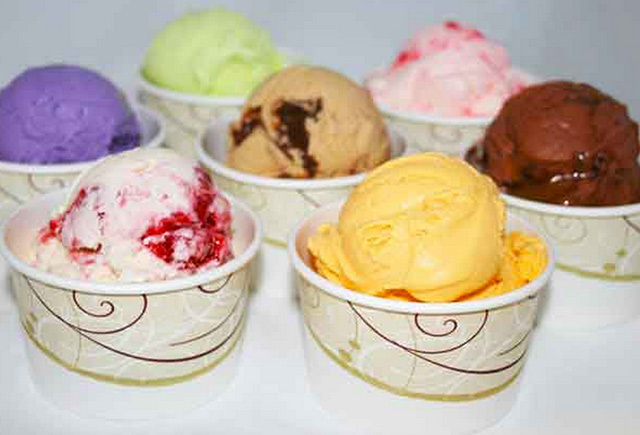 Mitchell's
Mitchell's, along with Swenson's, is San Francisco's most old-school of ice cream shops, dating back over 60 years in the outer Mission. But despite its age, the place has always been ahead of the curve with innovative flavors like horchata, avocado, Mexican chocolate, lychee, Peruvian lucuma, and two flavors made from types of Filipino coconut (buko and macapuno). Just because it's bright purple, don't shy away from the delicious ube (made with purple yams imported from the Philippines), and you'll never go wrong with their rich and delicious chocolate ice cream either. Jay Barmann
688 San Jose Avenue 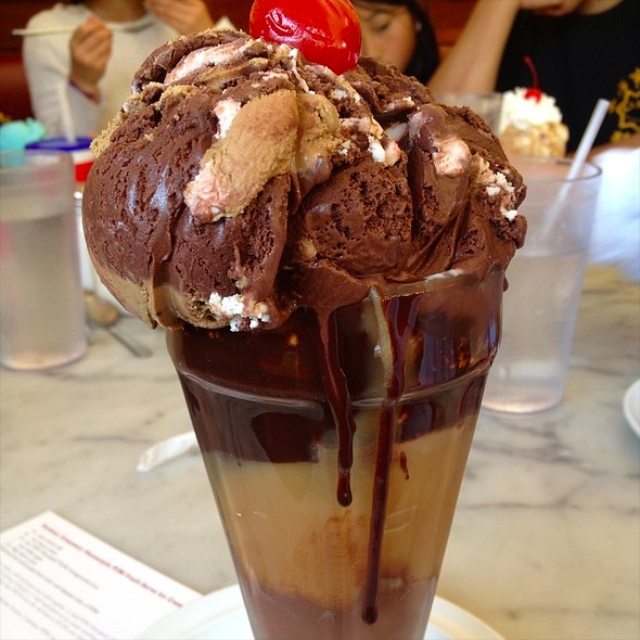 Fentons Creamery
If an old-fashioned ice cream parlor is what you’re after, it doesn’t get more old school than Fentons Creamery which celebrates its 120th anniversary this year. The ice cream shop and restaurant has been at its Piedmont Avenue location since 1961, as Michael Bauer recently wrote in Inside Scoop, and it's still a small, family-owned operation. Its menu covers all the classic flavors, plus features tasty diner food, but the massive Black & Tan Sundae is what Fentons is known for, which combines toasted almond and vanilla ice cream with chocolate and caramel sauces. —Whitney Phaneuf
4226 Piedmont Avenue (Oakland) 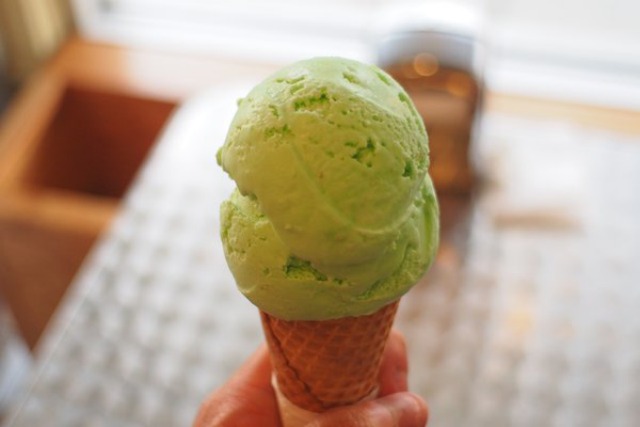 Yelp user Vivian L. gets ready to dig into a cone of Joe's Wasabi ice cream.

Joe's Ice Cream
Richmond District residents worried that it was game over for Joe's when they were bounced from the plum corner Geary Boulevard spot they'd occupied since since 1959. But there was a happy ending for the award-winning homemade ice cream makers when they moved to a new location half-a-block away and actually got more popular. Fave flavors from their list include Irish Coffee (try it in a Coke float), Ginger, Root Beer Swirl, and, for the adventurous, Wasabi. —Eve Batey
5420 Geary Boulevard 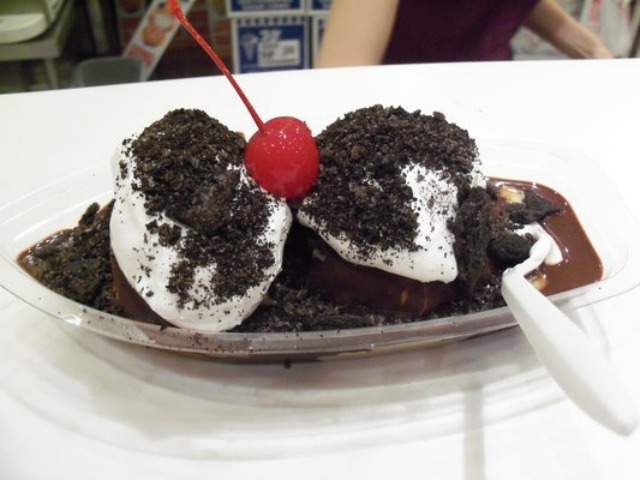 Polly Ann Ice Cream
"Did you spin the wheel?" is the first thing the Polly Ann faithful will ask when you tell them you went to the perennially-packed ice cream joint. Yes, for the daring, or perhaps just the indecisive, there's a wheel you can have a Polly Ann staffer spin to make your choice for you. Polly Ann has a collection of around 500 flavors, about 50 of which are available at any given time. They range from the classics (chocolate, vanilla, etc), to intriguing mixes like "Bumpy Freeway," to Asian flavors like Black Sesame and the notorious Durian. An Outer Sunset standby since it first opened in 1950, Polly Ann's patrons are a mix of area residents, students from nearby Saint Ignatius High School, and visitors braving the fog for a scoop of "Star Wars." Now spin that wheel! —Eve Batey
3138 Noriega Street 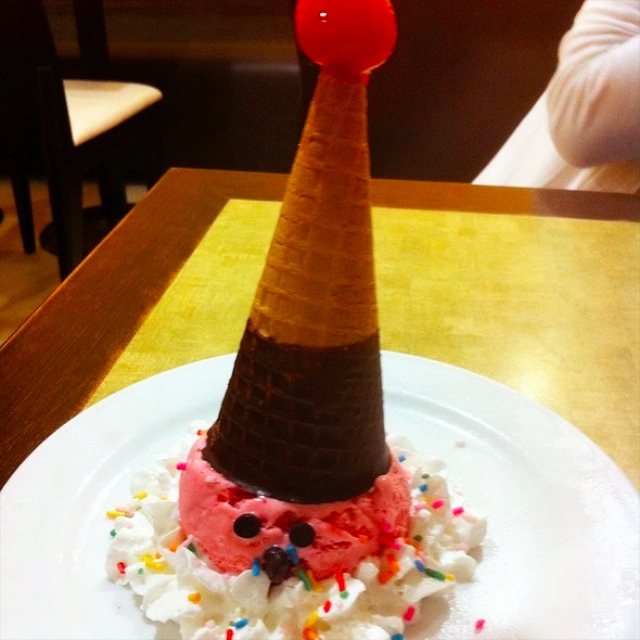 Swensen's
Although you might have grown up with it in your local mall, Swensen's started right here in San Francisco. The Russian Hill original has been serving scoops since 1964 and is still run semi-independently, allowing it to make ice cream onsite according to original recipes. You can’t go wrong with a scoop of Sticky Chewy Chocolate, Turkish Coffee, or Cookies & Cream — or live a little and combine all three into one of their mega sundaes. —Whitney Phaneuf
1999 Hyde Street (Photo by sirgious)

How San Francisco's clean drinking water destroyed the 2nd Yosemite. [Gizmodo] Why SF won’t be getting on Berkeley’s free weed for the needy train. [SF Weekly] The Van Ness BRT might

As discussed earlier, Supervisor Jane Kim and Mayor Ed Lee have proposed dueling ballot measures to deal with the city's housing crisis which are both set to go on the November ballot. Kim's