Not all dogs are created equal, as all you street-food aficionados should be well aware. And though San Francisco's frankfurter array may not be nearly as huge or renowned as what you'll find in New York or Chicago, we definitely hold our own on the artisanal hot dog front, and it's not like we don't have a baseball stadium. Below, our very American roundup of this very American delicacy in this most American of weeks.


SHOW DOGS
The first thing you need to know about this Mid-Market sausage and dog emporium is that it comes with a pedigree. Foreign Cinema chef-owner couple Gayle Pirie and John Clark opened the place across the street from the Golden Gate Theater and a half block up from the Warfield in 2009, and they've been patiently waiting for the area to gentrify ever sense (luckily it's happening very, very soon). This counter-service spot serves killer breakfasts and an array of sausages, all-beef dogs, and corn dogs, with the added bonus of house-made ketchup, mustard, and pickle relish. And they've got a bunch of local beers on tap, which is most important if you're trying to squeeze in a quick dinner before a show.  Jay Barmann
1020 Market Street at 6th/Taylor 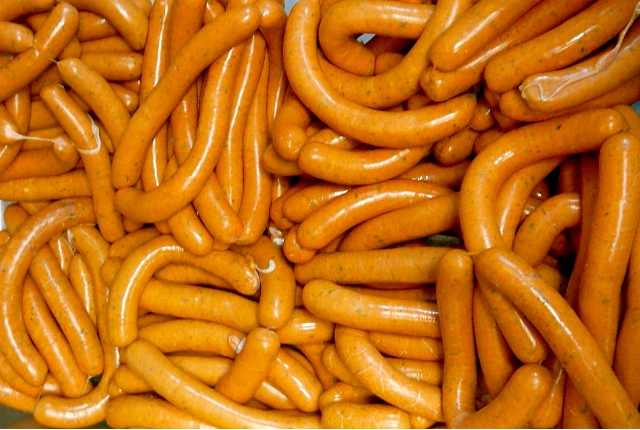 4505 BURGERS & BBQ
Ryan Farr makes hot dogs that recall his Midwestern youth, with a touch of classic New York snappiness. Farr’s recipe calls for hormone and antibiotic free meat seasoned with parsley, garlic, thyme, pink salt, paprika, white pepper and salt. (Check out his step-by-step instructions on how he makes them). At 4505 Burgers & BBQ, the hot dogs are cooked in a smokehouse and studded (under the casing) with bacon. — Whitney Phaneuf
705 Divisadero Street
1909 Mission Street
1 Ferry Building 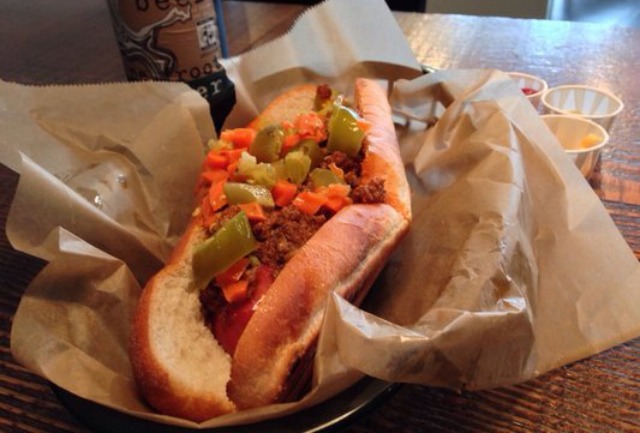 ROSAMUNDE SAUSAGE GRILL
Though Rosamunde is known as more of a sausage place than a hot dog destination, their all-beef Knockwurst has been described as the grown-up answer to a traditional dog. If you're feeling more porky, then their Nuernberger Bratwurst is the way to go. If you want to say "screw it, I'm at Rosamunde and I'm getting sausage," then their Merguez, a combo of spicy lamb and beef, gets high marks from those in the know. Vegans/vegetarians have plenty of sausage options, too (but your sausage might be sharing a cooking surface with meat, so if you're super-strict, this might not be your first choice), and their vegan German baked beans and split pea soup (at their Mission location only) are both good enough to stand on their own.  Eve Batey
545 Haight Street between Steiner Street and Fillmore Street
2832 Mission Street between 24th and 25th Streets 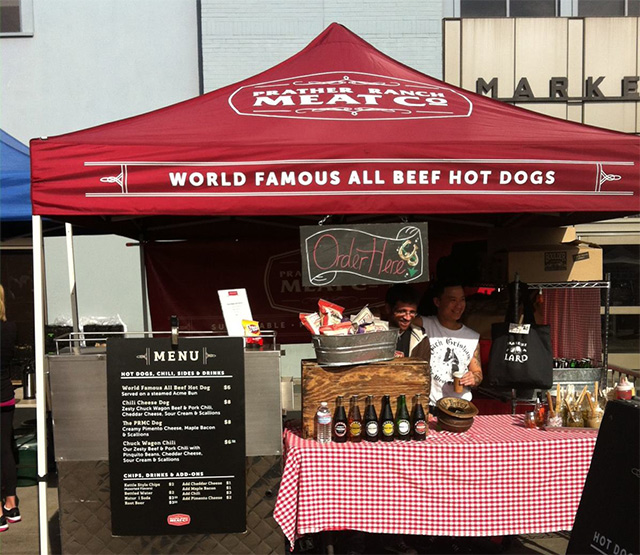 PRATHER RANCH
Another must on this best-of in the local and artisanal category is the all-beef hot dog from locally born meat company Prather Ranch. The dogs are made in small batches with humanely raised, dry-aged beef, organic spices, and never contain nitrites. In addition to retail shops in Hayes Valley and at the Ferry Building, and regular appearances with their uncooked and cured products at various farmers' markets, their hot dog stand makes appearances twice a week outside the Ferry Building from 8 a.m. to 2 p.m. on Saturdays, and from 10 a.m. to 2 p.m. on Thursdays. You can also order up one of their delicious dogs any day at their American Eatery stall inside the Ferry Building, which bills itself as "a different breed of fast food."  Jay Barmann
The Ferry Building, and also available in bulk at various farmers' markets 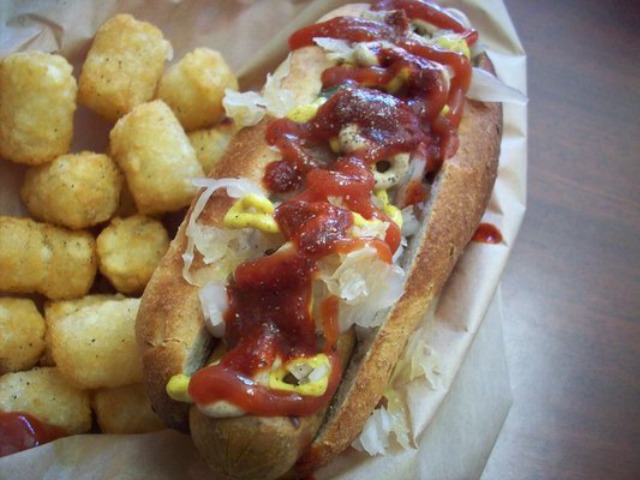 Underdog's Vegan Dog "with hot sauce and other condiments," and the a side of tater tots. Lolia S./Yelp

The Vegan Dog at UNDERDOG
Funky, teeny Underdog sports a fine collection of meat and vegan dogs and sausages, but their vegan dog has an elegant simplicity that makes it a standout. Composed of non-GMO soy and wheat, you have the option of organic wheat or white buns that feel substantial, not like Wonder (there are two gluten-free options as well, but you're eating a hot dog made of wheat so that seems kind of silly in this case). You can go totally bonkers on the toppings, with grilled or raw onions, slaw, kraut, roasted garlic, sweet peppers, cheese (they have regular and vegan), mushrooms, relish, and jalapeños. I usually just go with the kraut and garlic, but with that many toppings you have enough combos to keep yourself going for a while. Or live dangerously and get them all!  Eve Batey
1634 Irving Street (between 17th and 18th Avenues) 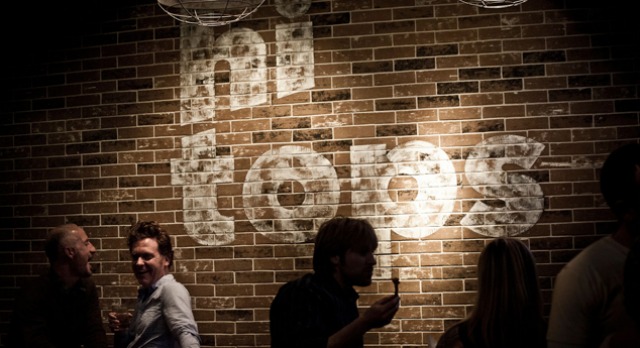 Hi Tops is all about the exposed brick, like all the cool bars on TV! Photo: Hi Tops' website

The Vegetarian Corn Dog at HI TOPS
Those of us who skip meat don't get a lot of chances at a decent corn dog, as they can get pretty, uh, doughy and damp (Morningstar Farms, I'm looking at you). But Castro sports bar Hi Tops has miraculously found a way around this problem with their house-made corn dog. It's a veggie dog that somehow manages to keep its snap beneath a thick, crisp layer of cornmeal batter that's just the right amount of sweet. I hear their non-vegetarian version's pretty great, too. Dunk either in their selection of dipping sauces (the house made mustard gets kudos) and you'll feel like a kid again, especially if as a kid you went to gay bars.  Eve Batey
2247 Market St (between Sanchez Street and 16th Street) 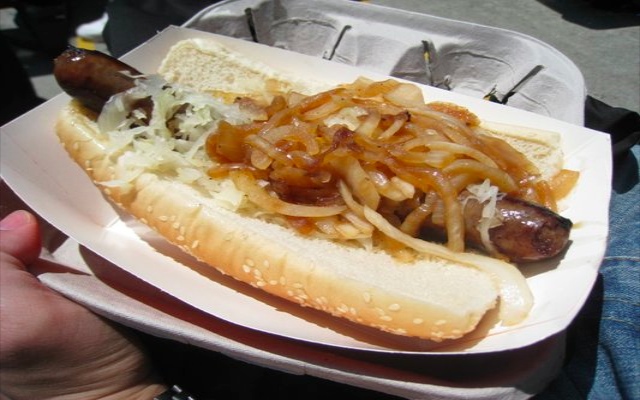 SHEBOYGAN BRATWURST STAND
If you’re craving a dog at a Giants’ game, skip the slew of vendors with those dirty water dogs and head toward the Coca Cola bottle (behind section 134) where Sheboygan is grilling up a mean bratwurst. The juicy, tangy brat comes on crusty roll that’s hearty enough to handle all the grilled onions and sauerkraut you can pile on. Finish it off with mustard and enjoy. — Whitney Phaneuf
24 Willie Mays Plaza 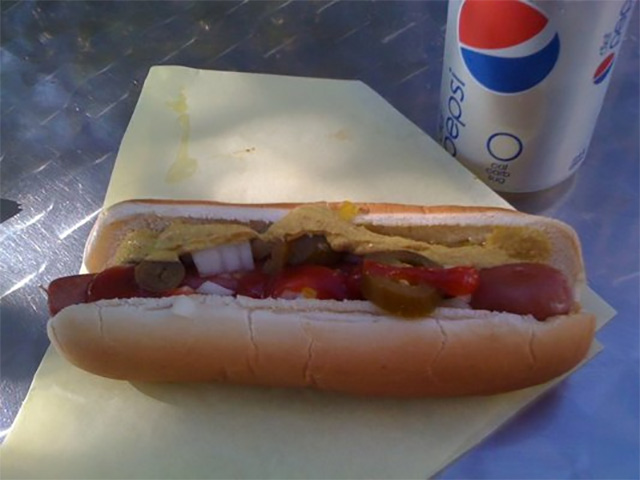 WHAT'S UP DOG!
This decade-old, local mini-empire opened its first cart at 195 Beale Street in 2003 serving New York-style dogs along with other gourmet sausages to a Financial District crowd. Since then they've expanded to four other locations in the city, and they also sling garlic fries, made-to-order corn dogs, chili-cheese dogs, chili-cheese nachos, and yes, chili-cheese fries. Also, they'll do one up Chicago-style too, with tomatoes, onion, and peperoncinis. We can't tell you what's in the dogs, but they hit the spot in the trashiest American way possible.  Jay Barmann
Multiple locations in S.F. and Moscow (!) 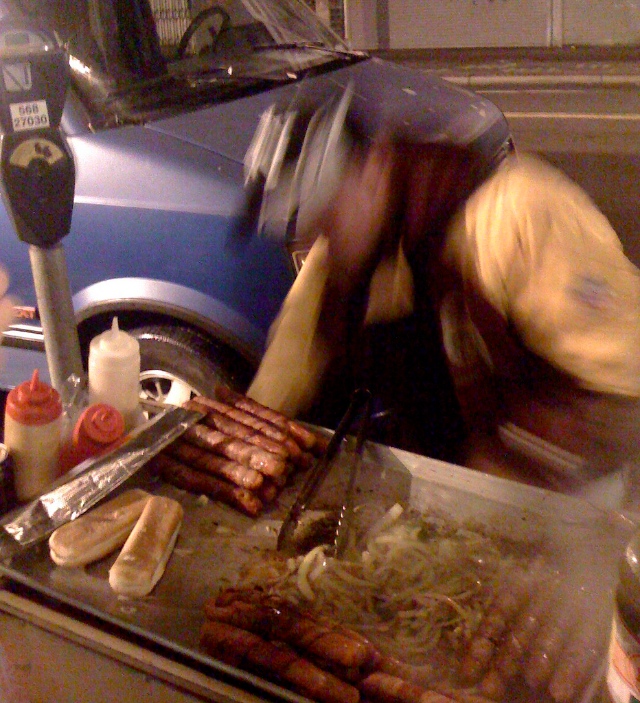 Honorable Mention
The Bacon-Wrapped Hot Dog You Found Outside The Bar While Wasted Last Week
Disgusting while sober, but deeply delicious (and necessary) in the moment. 4505 Meats housemade hot dog

I think we've found the male equivalent of master impressionist songstress Christina Bianco, and it would be downright amazing to see them go head-to-head on stage and do like 30 different duets. Meet

Planning on heading north into San Francisco on 280 this weekend? Well, change those plans, because starting tonight and running until Monday morning, you can't. Tonight at 9 p.m. northbound Interstate Highway

—
The 9 Best Hot Dogs In San Francisco
Share this