Further solidifying Hayes Valley's position as the trendiest and most centrally located of all our rapidly gentrifying neighborhoods, the Proxy development next to Patricia's Green on Octavia is getting a small outdoor cinema. Look for it to be immediately packed to the gills, no matter what the temperatures.

The project, as Hoodline reports via Envelope A+D architects, will include both a 32-foot-high movie screen and paved seating area, but also a daytime use: a pop-up fitness center for outdoor boot camps, and such. It's going in on what was a surface parking lot at Hayes, where there were sometimes food trucks.

The movies aren't set to start until September or so, following a crowdfunding campaign in July, and programming will include holiday movies, and a summer "grab bag" next year. It's not clear whether you'll be able to bring beers around the corner from Biergarten, or if you'll need to get your own growlers elsewhere.

The fitness center already had their own crowdfunding campaign last fall and raised money to construct the 20-foot-long wall that will run beneath the movie screen, and will have a set of monkey bars concealed along it. Fitness stuff will be run by Jennifer Pattee of Basic Training. As this is a community-based project, Suppenkuche/Biergarten owner Matt Hulme has designed a colorful arrow pattern that's getting spraypainted across the ground. (See rendering below.)

Construction for the fitness center should be complete any day now, and there's a launch party this Saturday, June 7 ($10 tickets still available here), with training classes on the hour all morning, and an open bar from noon to 4 p.m., as well as giveaways. 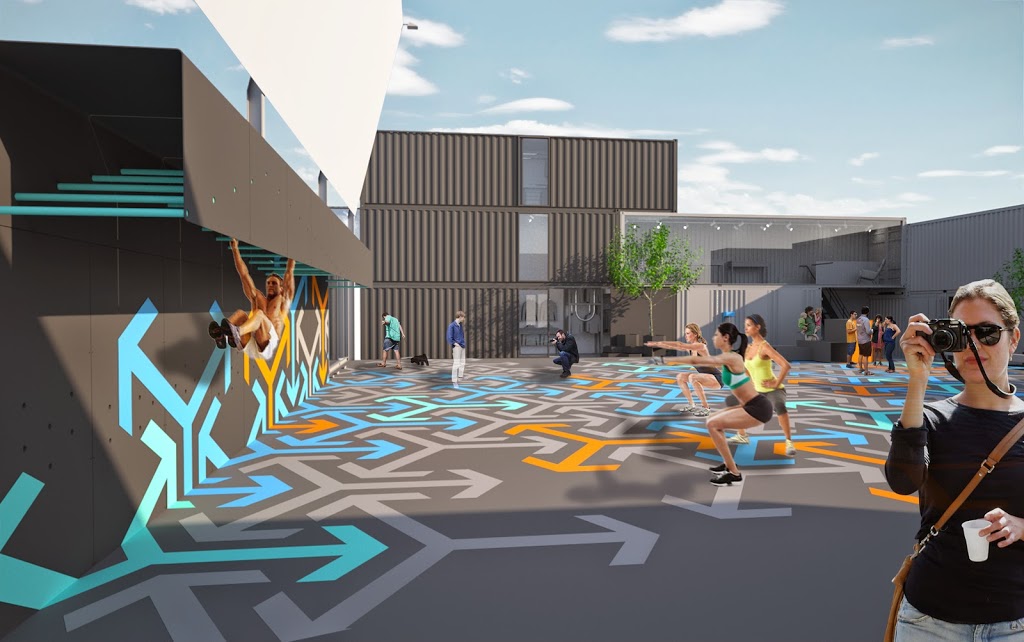 Despite a public shaming on KRON4, Oakland Mayor and Brooklyn fan Jean Quan apparently can't put down her pink iPhone long enough to make it through the week. When it comes to using

—
Hayes Valley To Get Outdoor Movies This Fall
Share this