The party is called Prison of Love, and it's a WE party, if that means anything to you. It's taking place on Saturday, June 28, Pink Saturday. Another WE party is happening in New York that same weekend, which is also Pride weekend in New York. Tickets are starting at $75 now and will only go up from there. This for shirtless circuit queens and fans of circuit-y house music. This is the promo copy:

Get incarcerated as The Armory Drill Court gets transformed into the world's largest megaclub prison yard with thundering line array sound, full color lasers, hundreds of intelligent lights, moving truss, 3D-LED video walls, and the world famous production and performances of WE Party, KINK.com, Club Universe, Masterbeat, FRESH SF and XOXO ... Grab your spot on the bunkbed and party in the prison yard with hot inmates, guards, bad boys, bitches, and muscle boys! General Admission tickets include access to the main event area and WE Party Prison of Love. Bring a cellmate, share the love!

This is the flyer: 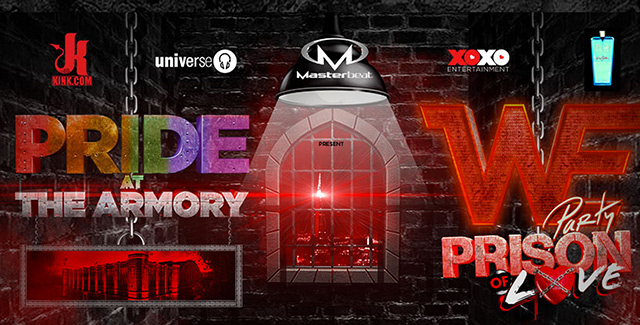 It should be noted this is not an official event of Pride weekend, nor one that's promoted by the SF Pride organization, as Jezebel's ROYGBIV blog seems to believe. Note the official Pride Calendar here.

Still, these easily offended internet voices have been circulating a letter on Twitter and a boycott notice with the hashtag #NotProud aimed at the party's sponsors that lists the ways in which their thoughtless "prison theme" is problematic. Among them, "LGBT teens comprise [sic] as much as 15% of the general population in juvenile justice facilities," and "Incarcerated trans women in men's prisons report rates of sexual assault nearly 13x greater than among groups of other people." They are encouraging people to write to the organizers and to attend SF Pride's next meeting on June 3.

Activist Jacqui Shine adds, "It's not funny. It's not sexy. Prison rape is not sexy."

After almost seven years at SFist, I end my tenure today as editor-in-chief. And what a remarkable time it's been, yes? The laughter, the tears, the furious commenters, the national press, the frantic

We would like to take a moment to thank this week's advertisers on SFist. Asian Art Museum. Yoga, The Art of Transformation. On view through May 25th. AVA 55 Ninth. Now leasing brand