In 1944, at the age of 16, Maya Angelou walked into Muni's personnel department to ask for an application to become a streetcar conductor. She had moved to San Francisco from St. Louis with her mother, Vivian Baxter (described in today's NYT obit as "beautiful and volatile"), and dropped out of high school two years earlier. She had always admired the tailored uniforms the female streetcar conductors wore, outfitted with change dispensers on the front, and she thought to herself "that's a job I want."

But San Francisco's Municipal Railway had hired only a few black people by that point, and they refused even to give Angelou a job application. (Some reports that she was the very first African American hired have been debunked by the MTA, which points to anecdotal evidence that there were a couple before her, but she was likely the first black female.)

She went home to her mother and told her what had happened, and as she recounted to Oprah last year, it was her mother's advice that helped get her the job after at first being denied.

I said, "Yes, because I'm a Negro." She said, "Yes, but do you want the job?" And I said yes, and she said, "Go get it. Here, I'll give you money. Every day, you go down and be there before the secretaries get there. You sit there in the office. You read one of your big, thick Russian books. (I was reading Dostoevsky or Tolstoy or something at the time.) And when they go to lunch, you go. Go to a good restaurant. You know how to order good food. Then go back before the secretaries get back from lunch, and sit there until they leave." I did all of that. They laughed at me. They pushed out their lips and used some negative racial [slurs].... But here's the thing. I sat there because I was afraid to go home. I was afraid to tell my mother that I wasn't as strong as she thought I was. So I sat there for two weeks. Every day. And then after two weeks a man came out of his office and he said, "Come here." And he asked me why I wanted the job, and I said, "I like the uniforms." And I said, "I like people." And so I got the job.

Also, because she was only 16, her mother feared for her safety working this job in the very early mornings. So for a while, Angelou's mother would drop her off for her shift at 5:30 or 6 in the morning, out by Ocean Beach, and follow the streetcar in her car with her pistol beside her on the passenger seat, watching to make sure she saw everyone who got on, all the way down to the Ferry Building and back to the beach, until after sunrise. Then she would honk to signal she was going home. As Oprah said, "That's a mother."

This part of Angelou's life is recounted in her first memoir, I Know Why the Caged Bird Sings, which goes up to the age of 17. She describes riding on the back of a 7-Haight streetcar collecting nickels from passengers.

See an image previously posted below of a crew of Muni conductors, in their uniforms, circa 1947, and among them you'll see several African American women. 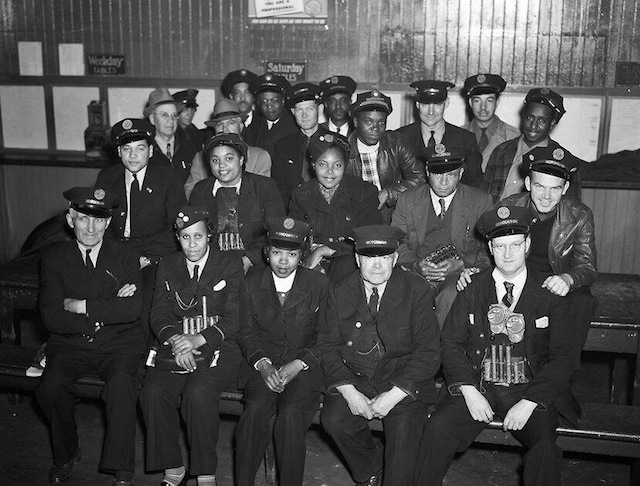 photo credit: gtrwndr87 via photopin cc People in San Francisco like waiting in line for food (a lot). Sometimes, that wait is worth it. While You Wait, SFist's guide for how to pass

An estimated 2,500 Muni drivers have packed into a class action lawsuit against their employer, alleging the Municipal Railroad has been wasting their time and failing to pay their fair share for