Up on Divisadero, 4505 Meats has debuted their little burger-and-barbecue joint in the former Brothers/Da'Pitt BBQ space on Grove Street. It's technically takeout only for now, but there is some temporary patio seating that's will be replaced by something a little nicer. Chef Ryan Farr is officially slinging brisket, ribs, sausages, and chicken, as well their famous burger (known well to everyone who's been to their Ferry Building farmers' market stand). And! He's selling a creation called the Frankaroni  that would be one of their famed bacon-studded hot dogs wrapped in macaroni and cheese and then deep fried.

The best news about this place is that they've got a dedicated burger window that stays open longer than the restaurant, until 2 a.m., to cater to all those stumbling out of The Page or Madrone Art Bar at last call.

Here's the menu. Note that they're open Sunday to Thursday from 10 a.m. to 10 p.m., with the burger window open with a limited menu on Friday and Saturday until 2 a.m. 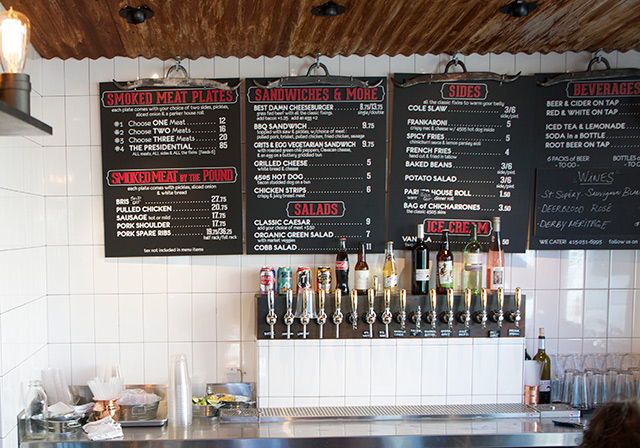 And over in Dogpatch, Monday night marked the opening of Magnolia Brewing's grand new taproom/bar and barbecue restaurant (2505 Third Street at 22nd). The restaurant is called Smokestack, and it's being helmed by Namu Gaji chef Dennis Lee. Lee is slinging "non-denominational" barbecue, meaning he's drawing influences from all over the the barbecue centers of Kansas City, Texas, and the Carolinas, as well as Asia. I can tell you right now that the chopped, smoked pork is phenomenal — don't-wait-another-day-to-go-try-it phenomenal. And the well-spiced Brunswick stew (a concoction designed for the best use of BBQ leftovers) is also stellar. It's all counter service, with seating at big, beer-hall-style communal tables, and all the meat is sold by weight  in the style of Fette Sau in Brooklyn.

The design, was handled by Kevin Landwehr and Devin Becker of Brooklyn-based Nothing:Something, incorporates a lot of reclaimed and industrial elements, and a set of backlit numbers around the beer menu (with 12-15 Magnolia brews on tap at any given time) will indicate when taps are kicked. Also, in a clever connection with the Haight Street flagship pub, Smokestack’s custom-built tabletops and benches were made with wood from a black acacia tree that used to live on Haight Street, right next to the pub, until the City had to cut down

The hours are 4 p.m. to midnight for food, and the bar stays open until 2 a.m. Lunch service is yet to come. 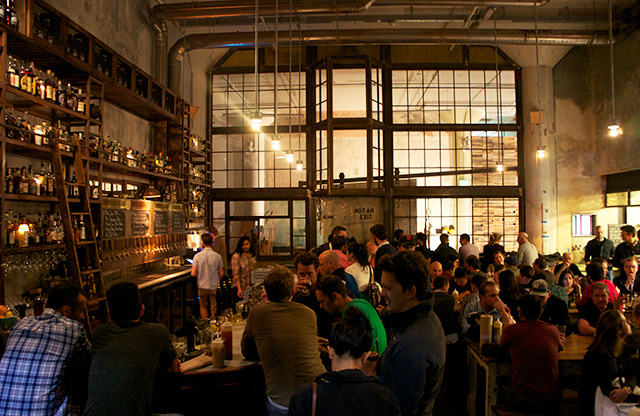 As for the brewery portion, things still look under construction, but I believe a daytime tasting/tour component may come along in the future. Nonetheless, much beer is already being brewed. And I recommend the saison.

The makers (and legal copyright holders) of Skee-Ball games have decided they are no longer kosher with a national drinking and rolling league. After nine years, the nearly century-old Skee-Ball Inc. is suing

This is downright charming, you guys. For the 20th annual Bike to Work Day, both Oakland Mayor Jean Quan and San Francisco Mayor Ed Lee donned athletic finery and took to the bike