Yes, San Francisco is a city lacking a good amount of proper rooftop bars. Blame the glacial temperatures and wind come nightfall. But what we lack in rooftop binge drinking we more than make up for in watering holes with stellar vistas. Here now are our favorite bars with a view — some way up high, others closer to street level. (Be sure to share your favorites with us, too!)

The Starlight Room
Sitting 21 stories high above the Sir Francis Drake Hotel, the Starlight Room offers "cocktails from each decade since the inception of the cocktail itself" in addition to stellar views of the entire city. The best view, in my opinion, is right at the bar. (You can see the penthouses at some of the old luxury apartment buildings!) — Brock Keeling 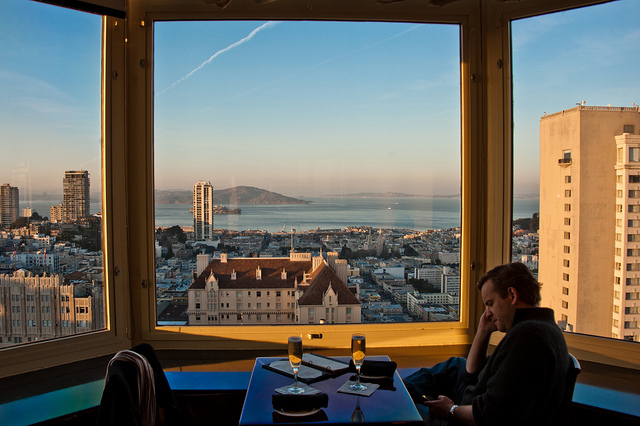 The Top of the Mark
In the '40s, the top-floor bar was a favorite date spot for local servicemen. Nowadays, you're more likely to find tourists sampling from the more questionable choices on the 100-martini menu, but there's still no place in town that beats the sweeping views from Nob Hill. —Andrew Dalton
The InterContinental Mark Hopkins, 999 California (at Mason) 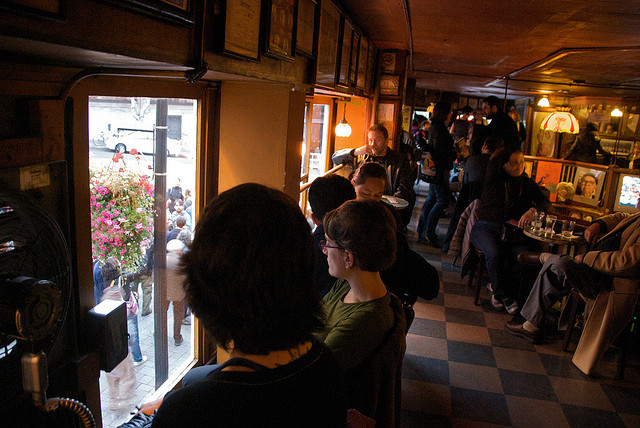 Vesuvio
While it may not have the same altitude as some of the other bars on the list, Vesuvio still has an amazing view of City Lights — the bookstore, that is. After a couple rounds you'll be dizzy enough to be glad you're not much higher than the second-floor mezzanine overlooking Kerouac Alley and Columbus Avenue. —Andrew Dalton
255 Columbus (between Broadway and Pacific) 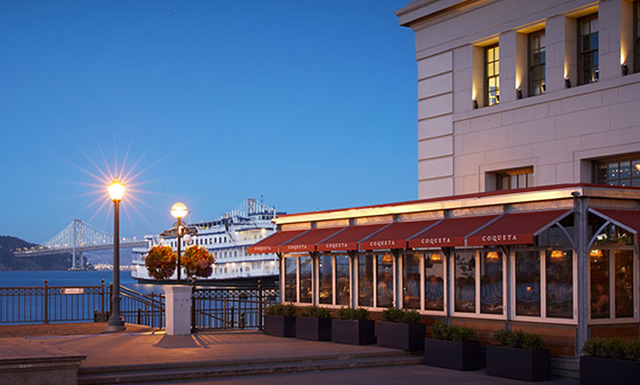 Bar 5 at Coqueta
Michael Chiarello’s James Beard Award-nominated Spanish restaurant on Pier 5 has one of the better venues for cocktails with a view on the Bay side of town. You’ll want to get in early or give your name to the host to snag one of the seats at the communal table, or grab one of the few seats at the bar. Skip the sangria and head for the more interesting stuff on the drink menu, like their selection of gin and tonic variations, or the SF-inspired Death to the Summer of Love, a combination of house-made hemp milk, Spanish brandy, absinthe, cava, and dandelions. Or, for a group, order a 500ml porron (traditional Spanish party pitcher with a spout that pours straight into everyone’s mouths) full of the Rebujito cocktail  manzanilla sherry, roasted lemon, and cinnamon soda. — Jay Barmann
Pier 5 (at Embarcadero and Washington) 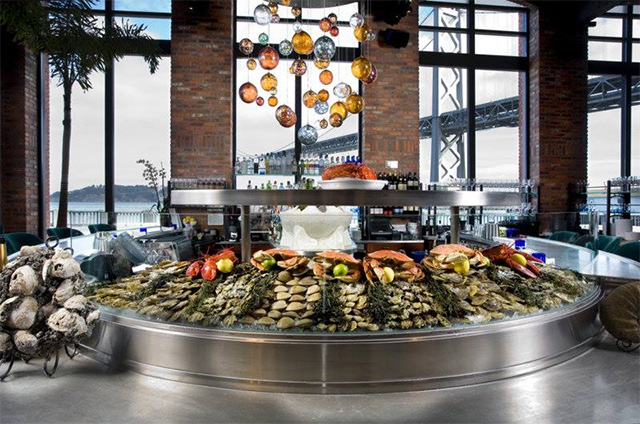 Waterbar
You won’t find a better place to impress a date, or your date’s parents, than Waterbar, where you’ll not only get some solid cocktails, an array of great oysters, and some top-notch local seafood, you will also get a perfect view of The Bay Lights from the bar, the patio, or pretty much anywhere in the restaurant. It’s not cheap, and the clientele tends more toward business-client dinners and well heeled elderlies from Atherton, but it’s also an underrated food destination where executive chef Parke Ulrich's dishes aren’t trying to condescend to tourists by any means. It’s also a great place to remember for sunny weekend afternoons when you need a place to unwind after a stressful trip to the farmer’s market. — Jay Barmann
399 The Embarcadero, near Folsom 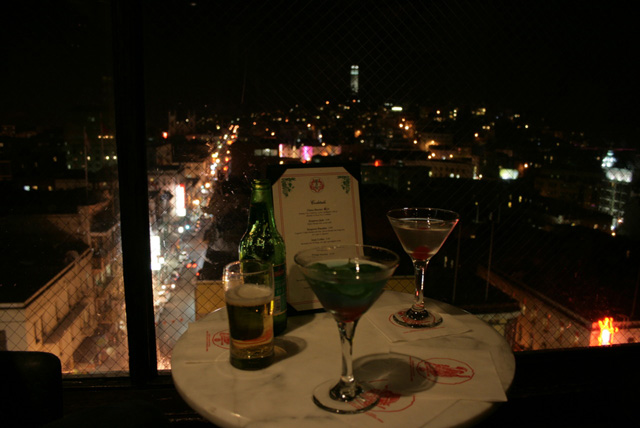 The Empress of China
This sixth-floor Chinatown bar also made it onto our list of best date bars, and with good reason—once you get through the ground-floor shops and iffy elevator, it's sexy as hell. Sip a cocktail or three as you gaze over Chinatown and North Beach, Coit Tower looming in the distance (hush, sometimes a Coit Tower is just a Coit Tower). As Andrew Dalton noted, it's hard not to get caught up in some sort of John Woo fantasy as you look off into the distance. "They'll never catch me the way they did Shrimp Boy," you'll think as you survey your domain. "Not alive, anyway." — Eve Batey
838 Grant Street between Washington and Clay 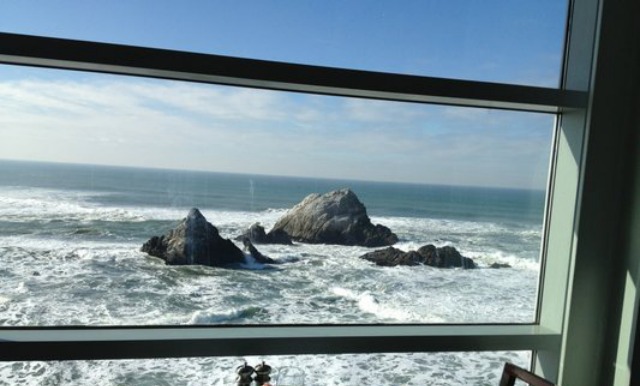 View from the Cliff House's bar by Jinjin T./Yelp

The Cliff House's Zinc Bar and Balcony Lounge
The Cliff House is a tourist attraction, it's true. But the views of the Pacific Ocean from the bars at the venues' two restaurants are breathtaking enough that you won't even notice all the SF-branded fleece in your midst. Some seats at their Zinc Bar (named thusly because it is covered in zinc, of course) might place you with your back to the ocean, but the "Balcony Lounge" that overlooks their Sutro's restaurant offers one of the finest boozy views you'll find of Ocean Beach's rocky coast. While people pack this place on sunny days, you're smarter than that: go when it's gloomy or overcast, as that's when the ocean is at her most moodily gorgeous. — Eve Batey
1090 Point Lobos Ave 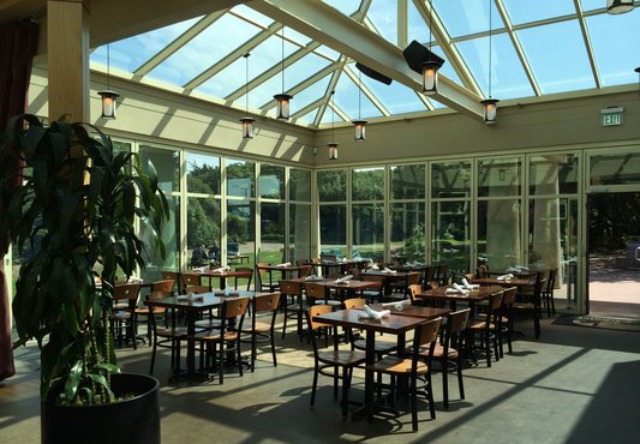 You're basically drinking outside, but without all the yucky outside stuff, at Park Chalet. Photo: Joan T/Yelp

Park Chalet
If Ghostbusters had been set in San Francisco instead of New York, Rick Moranis would have been yelling "nice doggie!" outside of Park Chalet, not Tavern on the Green. Yes, just upstairs diners at Beach Chalet are gazing upon Ocean Beach, but the positioning of their bar leaves drink-seekers craning their necks for a view of the outdoors. There's no craning necessary downstairs at Park Chalet, where the entire room (glass ceiling included) is looking out on Golden Gate Park. It's also a great place for serious beer drinkers, as brewmaster Aron Deorsey oversees a list of eight housemade brews. Order their Sampler Set (it's only $13) to try them all as you watch GGP silently kick Central Park's ass. — Eve Batey
1000 Great Highway 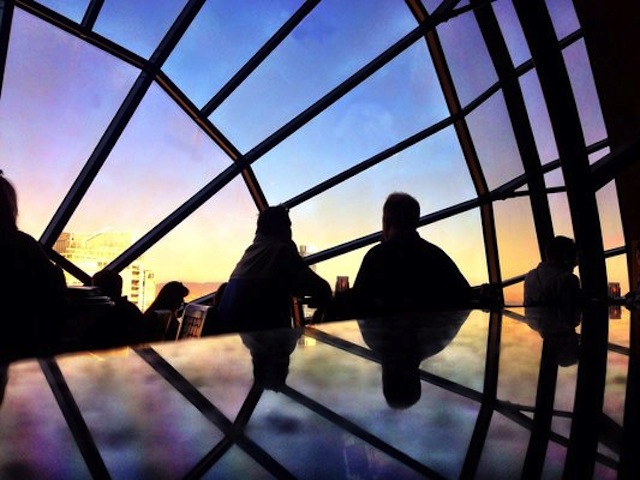 The view at The View. (Yelp)

The View
Well, my favorite thing to do at The View was to start out with a couple cocktails, saddle up to a table by the gargantuan window, and then gaze into the private residences at the Four Seasons next door. "Who are these sons of bitch," I'd demand, in between gulps. "And why don't they invite me to their awful yet fabulous dinner parties with tiny forks? Assholes." Stewing on one's own bitterness or not, The View offers some of the best sweeping vistas in San Francisco. Though the menu is a touch dated, this SoMa/downtown staple inside the Marriott (not-so affectionately nicknamed "the jukebox") pours heavy, large drinks (if memory serves) and can turn almost any awkward date into a romantic one. Best during sunset.
55 4th Street at the San Francisco Marriott Marquis Hotel 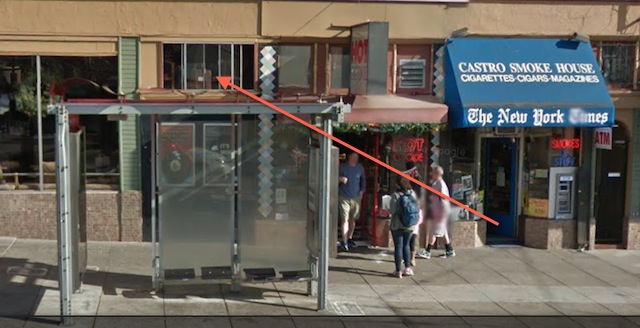 It doesn't look like much, sure, but once you're up there, you'll have a grand old time watching passersby. (Photo: Google Street Views)

Those two seats by the window on the mezzanine level at Twin Peaks Tavern
Views of the Bay? Barf. Views of the Bay Bridge? Shove it. Views of our glorious, sparkling cityscape? Kindly go to Hell. The best bar view is of YOU. My favorite bar view in the city, when I used to throw back seven gin martinis in one sitting, was on the mezzanine level at Twin Peaks Tavern, right next to the window. On the nexus of Castro, Market and 17th, there's no place better to watch cute gents, naked dudes, and your drunk friends stumble along. Wave hi to that hot guy you've always liked. Throw shade at that Stockton queen in an A&F v-neck, sporting frosted tips. Open the window and ask those two conservative-looking Hastings Law students to make out on the sidewalk, all for your disturbing voyeuristic pleasure. This is an interactive view. folks. (Also, take a deep whiff once inside the mezzanine's bathroom. The window is next to the air vent at Hot Cookie. It reeks of cookies in there.) — Brock Keeling
401 Castro (at 17th Street)

Sunset at the Top of the Mark. (Photo: Meg Lauber)

Fans of chef Kim Alter's food at Haven in Jack London Square were sad to learn that she was no longer in the kitchen there as of last fall. But owner Daniel Patterson

The San Francisco Film Society has announced that this year's recipient of the Peter J. Owens award for excellence in acting will be Jeremy Irons, an artist recently known as much for his