Many denizens of the Castro and Lower Haight have bemoaned the now blighted, three-years-vacant former Home restaurant property, which lost the chance to become a Chipotle last year and has languished ever since. Now we're seeing some movement as a preliminary project assessment request has been submitted to Planning for 2100 Market Street for a project that would involve demolishing the existing 2-story structure to build a 7-story condo development with 4,700 square feet of ground floor retail.

As Hoodline reports, this is all still highly preliminary and does not represent an actual plan for construction  such assessments are a service provided by Planning to give developers an idea of what obstacles they might face. A similar project assessment was filed by the owners of the Elbo Room property earlier this year, leading to speculation that that beloved Mission bar might not be long for this world.

Neighbors and the current Planning code both worked against Chipotle's 2013 bid due to existing formula retail rules  and anti-chain sentiment protecting existing taquerias nearby  however experts have noted in the past that fixing up the property and restoring its liquor license were likely expenses that a smaller operator would not be able to afford.

It's unclear when or if the property changed hands or who the developer behind the new project might be, but we've reached out to Supervisor Scott Wiener's office for any info they might have.

Suffice it to say, with neighbors suddenly more tangibly aware of what it feels like to have 5+ story buildings going up or recently constructed on every block of Market between Dolores and Noe Streets, the prospect of another one on this prominent block might lead to a fight. Then again, what's another condo building/luxury rental when the neighborhood just got five of them, with at least one more (at Sanchez and Market) in the works.

Update: The SF Business Times has the rendering of the building, designed by Arquitectonia, so clearly this is more than just a concept proposal. The developer behind it is Brian Spiers, who developed the Linea up the street. See below. 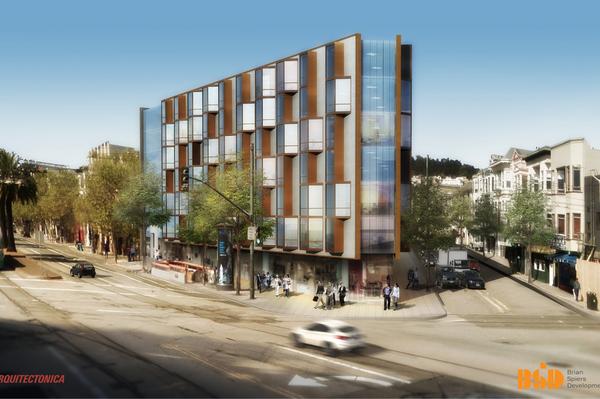 If you ever thought twice about the money-saving you were doing by hiring a Super Shuttle for that 4 a.m. airport trip instead of just getting a cab, get this: An SFO-bound