Dolores Park is done. It's also partially closed for repairs. And with that, it's time to find somewhere else to go on blistering days. But where? Revised from our 2013 list, here are our favorite outdoor spots to feel like you're in a different world, even if you're right in the middle of it all. Let us know your favorite outdoor spots. (We know you will anyway.)

Baker Beach
It’s arguably San Francisco’s prettiest beach. It’s the original home of Burning Man (ca. 1986-1990). It’s the semi-nude beach that looks like it’s the closest one to the Golden Gate Bridge from where you’re taking that selfie  but that honor actually goes to the narrower, gayer, dirtier stretch of sand past the rocks to the north, Marshall’s Beach, accessible only by a winding coastal trail and recommended only for the non-faint-of-heart. And because people are lazy, the northern, more naked portion of Baker is often your best bet for finding some open pieces of sand on one of our 20 hot days a year, because it’s a long walk from the public parking lot or a steep climb down the sand ladder to get to it. Turn right at the base of the sand ladder, and you will find clothed and non-clothed homosexuals, pansexuals, polyamorists and the like (and tolerant straight people). Turn left (south), and things gets a bit straighter, getting more family-oriented and paddle-tennis-friendly the closer you get to the parking lot. And, yes, there will sometimes be naked volleyball on the northern end, complete with flopping dongs. —Jay Barmann
Gibson Road, in the Presidio 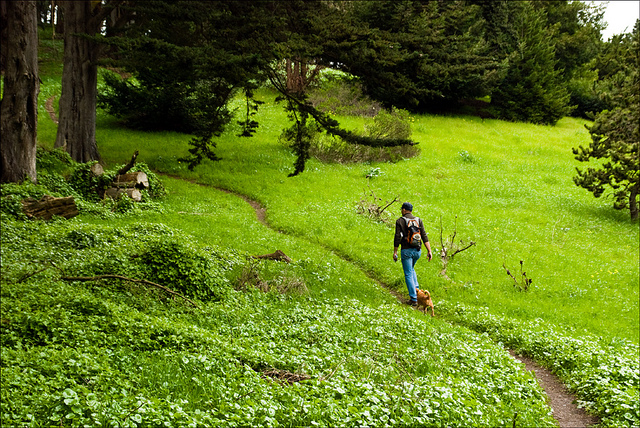 McLaren Park
Did you know that San Francisco’s second-largest park, topping 300 acres, is right down in the southern end of the city between Visitacion Valley and the Excelsior? One of our most unsung gems, which may be unsung because it’s a little hard to get to, is McLaren Park. It’s home to an entire public golf course (Gleneagles), two little lakes, two playgrounds, two off-leash dog play areas, the not-often-used Jerry Garcia amphitheater, some beautiful, rolling hillsides, and occasional coyotes. Also, there’s a 2.7-mile-long loop of trails called Philosopher's Way, completed in 2012, with 14 “musing stations” that include stories from longtime residents and literary quotes. —Jay Barmann 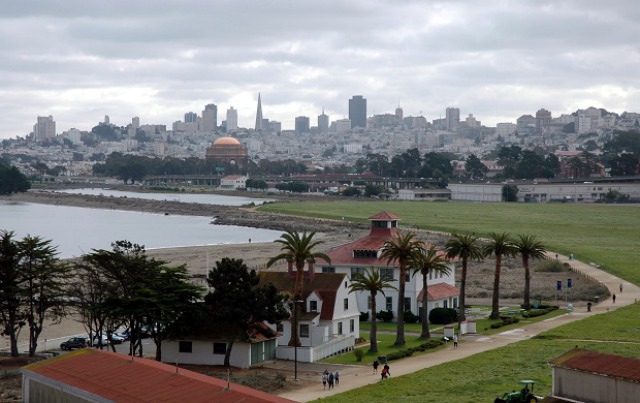 Crissy Field
Described as "the Presidio's 'front door,'" Crissy Field is basically where transplants think San Franciscans all hang out, as nearly every SF-set show has a Crissy shot in it sooner or later. But are they wrong? On a weekend visit to Crissy you'll see everyone from healthily affluent couples with strollers that cost more than your first car, tourist families bracing against the "cold," and local teens screwing around the way kids do. Here's my Crissy jam: I park at the Crissy Field Center lot, then walk west along the beach and path all the way to The Warming Hut. Tie up the dogs outside, go in for coffee and pastries. Eat at a picnic table (mind the birds), then walk back in the middle of their beautiful greenway (and former airfield). You'll cover a few miles and the dogs will be pooped, but it's a great way to spend an afternoon. —Eve Batey
1199 East Beach, in the Presidio 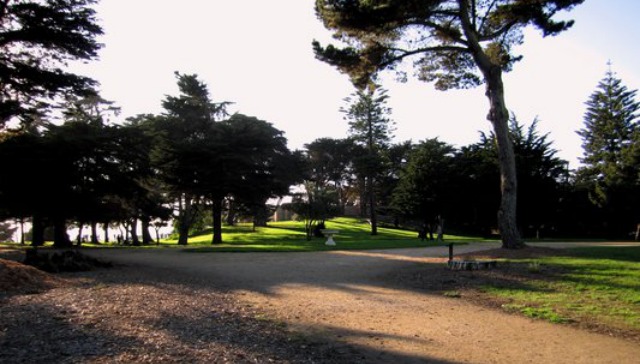 Sutro Heights Park
Sutro Heights Park is one of the Outer Richmond's greatest gems, a lovely lush park that overlooks Ocean Beach and Lands End, but is just out of the loop enough to be quiet on even the hottest, touristy-est days. Once the statue-laden estate of Adolph Sutro, the city demolished his mansion and turned it into Sutro Heights Park after his daughter's death. But parts of the foundation and a few statues remain, sweeping you out of the city and straight into Narnia. On the weekends, there are a lot of weddings here (my dog's interrupted at least one, oops), but just skirt the ceremony and walk straight up to the western edge of the park (where Sutro's castle once stood, can you imagine?) to see one of the most amazing views in the city. Yup, you live here. —Eve Batey
Between 48th Avenue and Point Lobos Ave 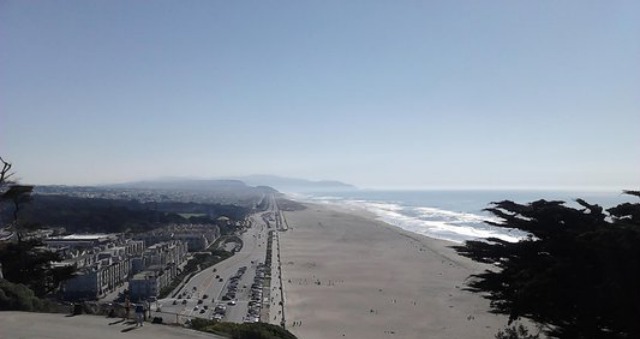 Ocean Beach
Ocean Beach can be a harsh mistress, and I'm not even talking about the surfing. It can be cold and windy, sometimes you have to climb dunes to get there, and there's always some giant off-leash dog running straight towards you who might be friendly...or not. But, it's also 3.5 miles of pure beach, unsullied by giant hotels or fenced off areas or guys lifting weights. This is what a San Francisco beach is supposed to be like: gorgeous, a little treacherous, and open to all humanity. You can have bonfires in the provided fire pits (roughly between Lincoln and Fulton) and run your dogs off-leash from Stairwell 21 (basically, across from Beach Chalet) all the way to the Cliff House cliffs. I will note that many Ocean Beach surfers (both genders) change their clothing in the parking lot, which is a reason to avoid or head straight to the area, depending on your voyeuristic position. Pro tips: bring a jacket even if it's hot where you are, hit the restroom (there aren't any on-site facilities), and don't tote drinks in glass containers (they're not allowed, and people do get fined). —Eve Batey
The western edge of San Francisco, all the way down Great Highway 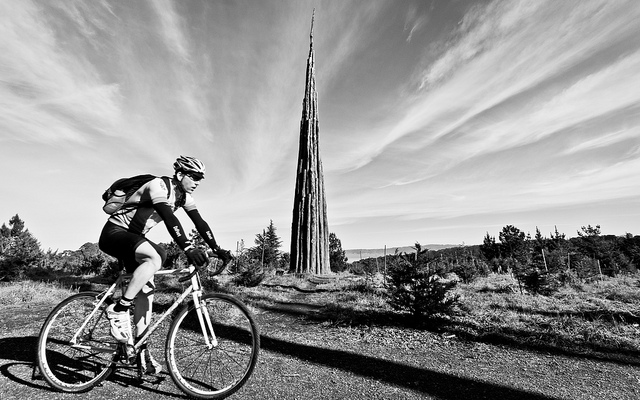 The Presidio
With hidden beaches, a cliffside hiking trail and lush eucalyptus forests the Presidio offers multiple ways to get outside without leaving town. To focus your woodland meanderings, seek out Andy Goldsworthy's trio of art pieces: Spire, Wood Line and Tree Fall. Alternatively, you can just skip nature altogether and go have brunch on the patio at Presidio Social Club or on the lawn for the Presidio Picnic. —Andrew Dalton 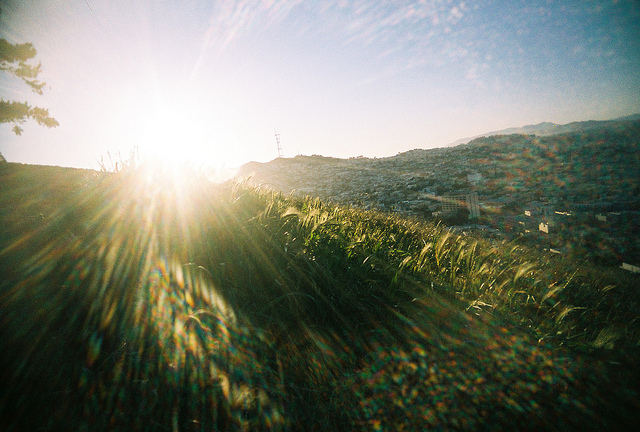 Bernal Heights
For our money, Bernal still hosts some of the finest views of San Francisco and without allt he tourists. Come for sunrise over the bay, or a renegade piano concert at sundown as the city lights up. Or just come in the middle of the day to relax into the hill's steep slopes and make yourself a crown of California poppies. Bonus: you get to stroll through blocks worth of Bernal's charming architecture to get there. —Andrew Dalton 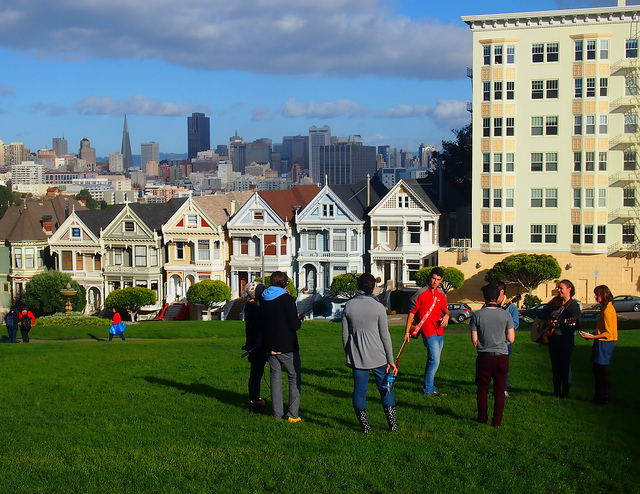 Alamo Square Park
What Alamo Square lacks in acreage (See: Golden Gate Park) and hip/gay cachet (Dolores), it makes up for in nostalgia thanks to a backdrop that is basically the platonic ideal of San Francisco. Which much of Dolores closed for 2014, expect a slight shift in demographics. —Andrew Dalton 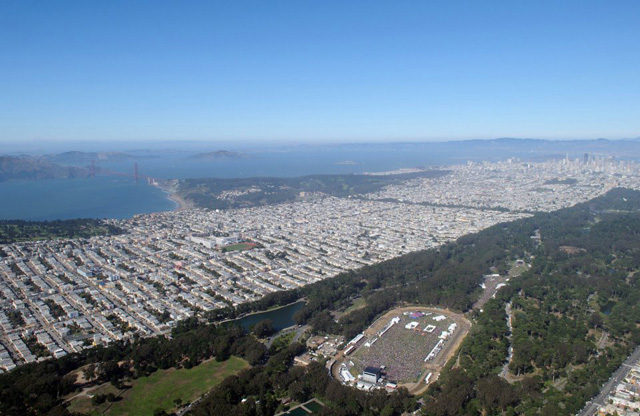 Letting it all hang out at Jane Warner Plaza
If you want to stick it to the man, head over the the Castro wearing one of those weird bikini underwear thongs that hold your nuts snugly in the front, but reveal your buttocks in the back. You'll be sure to shock those squares...from 1969. —Brock Keeling 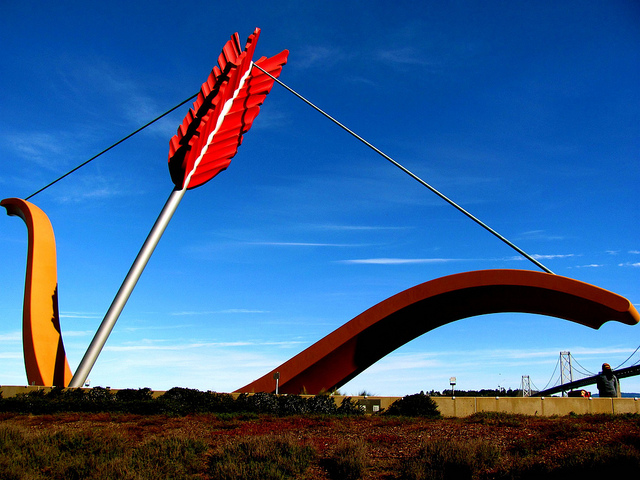 The Embarcadero
It doesn't get better than a jaunt along the Embarcadero on a sunny day. The bridge, the bay, the ballpark, the bow and arrow... this is the route I take when I need cheering up. (Add roller skates and short shorts for extra special fun.) —Brock Keeling

South Park
This European park hidden in SoMa was featured in Rent and Blue Jasmine. One of San Francisco's oldest parks (dating back to 1854), it's a hot spot during the lunch hour with tech ilk and local color alike. The weekends are more quiet. A serene place in the sun that very few frequent. —Brock Keeling

Now that Google Glass has gotten a nice reputation as an exclusive toy for nerds, celebrities and rude bar patrons, the company will graciously open up sales of the $1,500 device to