Last night was the third edition of the Mr. Marina Competition, the city's premiere male beauty pageant where grown men compete for the adoration of an entire neighborhood. The winner gets their name on a plaque at Bar None and a year of bottomless mimosas, among other things. The event capitalizes on the endless entertainment value that comes from watching (or hate-watching) dudes as they try to become the most impressive person in the room. This year it raised over $155,000 for the Leukemia and Lymphoma Society.

My wingwoman was Mr. Marina first-timer and trusted skeptic Rose Garrett, who also shared my drive to take advantage of the remaining minutes of the sponsored bar. This year Jack Daniels Honey Whiskey, a low calorie 90-calorie lemon-infused light beer, and a brand of quinoa vodka all agreed to donate product in exchange for placement in front of some of San Francisco’s heaviest consumers of oddball liquors. This demographic is the reason why Fireball Cinnamon Whiskey is a thing that people think they actually enjoy drinking. This is the crowd that popularized Jager Bombs. These are the bright young minds that came up with Bear Fights. And as it tuns out, honey flavored whiskey and ginger ale tastes terrible. Rose says it “tastes like Harry Potter.” Who are we to turn down a free drink though?

The event sold 1150 tickets and from our spot in the balcony VIP section, we estimated there was about a 60/40 female to bro ratio in attendance. The front of the crowd was packed with women who looked like they hadn’t had as many hangups with the free booze selection as we did. Supportive parents were mixed in throughout the crowd, many of them seeming like they didn’t quite know what to make of this whole thing. The dress code for the night, according to an email reminder sent to all attendees, was “Marina Style” or “whatever you would wear for a big night out in the 94123.”

“Do something really Marina!” -the best photographer here, who just got a photo full of duckface.


After taking a moment to thank the event’s sponsors — which included a new branch of an upscale gym and an app for dry cleaning — event organizer Brianna Haag asked the crowd how many of them took an Uber to the venue. A significant portion of them, judging by the response.

Backstage, backup dancers in the sort of dayglo outfits you only see at Bay to Breakers and in American Apparel ads were vamping for a cameraman. The opening number was a dance routine to “Hold On” by Wilson Philips, which you might remember as the final number in Bridesmaids.

The panel of judges for the night’s event were: former Miss California Crystal Lee, who is a Stanford Grad and a Silicon Valley hopeful in addition to being a pageant queen; last year’s winner Ish Simpson, who wore a plastic crown the entire night; recent The Bachelor contestant Kat Hurd, who spent a lot of time taking selfies behind the judges table; and LLS Senior Director of Special Events Michelle Flatley, who has an impressive record of fundraising and whose career could only benefit from a successful Mr. Marina campaign.

The Swimwear round is first and each of the 12 contestants gets to strut out to the mic and deliver their best one-liner answering the question, “Why should you be Mr. Marina?” The answers ranged from lame stereotypes “Because I frat hard at Fort Mason" to cheesy pickup lines, offered in earnest while there were moms in the crowd. Jieren Chen came flopping out onstage in a mermaid tail and stood up the the mic to deliver: “I should be Mr. Marina, because I'm a real catch.” Which was perfect, actually.

Jeff Zeller, who looks like a smaller version of Daniel Craig, gave us a glimpse into the limitlessness of the male ego that we would see over the course of the night. Wearing bermuda shorts, a dog tag and white Ray-Bans branded with the name of the terrible whiskey I was still regretting, Zeller stepped to the microphone and delivered some Beyoncé, “When all the girls meet me, they fall Drunk in Love. That’s why they call me JAY. Z.”

Historically, the talent portion has been by far the most entertaining portion of this whole production. The first year was dominated by feats of turbo drinking. The second year saw a little more variation, but most were a version of “dancing provocatively to music.” This year, there was some mindblowing talent, but first: Jeff Zeller, taking the obvious route, donned a bearsuit and rapped his way through Macklemore’s “Thrift Shop” before ending it mid-song to burst into a Harlem Shake.

Jason Root, who has an impressive beard and a mustache that would later be waxed and twirled, was doing some kind of Gangnam Style thing alone in a spotlight while wearing a half-off pair of denim overalls, making the whole thing look borderline insane. He ended his routine by taking a selfie in front of the crowd. Patrick Doyle — the contestant with the most impossibly heroic chin — attempted to saber a bottle of champagne, because "that’s how we do it in the Marina,” he announced. Except he fumbled it and dropped the bottle on the first attempt. Then doused himself with champagne when he finally popped it off. Presumably that was meant to extinguish the flames of embarrassment.

In what was by far the classiest move of the night, Ward Sorrick donned a Patrick Swayze wig, led his dance partner to the middle of the stage and proceeded to cockblock every guy in the audience by completely nailing it on an amazing Dirty Dancing routine. Sorrick is no Frat Mason slouch either, at the climax of “Time of My Life” he and his partner stepped back to opposite ends of the stage, gave a little nod and ran, full-on into a lift that literally made people in the balcony jump out of their seats. Rose announces she is now completely and unironically into the Mr. Marina Pageant. I have a confusing crush on a dude in a Swayze wig and Sorrick gets perfect scores across the board. 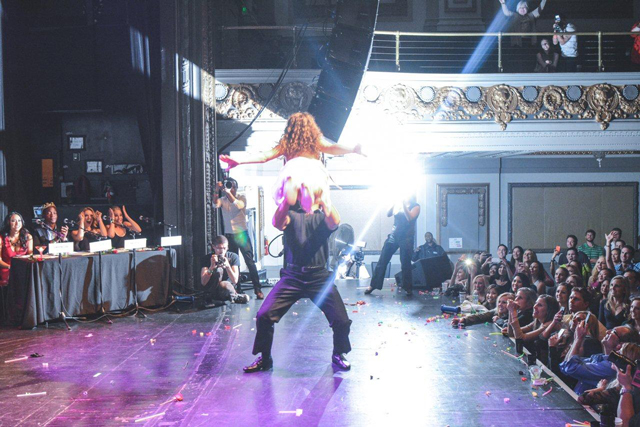 Before the boys trotted out one more time in their Marina wear, bottles of Fireball and pint flasks of Jameson were drained in the dressing rooms backstage. Onstage, the outfits range from plaid suits to pink shorts to polar fleece. Except for Stephen Patkay, who came dressed as the popcorn machine from Monaghan’s because, “at the end of the night, all the girls want me." But jokes were starting to fall flat. At the end of the night, everyone actually just wants to get out of here so we can stop paying $10 for beers.

Finally, after the tabulating scores and factoring in how much money each contestant raised in the weeks leading up to the event, the winners were:

After that the crowd bailed pretty quick. Chattering on the sidewalk about after parties and bars on Polk Street and celebrations back on Lombard. For the next year, Zeller will be treated like royalty in the Marina — or at least get a nice discount at local businesses. Like 10% off all of his Uber rides to and from the neighborhood and and endless font of mimosas during brunch at Circa. He's frat president of a community that still operates by the "Work Hard, Play Hard" college motto. He helped raise a boatload of cash for cancer research. And next year he'll be back to pass on the plastic crown to the next bro who excels in all the areas of Marina-ness. Just one big selfie, going on forever.

Sixty years after Bill Haley's version of "Rock Around the Clock” "became an anthem for rebellious Fifties youth," a high-profile Los Angeles attorney allegedly used it to fight for her right to party