Over on Dolores on Monday night, two Zipcars were set ablaze in a residential parking lot at Dolores and 15th Street. A reader sent us the details:

I live at 240 Dolores Street and heard two explosions around 8:30 PM. Two Zipcars parked in the car park of the adjacent building (230 Dolores) were on fire. SFFD responded immediately with 4 fire trucks. Residents evacuated. Major damage to adjacent cars. I overheard an officer on the phone referring to the incident as possible arson. I asked members of the tow company removing one of the cars if the fires were intentional and they said yes. Very scary! 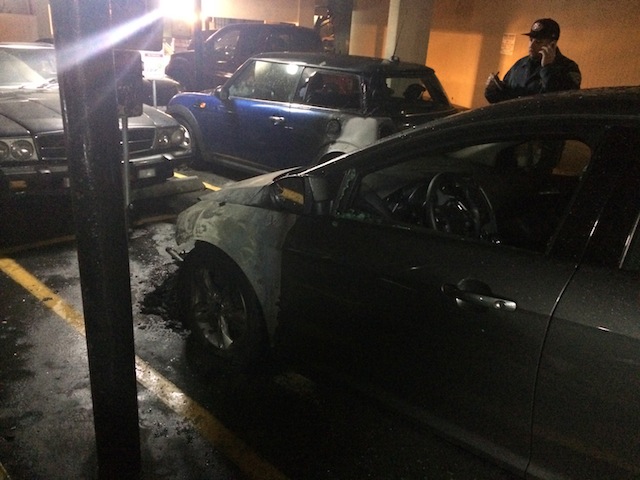 The SFPD report notes: "SFPD responded with fire department to the above location. Four vehicles were damaged and one of the four was towed. Incident remains under investigation."

Noting that "residents of the building were not evacuated as one reader commented," Zipcar sent SFist the following statement:

"Zipcar recently learned of a fire involving one of our Zipcars in the San Francisco area. There were no occupants in the car at the time of the fire and we are thankful that no one was hurt by this incident. Zipcar is fully committed to the safety of its members and we are collaborating with the San Francisco police department in its investigation."

The remains of one of the Zipcars.