It's now come to this.

A group of (obviously gay) young gentlemen in the vicinity of the Tenderloin are advertising on Craigslist this week for a new male roommate. They aren't requiring candidates to be gay, though "queer friendly" is specified, but they will be requiring prospective roomies to strip down to their g-strings or tighty-whities and compete in a wet underwear contest. The winner gets the room for a mere $400 a month, basically a golden egg in the current market. "Runner-ups may get dates."

This is so Tales of the City. We love it. 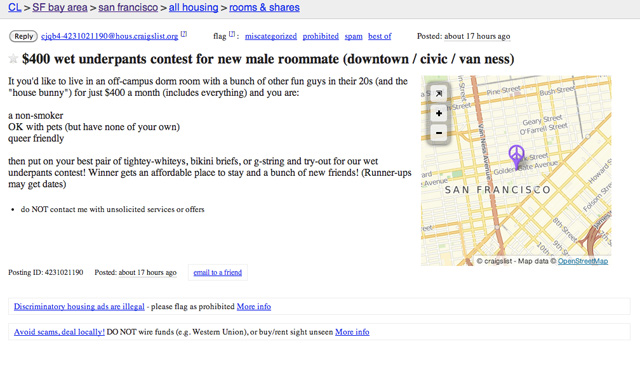 We would like to take a moment to thank this week's advertisers on SFist. Speck. Help your iPhone feel confident naked. Shop cases and more. Google, now offering Google Shopping Express. Same day

Now that San Francisco is officially the most elite city in America, shouldn't we have a public transportation system that works? Or does our dysfunctional transit system point to an elitism at work

—
Would You Compete In A Wet Undies Contest To Get $400 Rent?
Share this