It's Monday and you're actually going to have to deal with your work inbox, since Facebook is refusing let anyone to update their status now. Or let them do much of anything else except look at people's weekend photos of their children in pumpkin patches.

The problem seemed to occur a few hours ago, a.k.a. the waning moments when Stuff Actually Happened. Mashable reports, "For reasons yet undisclosed, Facebook currently doesn't allow updating your status... Facebook status update problems aren't uncommon, but this one seems global — we've tested it from several IPs, receiving the same message. In addition to status update issues, we were also unable to Like anything or post photos on Facebook."

Mashable added that it seems to be a service disruption. So leave your BART Strike complaints to Twitter!

Update: Now Facebook has updated its error message: "Something went wrong. We're working on getting it fixed as soon as we can." 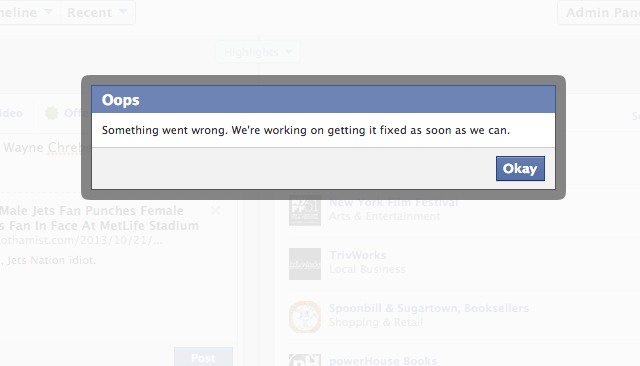 A shooting occurred this morning at Sparks Middle School in Sparks, Nevada, next door to Reno, around 7:15 a.m. Details are still coming in, but as the Reno Gazette-Journal reports, at