Storied stripper and living legend Carol Doda, who single-handedly defined North Beach's red light district of the 1960s, was arrested Saturday night on suspicion of drunk driving after her car collided with a parked car in Jackson Square. Doda appears to have been trying to get home and was passing outside 5A5 Steak Lounge (244 Jackson Street) when her Acura collided with another vehicle that a valet had double-parked.

As Matier & Ross report, police on the scene say that the 76-year-old Ms. Doda smelled of booze and was so unsteady on her feet that they decided not to continue with a field sobriety test. They took her back to Mission Station and tried to administer breath and blood tests, but according to the report she kept saying that she didn't understand, so no tests were given.

Ms. Doda told police that she had had "a couple of drinks" at Gino and Carlo, one of her favorite hangs and where she'd recently been known to sing on certain nights.

A police captain has suggested that Ms. Doda's driver's license will be automatically suspended as a result of Saturday's incident, despite the inability to administer an alcohol test.

Doda is best known for being a topless performer at the Condor Club in North Beach, where there's even a historic landmark plaque (see below) dedicated to her first topless performance (June 19, 1964) and her first bottomless performance (September 3, 1969). Famously, she used to be lowered into the club atop a piano, bearing her 44D breasts. San Francisco was pioneering when it came to topless bars, strip clubs, and porn in general, and the Condor Club lays claim to being the "world's first topless bar." She is currently the proprietor of her own lingerie boutique on Union Street called Champagne and Lace. 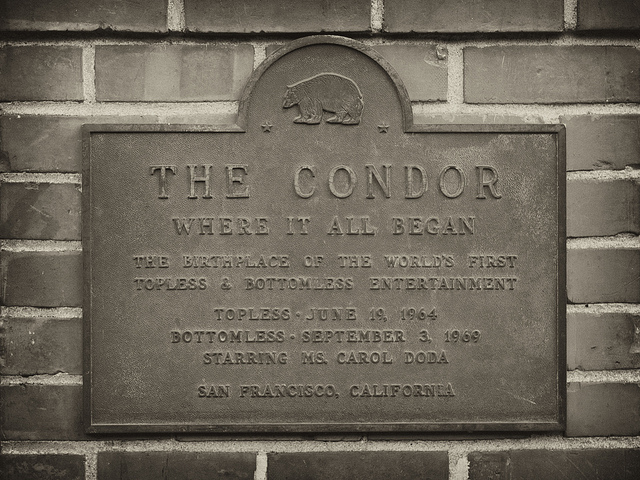 A 29-year-old woman became some kind of monster earlier this week when she walked into a Walgreens store at Market and Third Streets, sprayed lighter fluid all over an aisle full of cookies