While some vegan places are affiliated with a fucked cause or gross or both, San Francisco is awash mighty fine vegan establishments that will make you rethink food. Here are our favorite places in San Francisco to appreciate a meat-free/dairy-free lifestyle.

Golden Era Vegetarian
Not just one of the best vegan restaurants in San Francisco, one of the best restaurants, period. This Tenderloin staple specializes in Aulacese, Chinese, Indian, and Thai that omnivores will also love. Favorites include Lemongrass Deluxe, Hu-tieu soup, and the Truly Sea (crispy pan fried soy “fish” with ginger sauce).

Saha
This spot inside the Carlton Hotel has something for everyone, from vegan and gluten-free folks to meat eaters. With an "arabian" theme and dishes like the Maklouba (layers of rice with allspice, pine nuts and cinnamon, eggplant, marinated tofu and caramelized onions with harissa), it's a satisfying option for vegans looking for more than just veggies. Get the vegan Bisbusa (Yemeni cake with syrup and gelato) to top off your meal.
1075 Sutter (at Larkin)

Cha-ya:
This vegetarian Japanese joint is a classic hit for vegans and healthy eaters in general. The sushi rolls include options like the vegan roll (spinach, atsuage tofu, cucumber, broccolini, pickled burdock, seasoned shiitake, kampyo gourd and pickled ginger), and the legendary soba salad are just two of an array of delicious vegan dishes that won't disappoint.
762 Valencia (at 19th Street) 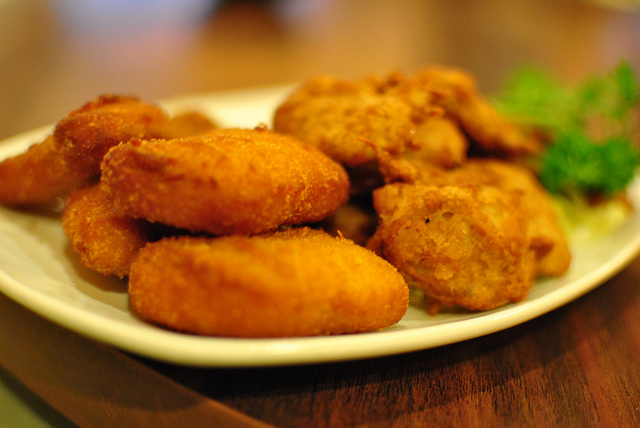 Enjoy Vegetarian
While the decor is dive joint-chic, diners won't find any MSG-laced or egg-fried items on Enjoy Veggie's expansive menu. Adventurous vegans would do well to explore the more exotic items like the faux shrimp in a walnut sauce and veggie shark fin soup, which is guaranteed to contain exactly zero actual shark fin. It may not offer the same mystical benefits as the real thing, but you'll make up for it in good karma.
754 Kirkham (at 12th Ave), 839 Kearny (at Washington), 5344 Geary at 18th Ave.

Loving Hut
With three locations in SF, this Chinese-driven chain is your best bet for vegan eats before or after shopping and a movie at the Westfield Center, or roaming around North Beach or the Sunset. It's the brainchild of Supreme Master Ching Hai, whose "family" owns and operates the entire chain, with a number of other locations in California and around the world. There are a lot of claypot-type dishes, with virtually everything featuring a soy-based faux meat, including the Ocean Basket featuring some Vegansaurus-approved faux shrimp. Also, there are veg burgers and fries, and free booklets that extoll the virtues of saving the planet via vegetarianism/veganism.
Three S.F. locations 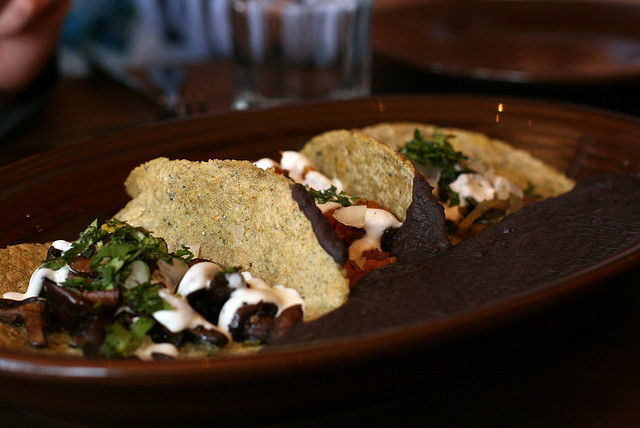 Gracias Madre
Gracias Madre's mothership, Cafe Gratitude, closed under heaps of scrutiny due in part to its philosophical leanings and backstage drama. But don't let that stop you from enjoying some of the nicest vegan fare in the Mission. Chilaquiles (tortilla chips simmered in a spicy tomato salsa, drizzled with cashew crema, cilantro and avocado, served with black beans), the open face enchiladas, and the peach cobbler are noteworthy.
2211 Mission (at 18th Street)

Millenium
This fine-dining establishment hits the jackpot with endless options for vegan eaters, like the vaunted crusted king trumpet mushrooms with arborio rice and coriander seed dredge, cabbage and carrot salad, citrus-yuzu ponzu and green tea togarashi. Almost everything here is vegan, and with oodles of small plate, entree, salad and dessert options, you will not go home hungry.
580 Geary (at Jones) 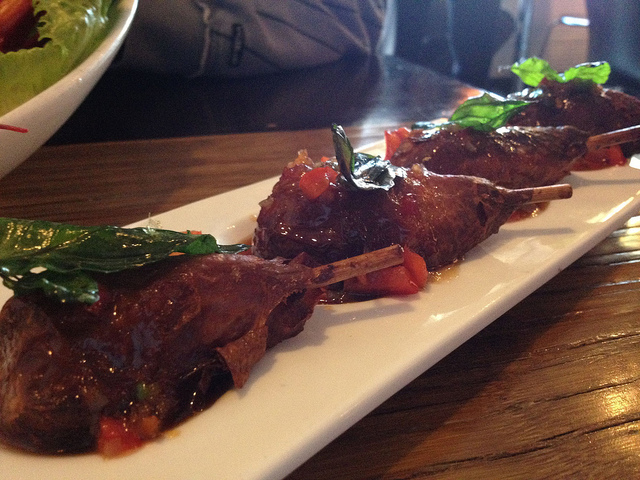 Thai Idea
While Thai Idea will make fantastic veggie versions of your favorite takeout standbys, the place really shines with decoy meat items like mock duck confit and panko-breaded Firecracker balls with a plant-based version of Ahi Tuna. Vegans will want to dodge the rice dishes fried with an egg, but everything else from the "Lamb" Curry to the Volcanic "Beef" to the Avocado "Shrimp" is within your dietary restrictions.
710 Polk Street (at Eddy) or 3221 Mission Street (at Valencia)

[UPDATE: A reader informs us of the following: "Thai Idea, the restaurant that occupied a space at Mission & Valencia that undergoes near constant turnover, is no longer there. Although many of the staff and menu items remained, the location is now called "Sweet Thai Basil". You can still order a lot of the faux-meat items, but they also offer actual meat products, so "everything else from the "Lamb" Curry to the Volcanic "Beef" to the Avocado "Shrimp" is within your dietary restrictions" is not true anymore. I don't really know anything about the Polk St location, so maybe that one remains unchanged.]

Source
It's less the "multi-dimensional dining experience" that their marketing promises and more a bare-bones restaurant where you can get an above-average veggie burger, decent fries with delicious dipping sauces like tahini, Asian plum peanut, and their Gilroy garlic veganaise. Also, they make a decent brick-oven pizza, all of which can be made vegan, and their non-alcoholic "vibrational, multi-dimensional elixirs" are quite tasty too, if you can get over the names.
11 Division (at King)

The Bud Bundy at Ike's

This Sunday, August 25th local breasts will break free of their lacy shackles and fight back against an unjust patriarchy that denies everyone an equal right to public nipple exposure. It is National