In early 2004 then-mayor Gavin Newsom, still-sorta-mayor Willie Brown and mayor of your laptop Steve Jobs opened the flagship Apple Store on Stockton Street. The press release reads like something announcing the arrival of a restaurant from a new celebrity chef. (14-seat Genius Bar! 39-seat state-of-the-art theatre! Internet cafe!) Photographer Gary Allen, who covers Apple retail on his site, reveals more about the greatest gathering of minds since the Yalta Conference:

I should note that Gavin was mayor at the time, but that Willie showed up, too. Before he left office, he had apparently negotiated a deal with Apple to locate the store at that corner, to help revitalize the south of Market area, and was celebrating the accomplishment. Interestingly, that appears to be happening again with mayor Lee and the proposed Union Square Apple store.

The backroom deal Allen refers to had to do with the historic status of the site Apple bought at 1 Stockton Street. Apple's iconic glass-and-steel design obviously wouldn't fit in with the city's historic preservation restrictions. But as Brown bragged to his audience of Chronicle readers after Jobs' death in 2011, he was pretty good at massaging those:

"You know, Steve," I told him, "no one says you have to preserve the entire building."

"How in the hell am I going to keep a part of the building and still put in my design?" he asked.

"Easy. Just promise to preserve a significant part of the building."

"And what significant part would that be?"

"How about the back wall?" I said.

It was a stretch for sure, but that's how we got the Apple store in San Francisco. One with a very historic back wall, I might add.

Roughly a decade later and a plan to move the flagship Apple store to the North side of Union Square is once again running into preservation roadblocks: The company is hoping to move the historic Ruth Asawa fountain, which doesn't quite fit with their industrial design.

One more shot, in case it was unclear who was in charge back in 2004: 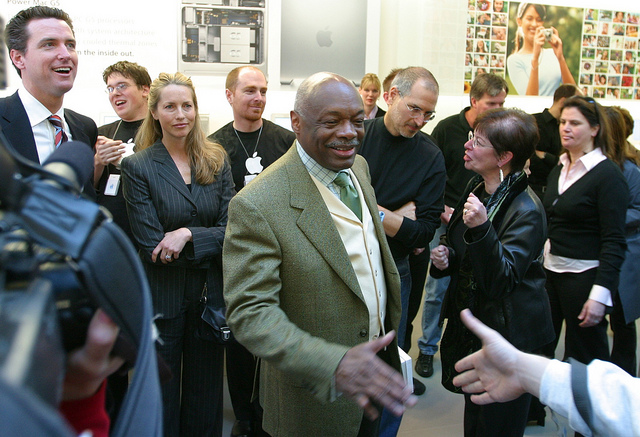 A group of young girls, christened by the media as the "Rainbow Girls," have been robbing high-end stores at the Westfield Centre and in Union Square. Also, they're totally lame and nothing compared

( By Angela Zimmerman) Consider this challenge: This past weekend, 20 filmmakers and 20 bands set out on a mad-dash throughout San Francisco and beyond to create music videos for Music Video Race. They