Although he is no longer with his circus troupe, a reader believes he spotted the now-notorious Yeiner Perez (or someone bearing an uncanny resemblance to him) performing clothed, masked and on stilts along the Embarcadero this afternoon. As of today, the San Francisco District Attorney's office was still deciding whether to press charges for the May incident.

Reader Chris sends in the below video, shot at the foot of Washington Street about a block north of the Ferry Building and just a short walk from the Embarcadero BART station this afternoon:

As we (and commenters) pointed out earlier today, Perez has been active on Facebook in the month since the incident at 16th Street, showing up to perform at Carnaval and around town. (Speaking of which: How has this guy not shown up in his own news feed yet? Baffling.)

While we can't 100% for-sure identify this guy is Perez: the stilts, the Berimbau bowed instrument and the mask all make an appearance in Perez's Facebook photos. Like this one from May 29th: 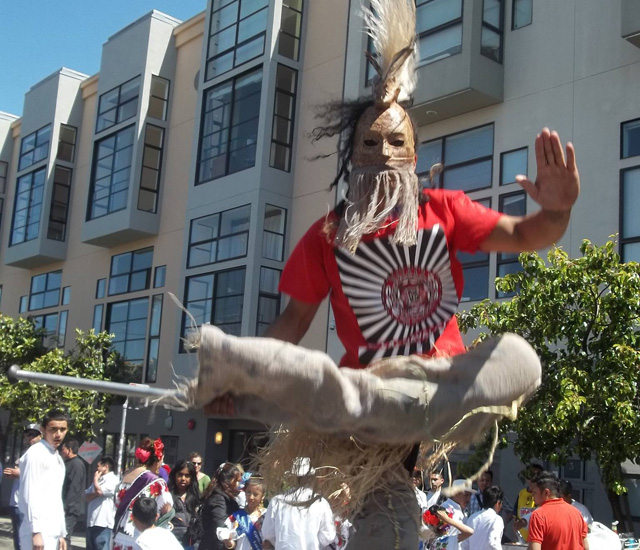 Meanwhile, Gawker has a few other photos sent in by people also thinking they've the same tipster who spotted the infamous sexual assaulter, meaning his Internet infamy is hitting its peak right about now. He was originally booked on suspicion of misdemeanor battery and held for 48 hours after the May 10th incident because the DA's office hadn't decided whether to charge him and they are apparently still looking for more witnesses. (Which is everyone on the Internet at this point.) With the Embarcadero BART station mere blocks away, it should only take BART police about seven minutes to show up, should they decide to haul him in.

Meet Raisin. He is a chihuahua who enjoys a good game of billiards. Despite the fact that he does not use a cue, and he scratches by sinking the 8-ball too soon, he