If you've ever been to the Blue Bottle cafe on top of SFMOMA, you've seen Caitlin Freeman's creative confections, which take modern art as inspiration for cakes, drinks and various sugary treats. Now, Freeman and friends have a cookbook out called Modern Art Desserts, which features a bevy of complex recipes and showcases the daunting Mondrian Cake on its cover. 'Who would and could make this cake?', I asked myself in the mirror. Insane people? Professional pastry chefs? Shut-ins and socialphobes? Ordinary folks who long for a bit of edible art on their table, just to make life worth living? Game on, I said to no one in particular. Let's find out just how a home cook would fare with Freeman's ultimate recipe.

First off, I should say that I've never made a cake. Why bother, when fruit-filled pies and cobblers are much easier? Perusing the recipe, I noticed the first red flag for a home cook: specialty equipment. The recipe requires a 16 x 4 x 4 Pullman pan, which is a long narrow pan roughly the size and shape of a San Francisco railroad apartment. Your typical cookware store probably won't sell it, because normal people don't need to make loaves of bread or cakes as long as a middle schooler's arm. I finally found the pan at Economy Restaurant Fixtures, a restaurant supply warehouse that's heaven for armchair chefs like me.

Next up, grocery shopping. You need to tally the ingredients for the chocolate ganache and multiply the given cake recipe by five, which leaves you with two dozen eggs, 60 tablespoons of butter (!), and 12 cups of cake flour, among other things. Luckily, there's only one thing I spend money on: food. Trips to Trader Joe's, Whole Foods and my local corner store (for McCormick's food coloring) yielded two heavy bags of cardiologist-disapproved ingredients, and I was ready to begin. 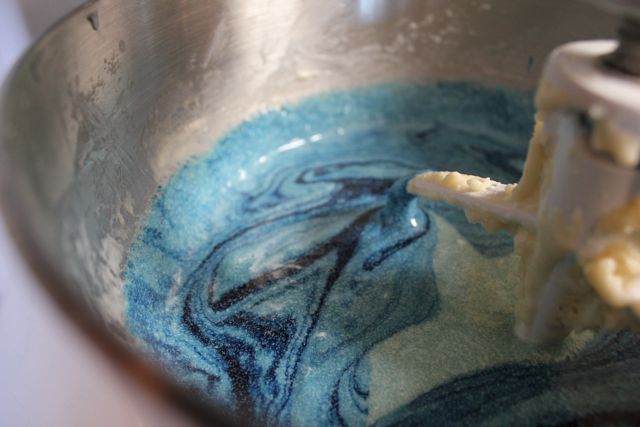 Ever wonder how they make this cake, exactly? Me too. Turns out to create the white- and primary-colored grid, you have to bake four separate cakes, then splice them together á la Dr. Frankenstein. This would be a whole lot easier if I had multiple pans, but buying the one was been hard enough (I justified by pretending like I'd use it again to make bread for tea sandwiches at a garden party I'd never have). So, I made each cake one after the other, which required about one hour of actual activity, punctuated by about five hours of concentrated television-watching while my red, yellow, blue and white cakes baked. 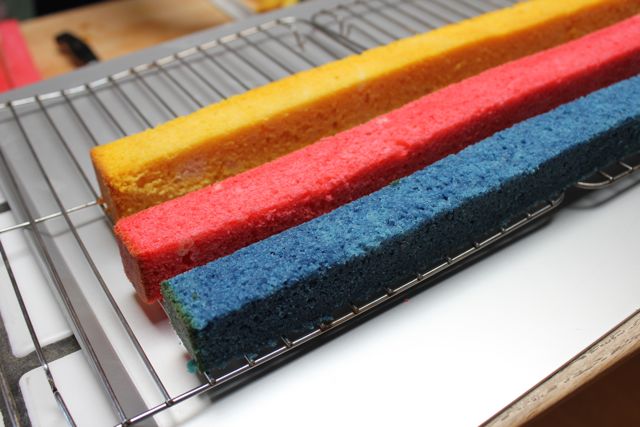 Adding the food coloring was the definite highlight of this process, for which you'll need a stand mixer and, as I mentioned earlier, an obscene amount of butter. There's just something thrilling about watching artificial coloring marble into your batter and turn everything it touches a bold unnatural hue.

Finally, at the end of day one, I had four enormous logs of cake that I wrapped and stuck in the fridge, per Freeman's instructions. I was beginning to see why slices of this cake cost $8 each.

The next day, the real work began as I revisited my high school battle with 90 degree angles. At this point in the process, you need a sharp knife and a ruler to measure and cut the cakes into geometrically accurate dimensions. This was the only part of the entire recipe that required actual skill instead of mulish patience. It turns out that you only really need a measly inch-square strip for the three colored cakes, which leaves hefty leftovers that Freeman advises you freeze for next time (my tiny freezer is still laughing about this one). I recommend foisting these neon cake bits onto neighbors or friends. Luckily they taste really good. 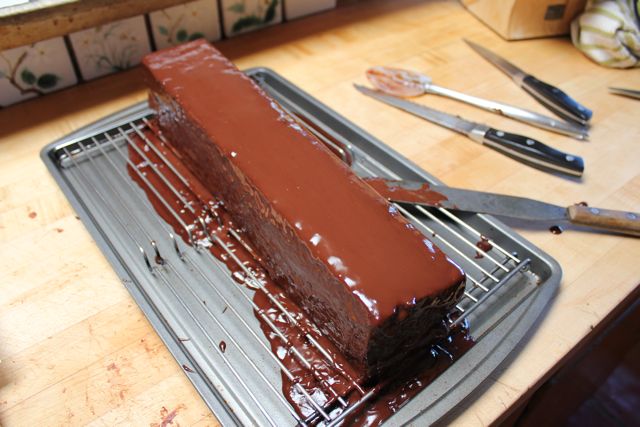 
Once everything was sliced, I poured the chocolate ganache over the slices and began the harrowing cake assembly process, which resembles a 3-D game of Tetris with oozing chocolate everywhere. Luckily, I had a pair of helping hands (thanks Mom!), which proved essential. After the different pieces were smooshed together per Freeman's instructions (see page 87, "Smooshing Helps"), I wrapped the log (which at this point weighed about 10 lbs.), massaged it to vaguely rectangular dimensions, and stuck it in the fridge.

Two hours of Mad Men catchup later, "Log" (as I now called it) was ready to be "enrobed" in chocolate. Freeman instructs you to sieve the chocolate ganache you used for the cake strips to regain a smooth consistency, but I dispensed with this step. After almost two days of work, I was ready to get this cake done and into my mouth. The result of my impatience was a slightly lumpy chocolate exterior which I was completely at peace with. 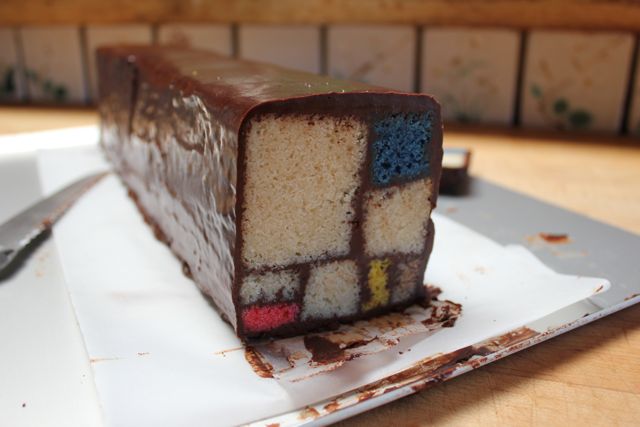 Believe it or not, the multiple layers of ganache necessitated four more hours of log-in-fridge action ahead, so I made myself comfortable with some excess cake bits and started to get excited about the big reveal. I wouldn't know if the results of a whole weekend's work would turn out to be a disaster or a success until I sliced Log and saw for myself.

And finally, as the long second day journeyed into night, it was time. 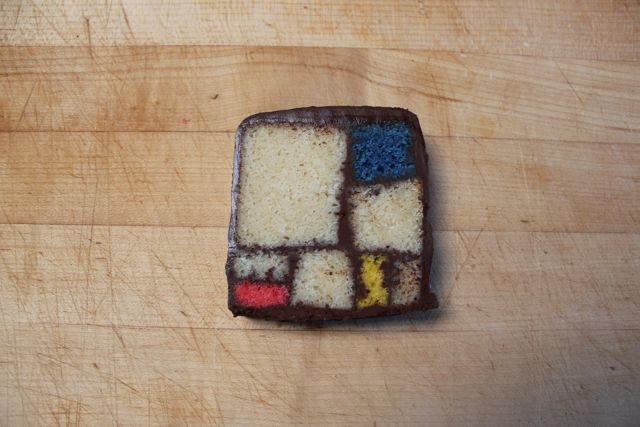 I couldn't believe it. The Mondrian Cake actually turned out okay! It was by no means as neat and orderly as SFMOMA's offering, but the proof was in the pudding: my cake presented a clear grid with Mondrian's telltale primary colored accents. I was a baking genius! Freeman's recipe is legit.

Sure, it took all weekend (no exaggeration). Yes, it is not healthy, nor is it cheap. Would I make it again? Only if I had a small army of worshipful assistants. But this cake gave me great satisfaction. I'd worked hard on a goal, and I had something tangible (and edible) to show for my efforts. I'd successfully avoided leaving the house all weekend. I had a new appreciation for Freeman and her fancy-pants art desserts, and I had an industrial-sized cake to call my own. Bon apétit. 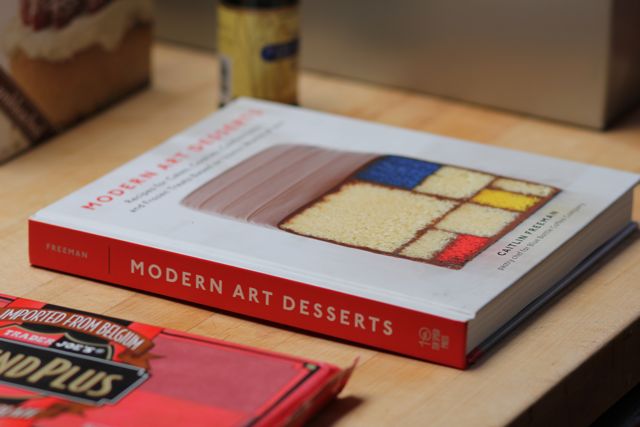 Special thanks to Adrienne Brennan for the use of her magical mystery spatula.

If all you ate was pizza and all you drank was Tecate all weekend, between the sunny Sunday and extra-sunny Bay to Breakers, you might be in the mood for something a little

The New York Times is good at reminding us about everything we're not. We're not especially fashion conscious by comparison, we're not preoccupied by Ivy League admissions (thank god), and we're certainly not

—
We Tried To Make SFMOMA's Mondrian Cake, And This Is What Happened
Share this