It looks like we've found an early winner of BART's new banning policy: This afternoon a man was reportedly see roving naked through the 16th Street BART "spitting and pissing."

Marc Huestis, who documented the acrobatics and water sports in the photo below, claims the station was shut down, although we couldn't immediately confirm that with BART PD. There was, however, a service advisory saying there would be 15-minute delays at the 24th Street station on the Daly City line one stop down.

We will, of course, update you if/when we know more. [See updates below.] Until then, you just keep being you, San Francisco. 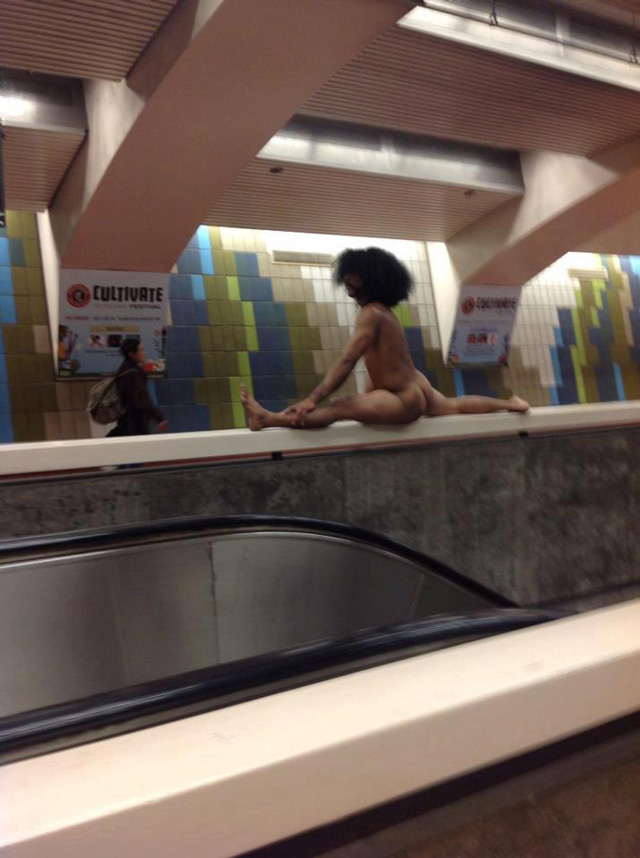 Update: Several other sources are reporting the nude man is actually on the tracks, possibly in the tunnel between the 16th and 24th Street Stations, which is causing delays in both directions. A BART service advisor confirms the delays are because of "police activity."

It is my empirical belief that @sfbart is delayed only when I ride it. #manontracks

Some asshole decides to run through the #bart tunnel between 16th and 24th street. Delays for all of us. #sfbart

Update II: Reader Bianca writes in to Mission Mission with an eyewitness account of the scene, which she says was not as "amusing" as it looks in the photo:


Just left 16 and Mission Bart station and as I was approching the ticket exit, a completely naked man with his penis hard was backing a woman coming from work I assume against a wall and he threw her down to the ground. Someone tried to stop him and he ended up throwing the guy to the ground and then got on the ticket exit/entrance thing and squatted over for everyone to see his anus

Bianca goes on to say she assumes the man was on drugs (unconfirmed at this point, obviously) and "thank god my kids weren't with me."

Update 6 p.m.: Bay City News has clarified the situation further. Apparently 16th Street BART was even more chaotic than we thought this evening and there were two incidents around the same time. The naked man, who will probably be accused of sexual assault, was detained by police in the 16th Street station without causing much impact on service.

Around the same time, just before 5 p.m. Police also received reports of two other people going into the tunnel between 16th and 24th Streets. Trains were delayed and one person (presumably clothed, although who even knows anymore) was found. According to reports, there was no second person in the tunnels.

As an aside: Facebook apparently deleted the buttocks-heavy post that our friends at the Bold Italic posted on Facebook late Friday afternoon. (And anyone who shared it, for that matter.) Luckily, SFist has not such qualms about butts and the photo can still be seen here.

Can't a network call a guy first? W. Kamau Bell, it seems, was in the running for the Late Night after Jimmy Fallon leaves the show to take over The Tonight Show from