As Lyft enters its second year of pink-moustachio'd gypsy cabbing, it stands to reason that some of the drivers are looking to distinguish themselves. Also, this is San Francisco, and we love a good art car. Behold...

Courtesy of Joe Starkey at Thrillist today, we bring you the Ghostbusters Lyft (above), owned by driver Jon, who says he went the Ghostbusters route after first considering making his weirdly shaped car into "a [Star Trek] Federation shuttlecraft," but then decided he might rather "get laid sometime in the near future."

Also, they highlight the Disco Lyft, from driver Matthew, who apparently is able to ferry people to their destinations without incident despite having a fog machine and crazy neon lights in the car.

And below, the Hello Kitty Lyft, from driver Winnie, which is just, well... precious. 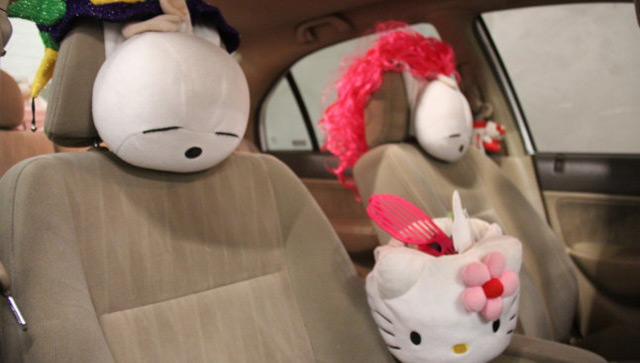 Previously: Letter To The Editor: Lyft Responds To Ride-Sharing Criticism

Good news for theater fans, and South Park fans, and fans of all things funny and awesome. The Book of Mormon is returning to S.F., this time to the Orpheum Theater, for

—
Behold, A Ghostbusters-Themed Lyft Car; Also, A Hello Kitty One
Share this