Two people were killed Saturday morning when their 1996 Ferrari 355 GTS drifted off of Highway 1, swerved back across both lanes and hit a tree in a wooded section of the Sonoma coastal road. The red Ferrari burst into flames, sparking a brushfire north of Salt Point State Park.

The crash occurred around 11 a.m. Saturday morning and closed Highway 1 for six hours while CalTrans patched potholes in the roadway created when the fired melted the asphalt. CHP officials have not yet estimated how fast the exotic sports car was traveling, but judging by the skid patterns, it had drifted off the right side of the road where it gradually turns left, overcompensated and then "shot back across the south- and northbound lanes" where the vehicle crashed into an embankment and a tree.

Both the driver and the passenger were pronounced dead at the scene. Their identities have not been confirmed, pending a dental record lookup. 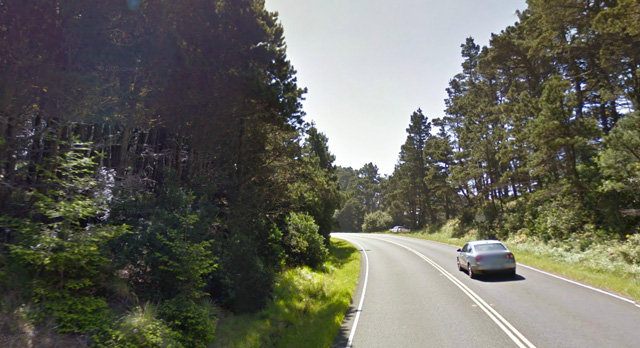 Near the scene of the accident, about four miles South of Stewarts Point, just north of Kruse Ranch Road. (Google Street View)