A little girl and Yosemite Junior Ranger named Evie apparently remorseful after removing a pair of sticks from one of the country's most iconic national parks.

Park rules, as any Junior Ranger worth their badge would know, forbid removing items from the park. Apparently overcome with guilt at betraying her rangerly duties, Evie wrote a letter of apology explaining her adorable lapse in judgement and mailed the two sticks back to the real rangers on duty at the park, asking them to "please put them in nature." One appreciative park ranger posted the letter on Reddit, much to the delight of cynical grownups everywhere.

Now Redditor/Ranger bestmattever says he plans to photograph the sticks in various places around the park and ask Evie where she'd like them placed. As for the haters who doubt Evie's very existence, Matt says, "Come visit Yosemite and see it for yourself! We rangers have more to do with our time than make up fake letters." 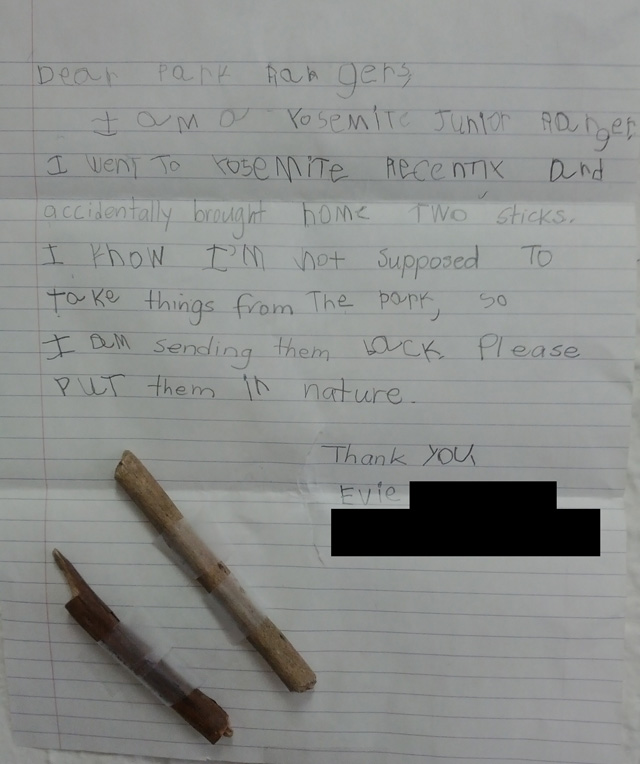 Oh YES, kids. E! is going all "Hey Paula" on Ryan Lochte, and it is going to be AMAZING. Well, maybe not. It could be incredibly boring. Watching dumb people say dumb stuff

Armed with many scare quotes, some merchants and neighbors in Hayes are none too pleased about the possibility of East Coast-based shirtmaker Gant taking over the former Into Video space at 552 Hayes

—
Little Girl Takes Sticks From Yosemite National Park, Mails Them Back Along With Adorable Letter Of Apology
Share this