Here we go, football fans. It's less than 30 minutes until kickoff in the Superdome, where as you know the San Francisco 49ers are ready to take on the Baltimore Ravens in the XVLII'th Super Bowl and — even more exciting — the very first #HarBowl. The Vegas line has the country's preferred team favored by 4.5 points, America's queen Beyonce is doing the halftime show and if CBS announcer Jim Nantz starts to get on your nerves, you can always put him on mute and follow along on our liveblog right here.

[Full Disclosure: We are, as you might have noticed, a weblog based in San Francisco. Expect appropriate bias. All times posted in Pacific Time. Refresh often for best results.]

3:15 p.m. Your NFC Champion 49ers came out to the field to the tune of Dre and Tupac's "California Love," which is about getting out of jail.

3:25 p.m. We're not even at the coin toss yet, but can we talk about a couple fashion items? 1) Jennifer Hudson's outfit: YES. 2) Alicia Keys in general: YES. 3) Colin Kaepernick's eyelashes: IMPOSSIBLY LONG.

3:30 p.m. Baltimore wins the coin toss because they have an black magic mascot. They called heads and deferred their decision to the second half. The tension is already palpable! San Francisco will receive at whichever end they feel like — it doesn't actually matter because this game is played inside a giant Mercedes showroom.

3:40 p.m. It took Jim Nantz less than 8 seconds of game clock to mention the pistol offense. First play of the game is coming back, which does not bode well for the Niners. On the other hand — isn't Referee Jerome Boger's accent just delightful? Niners were unable to convert on 3rd and 15, Andy Lee's punt is returned to the 50 yard line. Fairweather hearts sink along Mission Street.

3:45 p.m. Flacco's first down pass to Smith puts Baltimore in the red zone early on. Niners held on for two downs before a Third-and-four pass finds Antwon Boldin in the end zone. Extra point is clean. 7-0 Ravens just under five minutes into the first quarter. Niners fans find solace in statistics: this is the fifth consecutive game they've played in which their opponent scored first:

This is fifth consecutive game for 49ers in which opponent scored first. BAL joins ATL, GB, AZ and SEA.

3:55 p.m. On the next drive, the 49ers' running game sputters to life when Frank Gore takes five runs to pick up his first 10 yards. Kaepernick and Gore will go back and forth before Kaep finds Vernon Davis downfield for a 24 yard pass. Niners go to third-and-goal from the eight after an incomplete TD pass. Paul Kruger sacks Kaepernick 10 yards back and will probably haunt Kaep's dreams for weeks. 36-yard field goal from David Akers is good. 7-3 Ravens with four minutes left in the first quarter.

4 p.m. Fun fact about Super Bowl referee Jerome Boger. He's only the second African American referee to ever officiate the Super Bowl and when he's not on the field he also works as an insurance underwriter for Allstate in Atlanta.

Back in the action: the Niners hold the Ravens to third-and-seven. Flacco scrambles on the blitz and manages to find Boldin on a lob for a 44 yard gain. Flacco lets another pass fly to bring up third-and-13, ending in an embarrassingly slow-motion Flacco Sack-o. We'll switch sides and Ravens will punt to lead off the second quarter.

4:15 p.m. As the Niners march down the field, running the ball right into Ray Lewis' murderous face, we're hearing the first reports of semi-automatic gunfire in the Mission, about half an hour ago. Yeesh:

@eviloars Heard it. Around 23rd & Folsom. Not fireworks. About an 8 shot burst.

The Niners' drive ends after gaining 55 yards, when LaMichael James fumbles on the Baltimore 25.

4:35 p.m. The Niners offense returns to the field so Kaepernick can HAND THEM THE BALL BACK on a screwy pass intended for Randy Moss. Ed Reed gets the pickle and Baltimore is back in scoring range with less than four minutes in the half. Ravens have scored on 100% of their last ten trips to the red zone, but can't convert on third down. They'll fake the field goal, with J. Tucker scrambling on his tippy-toes until he's pushed out by Darcel McBath. Disaster averted. Niners will set up on the six yard line with three minutes left in the half.

4:45 p.m. Just kidding. The Niners go nowhere in three downs. Lee's 55-yard punt puts Baltimore at midfield with two minutes on the clock and they'll have the chance to receive after Beyonce sashays off the field. SFist 49ers Correspondent Daisy Barringer says the vibe in the Superdome is super weird:

Stadium vibe is weird. People are quiet and I've been asked to sit down. Whatever though. I'm being loud as fuck on D. NINERS!!!!

Commercial sidenote: how about those old people eating Taco Bell fourth meal while they play Fun. in Spanish?

Third-and-ten from midfield: Flacco finds Jacoby Jones on a lob to the ten yard line. Jones goes down, but there's no one there to down the ball and Jones runs the rest of the way in. Point after makes it 21-3 Baltimore. That's only the second 50+ yard TD pass the Niners have allowed all year. Kaepernick will have about a minute and a half to get something working. those who are just tuning in for the halftime show have about a minute and a half of game clock to practice your Beyonce moves again. Harbaugh is warming up his vocal cords:

5 p.m. The Niners burned through their remaining two timeouts on the eight yard line before going emptyhanded for three downs. Akers ends the half with a successful field goal. The score is 21-6 going into the Pepsi Beyonce Extravaganza Half Time Show (or whatever it's called). We predict sales of Fernet shots at local drinking establishments will skyrocket as everyone drinks for second-half fortitude.

5:40 p.m. Is this a Candlestick Curse? The power is apparently out at the Super Dome. Jim Nantz goes silent and CBS cuts to commercial. Twitter is also experiencing some technical difficulties — probably from everyone wondering what just happened.

Sideline reporter Steve Tasker says about half the power in the stadium is out, including the press box and the scoreboard. There's reportedly no danger, but we'll have a game delay. Daisy brings us a photo: 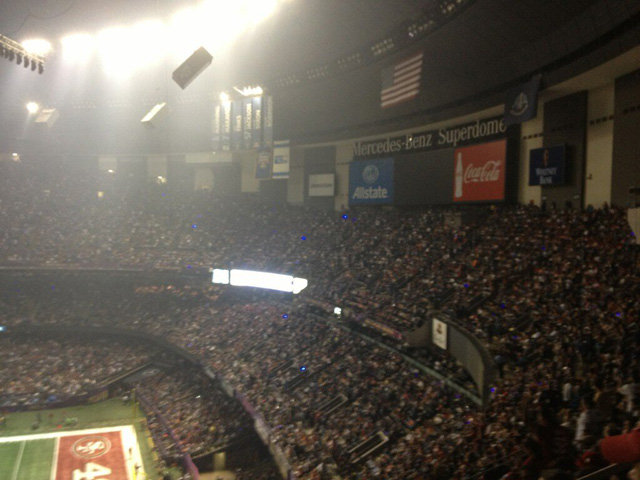 SFist Editor Brock Keeling has some words of disappointment:

Coach Eric Taylor would have played in the parking lot, pitch dark, with a full heart, goddamnit. #lightsout

This could be awhile, you should probably take a look back at some photos of Beyonce.

6:15 p.m. Aaaaand, we're back. Jim Nantz blamed the outage on Phil Simms plugging in his cellphone. Ha! Good one, Jim!

6:20 p.m. Two punty drives later, the Niners have the ball back somewhere just short of midfield with less than 10 minutes in the third. Crabtree goes long in the slot, but couldn't come down with it. Beer cans are crushed in frustration. Someone somewhere yells, "BUTTERFINGERS."

6:25 p.m. Crabtree redeems himself on a 31-yard touchdown catch with a run after. The Niners have finally put one in the endzone more than halfway through the third quarter. Score: 28-13.

6:30 p.m. No one remembers what Ahmad Brooks said earlier this week as he sacks Joe Flacco for a loss on third-and-ten in Baltimore territory. A sloppy punt and a 32-yard return puts the Niners on the 20. Frank Gore runs right out of the shotgun for a six-yard touchdown run. Niners are now within striking distance of a comeback with five minutes left in the third quarter. Score: 28-20 Baltimore.

6:40 p.m. FUMBLEROOSKI: Baltimore! Ray Rice dropped the ball two yards into the drive on a hit from Tarell Brown. Brown recovers to set up the Niners on the Baltimore 21. The blackout apparently shook up the Ravens. Subsequent 49ers drive sets up 39-yard field goal attempt, which David Akers MISSES, getting roughed up in the process. Flag on the play makes it a 34-yard attempt, which Akers lines up nicely. Although we're not exactly hoping the game comes down to his leg at this point. Score: 28-23 Baltimore.

6:50 p.m. Ravens end the third quarter with a five-point lead and th eball on San Francisco's 18 yard line. Back from the break, the Niners chase Flacco as he pirouettes his way out of bounds on a third down. Ravens field goal makes it 31-23 Baltimore with 13 minutes left to play.

7:05 p.m. Kaepernick's 32-yard pass to Randy Moss and Frank Gore's 21-yard run set up the quarterback for a 15-yard TD run. (Longest QB run in Super Bowl history.) Niners go for the two-point conversion, but Kaep's pass is incomplete, shook up by a blitz. Score: 29-31 Baltimore with 10 minutes of play left. And we have confirmed Kapernicking:

Jim Nantz keeps reminding us that this could all come down to Dave Akers because Jim Nantz is a total asshole right now.

7:20 p.m. Baltimore goes 10 plays, 59 yards and burns 5:38 of clock to put up another field goal. Score: 34-29 Baltimore with 4:19 left in the game. Our pals at DCist bring us a moment of levity as legendary 'Skins QB Joe Theismann gives his review of Beyonce's performance:

Beyonce shit the house down

7:35 p.m. 75 yards over six plays and the Niners come back from the 2-minute warning on the five yard line. Third and goal on the five and the Harbaugh barely avoids a delay of game by calling a time out. Fourth and goal on the five, Kaepernick gets rid of it quick and it's way over Crabtree's head. Harbaugh is calling for holding, but there are no flags. San Francisco has one timeout and Baltimore backed up to their endzone.

Here's that controversial no-call play. Was this holding? (via: Bleacher Report)

7:40 p.m. The Ravens showing punt with 12 seconds left. Punter holds it to go for the safety and burn eight more seconds off the clock and preventing a punt return. All of San Francisco wants to punch Baltimore kicker Sam Koch right now. (Note: please don't punch anyone.)

7:45 p.m. Koch comes back out to put the nail in the coffin: kicks to Ted Ginn who makes it to the 50 yard line but can't get out of bounds. That's a ballgame, folks. Baltimore Ravens win: 34-31 in a tough loss that saw the Niners unable to pull out another heartstopping comeback.

You know what can really turn a mood around? Adorable animals. These cats (and one dog named Billy Joel) are all hoping Kaepernick and co. can pull off something big in the second