SFPD Sergeant Carl T, formerly known as Sgt. Carl Tennenbaum, has posted a Facebook video of himself apparently blasting through the Broadway Tunnel in a Lamborghini at speeds he claims were up to 100 mph. In the comments on his Facebook post Carl T joked, "it's roomier than you'd think. Plus, we were all drunk." [Note: see update below]

According to the video's timestamp, it was shot (or art least posted to Facebook) on September 9th of this year. While we obviously can't verify Sgt. Carl's blood alcohol level at the time of his joyride through the 35 mph zone, the video garnered 31 likes on Facebook including comments from fellow SFPD officers. The comments ranged from jokey: "That's a lot of people sitting on laps" — referring to the 10 people tagged in the video. To ribbing: "Only 100?" To encouraging: "Used to do it regularly on the solos going home off the 1900-0300 watch," wrote one Officer Ben Mcalister, who has a history of disciplinary cases.

Even Captain Al Casciato, who received an "Above and Beyond" award from the department earlier this year, didn't go very far to discourage the thrill-seeking behavior. Instead Captain Casciato reminisced with other officers who used the comment thread to joke about the time one officer found a decapitated head of a motorcycle rider in the tunnel. If the comments are any indication, gory photos of that incident were passed around the department for a laugh: 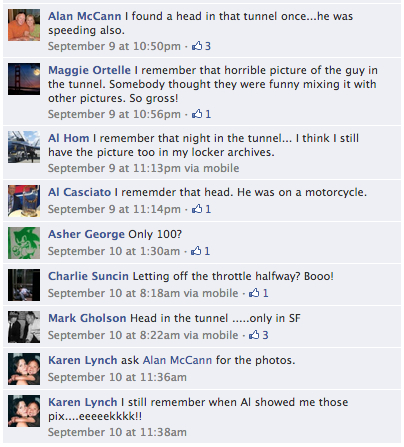 We should note that "Carl T" is the sergeant's legal name. He changed it from Carl Tennenbaum a few years back when he was told his name badge must display his full name, rather than his preferred nickname. Sgt. T is a San Francisco native who grew up in the Sunset and once joked to the Weekly, "I didn't get far in life at all." Prompting ace crime reporter Joe Eskenazi to write that the sergeant must have "found that his Denny's-like name tag fit his policing philosophy." Which sounds like a grand slam.

Update, 12 p.m.: Sgt. T's video, although originally shared publicly on Facebook appears to have been taken down. It also seems that Sgt. T has completely deleted his account. But the screenshots and video still stand for posterity.

Update, 4 p.m.: According to Officer Carlos Manfredi in SFPD's Media Relations department, the video originally posted to Facebook by Sgt. T is currently under administrative review by the Internal Affairs Department. Although Sgt. T could not immediately be reached for comment after the joyriding video disappeared from Facebook, one SFist commenter noted the car was likely doing about 74 mph in the 35 mph zone. Not 100, but still well within the realm of reckless driving.

As for who was actually behind the wheel, Sgt. T told SFWeekly this afternoon that he was the third person sandwiched into the two-seater Lamborghini rented by a friend and his drunk driving comment was a joke. Another friend was the cameraman in the passenger seat. Regardless of the driver, another SFist commenter notes they spotted a car matching the description doing some high-speed maneuvers in the area of the Central Station (where Sgt. T is stationed) around the same time period:


About 4-5 months ago, I saw a black Lambo driving on Stockton and around North Beach. I saw it 3-4 times and every time it was peeling out at stop signs/lights and basically driving as fast as possible given the traffic.

To his credit, Sgt. T was the same officer who talked down an assault suspect threatening suicide on the Embarcadero last week.

Police have made five arrests in connection with the case of a murdered man and injured woman who were found bound and gagged in Visitacion Valley on Sunday. According to the SF Appeal,

Bike Safety vs. Parking Spots: Fell & Oak bike lanes appealed. [Curbed] By the year 2015, you could have your burrito delivered to you via unmanned drone. [UptownAlmanac] Man drives 300 feet down

—
SFPD Sgt. Joyrides Through Broadway Tunnel at 100 MPH, Posts Video On Facebook: 'Plus We Were All Drunk' [Updates]
Share this