What are you doing at the office right now? Work? That seems ambitious. Everyone else in downtown San Francisco has crowded around their office windows and lined the sidewalks along Market Street and Civic Center Plaza, hoping to get a glimpse of Buster Posey's winning smile or Pablo Sandoval's orange mohawk. If you're one of the unlucky few without a line of sight to the parade, you're probably watching the livestream as the parade gets underway at 11 a.m. In the meantime, we'll be updating this post with all the photos, witty tweets, and other quotable highlights.

BART spokesman Jim Allison told KRON 4 this morning that an estimated 500,000 riders hit the transit system this morning. BART believes they're on track to break the ridership records set during the 2010 World Series Parade. In fact, so many people have come from Livermore and points beyond, that BART has been running express trains from Dublin/Pleasanton to Civic Center. Ticketing machines are starting to run out of cash, so if you need to buy a BART ticket today, best use your credit or debit card.

The morning rain may have stopped earlier, but the forecast is still calling for 1.5 tons of confetti to fall from the sky. At $10 per pound, according to the Chronicle's Matier & Ross, the stuff is actually more expensive than some cheeses available at the Ferry Building.

11:10 a.m.: The trolley cars are leading the procession down Market Street. This year, the faux-Cable Cars will carry members of the Giants front office, support staff and their family members. Following the cable cars, Kruk & Kuip rode atop an SFFD fire engine to get the crowd (ahem) fired up by blasting some ACDC:

Unlike in 2010, the Giants players will be riding in in their own convertibles (many of them driven by 49ers players.) Speaking of which, here's a photo of Brandon Belt who has been strapped up with a camera as he mounted his ride: 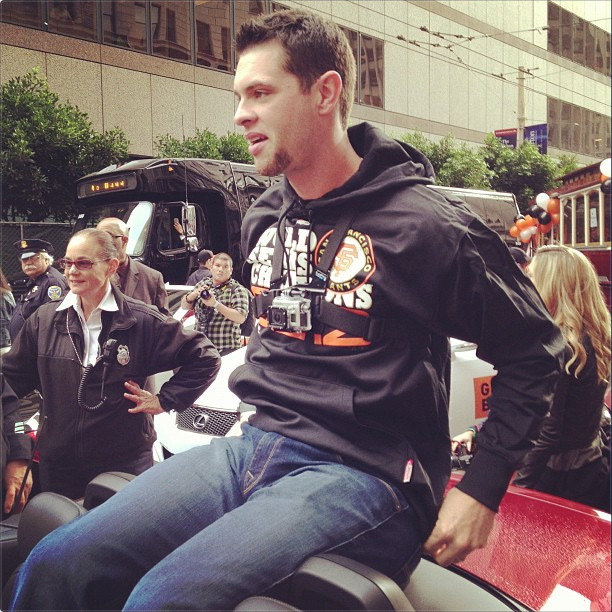 11:30 a.m. Here come the dignitaries. Mayor Ed Lee is waving and grinning like a big dork: 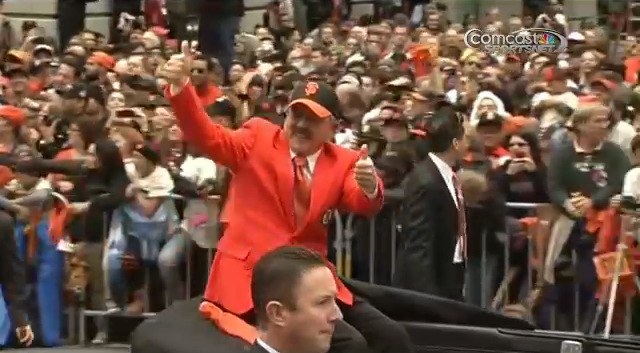 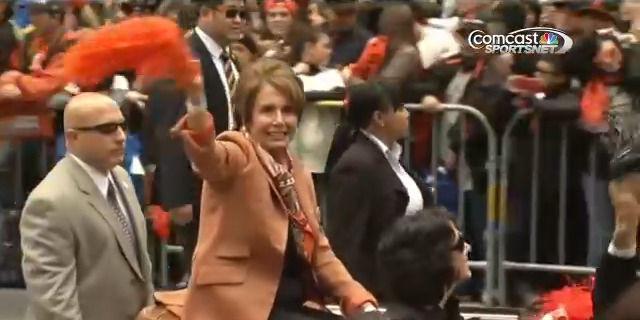 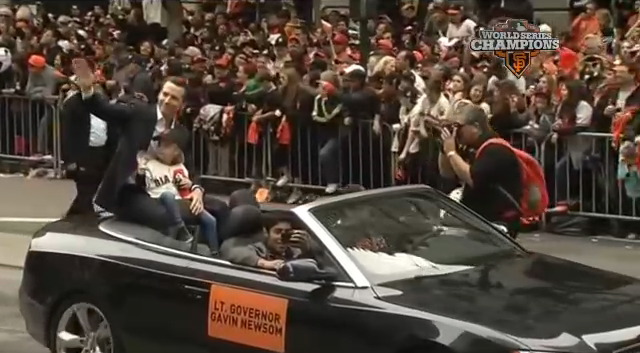 As he waits for his turn to enter the parade with this three World Series babies and his wife's magic ovaries, Jeremy Affeldt says the noise level on Market Street is "like game day times 100." Affeldt, you'll remember, struck out the middle of the Tigers' order in game 4 and every time his wife Larisa gives birth, his team wins the World Series.

Virgin America, known for their bearded airplane, brought along a zombie tiger with their corporate float: 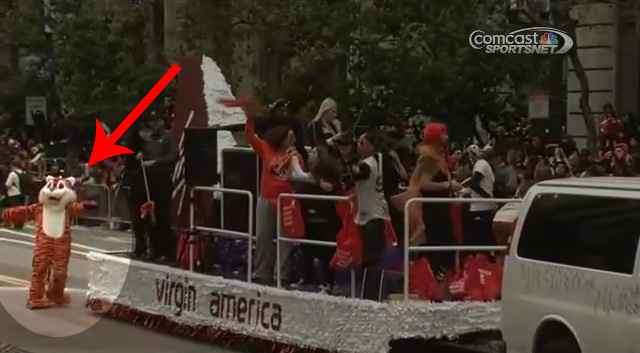 On the Comcast Sportsnet livestream, a reporter just spotted the best sign of the day. It read: "Dodgers Fans Are Working Today."

12:00 p.m. Here's Skipper Bruce Bochy, beaming as his makes his way down Market Street in a convertible Rolls-Royce with the Commissioner's Trophy high over his head: 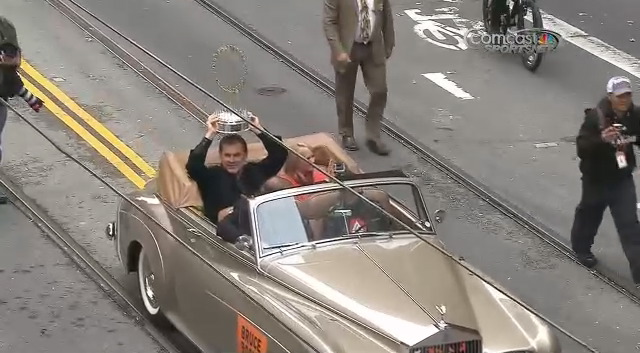 12:15 p.m.: As the players finally make their way down Market Street a freshly shorn Hunter Pence threw a shirt into the crowd, causing a chorus of high-pitched wails. Meanwhile, one convertible back, closer Sergio Romo is sporting an "I Just Look Illegal" t-shirt and some flashy white Oakleys.

In other sartorial notes: Brian Wilson is the only player to ride on the Cable Cars this year, and unlike Pence he is still refusing shave the Rasputin-looking thing off his face. Wilson is sporting a blue hoodie and his trademark purple fanny pack. Mayor Lee, on the other hand is looking flashy in that bright orange blazer. As he told CSN, he had to steal it from Willie Brown's closet.

Cutest fan award goes to Gregor Blanco Jr., who has been spending most of the parade hiding under his dad's arm as their ride floats down Market Street.

12:30 p.m. Sergio Romo has ditched his convertible and will take the rest of the parade on foot. Naturally, he's being trailed by a security detail and SFPD officers, which adds a nice hint of irony to his t-shirt: 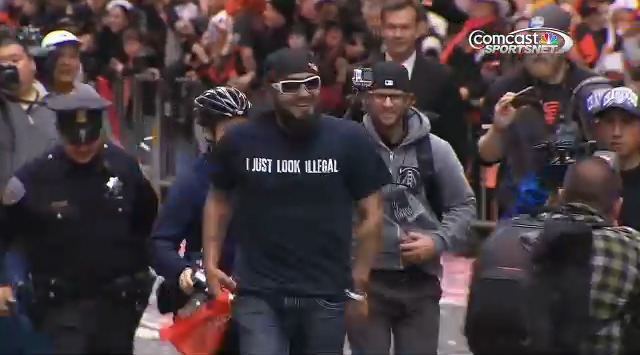 12:45 p.m. As the players start to pull into Civic Center, the convertibles have the unenviable task of finding parking downtown. Bruce Bochy's Rolls-Royce has apparently run out of gas and is now being pushed along McAllister Street to City Hall. 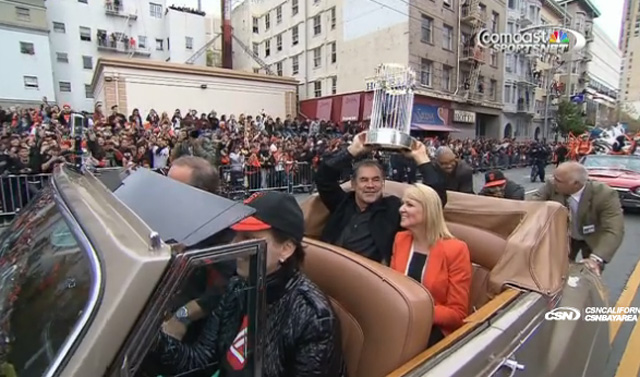 1 p.m. The second half of today's festivities will take place in front of City Hall just as soon as they can corral Romo, who is still wandering up and down McAllister Street on foot, up to the stage.

1:40 p.m. The stage show is finally underway. Unfortunately Beach Blanket Babylon's Tammy Nelson, who opened the show with a rendition of "San Francisco (Open Your Golden Gate)," made a major league error telling the crowd their "San Francisco 49ers swept the Detroit Tigers." To be fair, she recovered nicely and the crowd didn't even seem too violent. 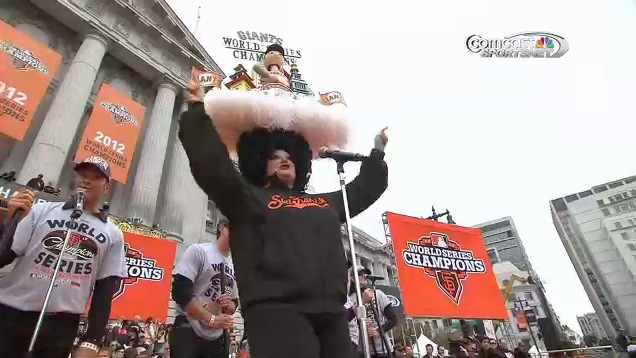 Before announcing the players on the steps of City Hall, KNBR announcer Jon Miller introduced himself and broadcast partner Dave Flemming with a mildly embarrassing rendition of Psy's viral hit "Gangnam Style." Many in the audience cheered. Others (like us) tried not to cringe too noticeably: 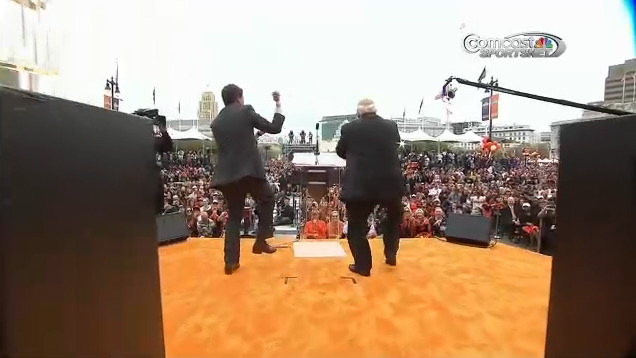 Back on the fashion tip: Tim Lincecum, presumably hiding some baked eyes behind those aviator sunglasses, brought his smart leather bag on stage with him. (Because he might need something in there?) Barry Zito, meanwhile, was carrying what looked to be an all-black JanSport.

After trying to make "Orange Dragon" a thing, Ed Lee presented Giants COO Larry Baer with a key to the city, followed by the first-ever "Broom to the City." It's gold: 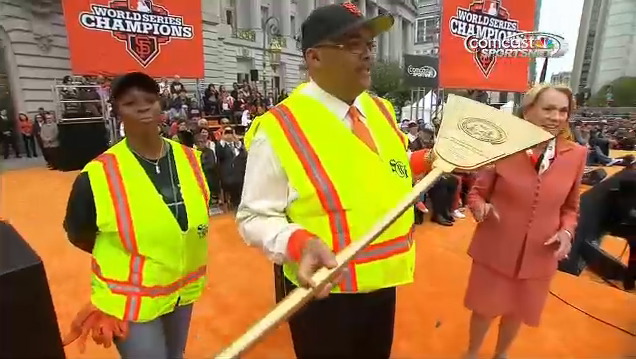 With Kruk and Kuip up on stage, the voices of KNBR are getting the crowd riled up. Krukow's inspirational speech even looked like it had Ryan Vogelsong all choked up: 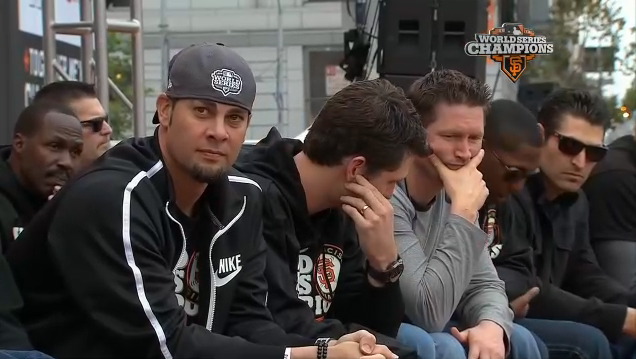 Vogelsong's own speech ended with a mysterious new rally cry, telling the crowd that they can figure it out. The pitcher exclaimed: "You're going to jail now!" before uppercutting the microphone and taking a seat. More on that when we decode it. [Update: Vogelsong's rally cry explained.]

2:45 p.m. Final team photo opp with Queen playing in the background and now it's time for a surprise visit by Tony Bennett to play us off with "I Left My Heart in San Francisco": 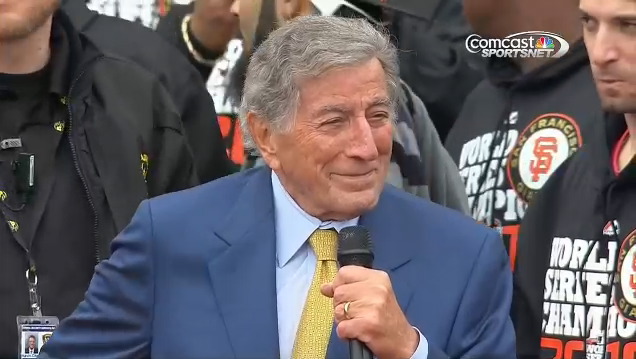 Police need your helping finding the horrible human being(s) who shot a dog during an armed robbery. See, a little after 9 p.m. Tuesday in the 1500 block of 41st Avenue,

This unruly Giants fan, spotted using the Giants World Series win as an excuse to act out every Muni commuters not-so-secret fantasy, was arrested Tuesday night around 7 p.m. in San Francisco.

—
Live: Photos and Updates From The Giants' Victory Parade
Share this