As you know, the Space Shuttle Endeavour will fly low and slow over the Bay Area bright and early tomorrow morning on the back of a modified Boeing 747 as NASA does a victory lap commemorating the end of the Space Shuttle Era. While many of you won't be able to make it down to Mountain View for the big celebration at NASA Ames, there will still be plenty of viewing opportunities where you can indulge your inner space nerd right here in the city before it becomes just another piece of metal in a museum in LA.

As we mentioned earlier this week: weather permitting, Endeavour will be heading North from Edwards Air Force Base bright and early tomorrow morning. Before hitting the Bay Area, the shuttle will do a flyby of the State Capitol in Sacramento and then turn back South towards San Francisco. She is expected to be in San Francisco around 8:30 9:30 a.m. at the earliest to arrive at Moffett Field between 9 and 9:30 10 and 10:30 a.m. Keep your eyes on the Golden Gate Bridge and the Eastern Waterfront over the Bay during that hour or hour-and-a-half. Update: NASA has pushed back takeoff one hour so Endeavour will reach San Francisco after the morning fog has lifted. Look for the shuttle to hit the Bay Area round 9:30 a.m.

Thanks to SFist pal Todd Lapin at Telstar Logistics, who is currently down at Edwards Air Force Base, we can confirm this rough map of the flight plan for tomorrow morning: 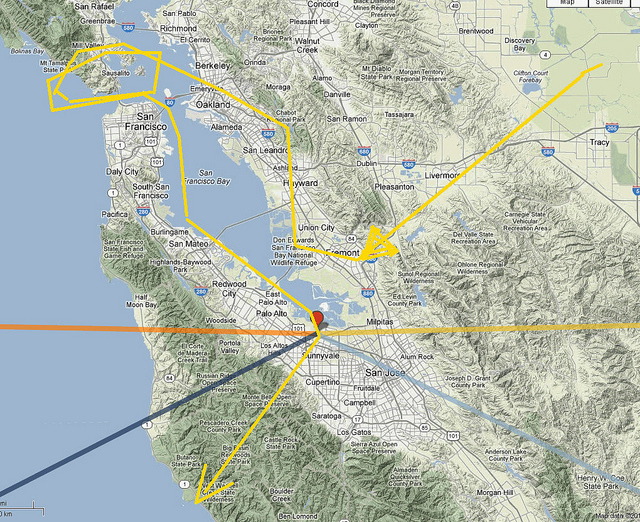 From the looks of things Crissy Field, the Exploratorium and Marina Green would all be a great place to see the shuttle fly low over the Golden Gate Bridge tomorrow. Those of you in office buildings along the Embarcadero or the Eastern part of SoMa should be able to catch a glimpse of Endeavour as she goes over the Bay Bridge and follows the water South towards Mountain View. Treasure Island would be great place to set up as well, if you can make it out there.

In the East Bay and in Marin: you guys will want to get into position on the earlier side when she follows 580 up and over the Bay before cutting Northwest towards Sausalito. Berkeleyside suggests the Lawrence Hall of Science, anywhere near the top of Claremont Canyon or Grizzly Peak, the Chabot Space Center, Skyline Drive and Cesar Chavez Park as great viewing areas. On the later side, expect the West Span of the Bay Bridge to get backed up as well, once everyone starts to rubberneck for a glimpse.

Because the big bird is scheduled to be back down in Los Angeles by 11 a.m., we don't expect any flybys later than 10 in the morning, but there's a slight chance of a 1-hour delay — Endeavour is now scheduled to return to LA by 1 p.m.

As always, if you get any great photos feel free to share them with us either by tweeting @SFist, tagging SFist on Instagram or adding them to our SFist Flickr pool.

Update, Friday September 21: Endeavour took off on time around 8:20 a.m. this morning. The local ABC affiliate is also passing around a different flight map, which you can see here, but we can't confirm it's accuracy at this point.

And if you're looking for post-flyover photos, you can find those right over here.

Forbes Magazine, a publication not often associated with the Bohemian set, has sifted through 250 neighborhoods in the biggest U.S. cities to determine once and for all which neighborhood reigns supreme as