The flaccid fratboys and aging sorority girls of the Marina have done it again. Not learning their lesson from in April of this year, San Francisco's most troublesome social strata layer trashed the Great Meadow at Fort Mason during yesterday's 4th of July revelry. It's disgusting. A very angry Golden Gate National Recreation Area had to use 55 employees ("from the highest paid to interns) to clean up a shocking amount of leftover garbage that included "raw meat, unopened packages of food, three barbecues (one that looked brand new), a couch, and a ad hoc bar made out of plywood."

Friend of SFist Zach Behrens reporting for KCET has more:

"Parks spokesperson Alexandra Picavet calls these offenders 'Trash Mobs.' 'Hundreds of people coming to places like Fort Mason Great Meadow with bags and bags of food and alcohol -- lots of alcohol, BBQ's, toys and sometimes furniture, and just leaving it there when they are done,' she said in an e-mail today. 'What is the National Park Service to do about this kind of abuse? How is this acceptable behavior?'

"Picavet said that law enforcement was patrolling the area and had made several contacts with people in the meadow, but it didn't stop the unexpected. She said there are no firm plans in place yet for future management of the meadow area, but discussions — conceptual at this point — include banning alcohol and changing hours. At the end of the day, it will come down to, as she asked, 'How do you combat behavior that is egregious as this?' "

Another image shows the trash that was left behind: 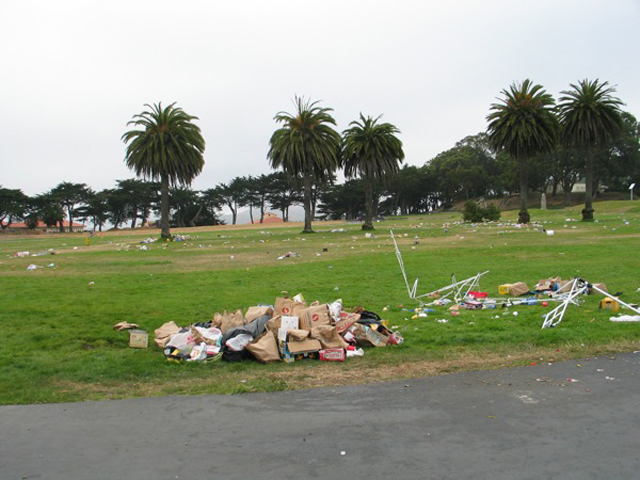 During the festivities on the north side of the city, Miriam Karpilow tweeted this photo followed with, "It's apparently Spring Break in the Marina." By comparison, Dolores Park's seams burst to the breaking point on most sunny weekends, but leftover waste doesn't seem to be a problem there. So why is it with Fort Mason? "Dolores almost never looks like that," Kevin Montgomery, editor/founder of Mission District-centric Uptown Almanac, explains to SFist. The last time the Marina used and abused the same public park, Fox Nation picked up a similar incident, using it to fabricate an entire story to blame green activists.

Our perpetually slick former Mayor celebrated yesterday's national holiday in classic American style: by watching the local parade with the wife and kids. Dressed to beat the heat in a white v-neck t-shirt

And now, for your summer viewing/eating enjoyment, the kids at Bacon Bacon food truck have something they're working on. They write, "A little research and development at HQ today. Why use bread