Yikes: a big tree fell down on Haight Street between Scott and Pierce early Monday evening, resulting in downed power and Muni lines. "Muni has been rerouted in the area, there may be delays," reports AlertSF. Please, at the very least, stay out of the area for the next few hours.

No word yet of any injuries. We'll update as soon as we know more.

Update: Haighteration, boasting a bevy of pics, notes that the flattened car in question was a "gray Ford pickup truck." The arboreal crash also resulted in shutting down traffic in both directions on Haight.

Update II: Dawson Ledwig, who snapped these bold images of the fallen beast, explains to SFist what happened as he and his wife heard the tree tumble down just outside his Haight Street apartment. He tells us: "My wife and I were in our bedroom which looks out onto Haight. We heard a crack, rushed over to the window and saw the tree falling slow motion-like onto a gray truck, crushing the back end. The most frightening thing was seeing the Muni lines come down. After that we investigated from the ground until the cops shooed us away. Then we watched from our apt, with the firemen, police, and muni wire-cutters doing their thing. The guy who owned the truck came by about 30 min. After the fall, he was surprisingly calm about the whole thing - clearly distraught, but under control. He did smoke a lot of cigarettes, though."

Another view shot by Ludwig: 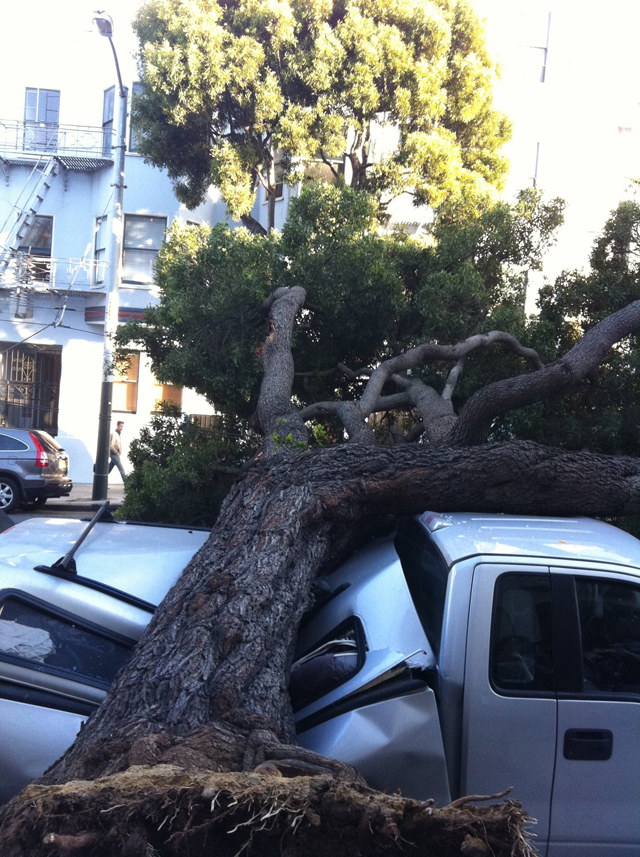 Chuck Nevius celebrates the other Golden Gate Bridge — the one in Mulvane, Kansas. [Nevius] The principal of the Paul Revere School in Bernal Heights is staring down DUI and Hit-Run charges today. [SFAppeal]

We just can't get enough of the glorious fireworks display that took place at the culmination of yesterday's Golden Gate Bridge 75th Anniversary festival. In addition to our collection of great videos documenting