Last Sunday, 20,000 lucky Giants at AT&T park went home with miniature keepsake versions of the Giants' celebrity closer. While the officially licensed tchotchke's are already fetching around 60 bucks on eBay, an army of cheap overseas knockoffs has already hit the grey market from a wholesaler located in Fairfield, California.

The gnockoffs (ugh, sorry) can be easily spotted because they lack any MLB or Giants trademarks. They do, however, feature a familiar-looking bearded fellow wearing an orange and black #38 "Wilson" jersey, with "San Francisco" emblazoned on his gnomish belly. Confusingly, the fake Wilson is showing off his signature game ending arms-crossed, thank-you-Jesus pose. Here's a side-by-side comparison, just for clarity's sake: 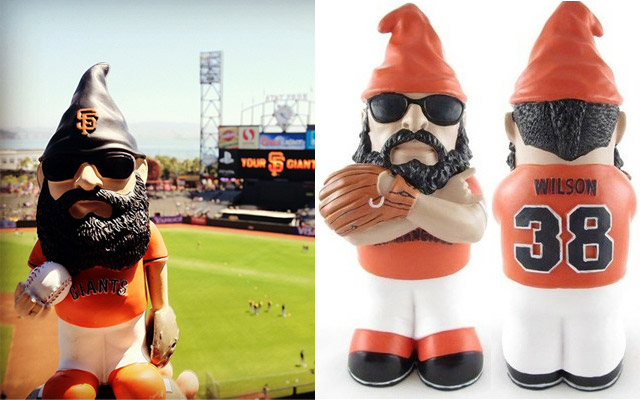 When asked about the giveaway on Sunday, Wilson himself said, "I don’t gnome what you’re talking about. He’s pretty tan but not really in shape. We wear the same hats, obviously. It’ll be pretty fun. Hopefully I can get one." And hopefully he won't have to resort to cheap imitations.

SFist reached out to the Giants front office this afternoon to get a comment on the counterfeit items, but have yet to hear back from the team. Anyhow, if you're looking for the ultra-rare Hagerstown Suns version, those can be had for a very reasonable ten bucks.

Update: The Giants emailed us back. Valerie McGuire, the team's Director of Special Events and the one responsible for coming up with the Brian Wilson gnome weighed in: “Gnome comment.” That'll do, folks... That'll do.

The Golden Gate Bridge makes a cameo in the 1955 It Came From Beneath The Sea. [Curbed] Stepped-on Del Taco box to replace Giant Value. [Uptown Almanac] Rich person hires rich person to

This was a spec ad/pitch for some sort of safe-sex organization in Sweden that was ultimately rejected. But it's such fun! Yay, condoms! [The Daily What via WOW]