Another day, another restaurant opens up in the city's whimsical Mission District. But wait! This one should be super keen, or so we're told. Chef Thomas McNaughton and chef de cuisine Michael Gaines' (sous chef at Manresa) new joint, Central Kitchen, has been described as an "upscale spinoff" of McNaughton's Flour + Water. Located at Florida and 20th Street, it promises to be gritty and quote the feast. And yet so much more. Each item is somewhere under the $30 range. Which? Is still very pricey, we get it. However, it costs money to make good (nay, great!) food.

Insofar as the menu goes, Eater notes: "Ingredients like goat’s whey, nettle ragu, and salted true cod are sure to draw the critic and industry types, while things like poached hen with young potatoes will please less adventurous diners." And as far as the menu's philosophy, Grub Street reports,"[T]he inspiration for the food is the ongoing evolution of Northern Californian cuisine, including contemporary restaurants at the forefront like Saison, Coi, and Manresa."

On the sweet side of things, Central Kitchen hired Lisa Lu, according to Inside Scoop, whose last gig was at Jardiniere. Michael Bauer describes her as "a masterful pastry chef who has the rare ability to bring everything together in an integrated dessert."

And with that, Central Kitchen will be the it restaurant until the next one opens up. Which should be any second now. Regardless, you should make a reservation as soon as you can. In the meantime, pore over the menu: 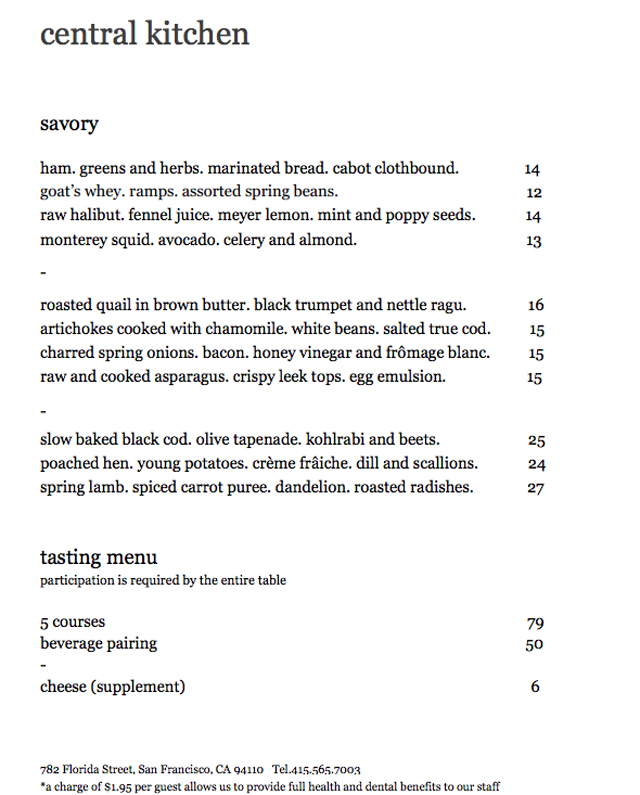 In an interview with ABC's Robin Roberts this afternoon, President Obama announced that he has "always been adamant that gay and lesbian Americans should be treated fairly and equally." After speaking with many