Justin Beck's live coverage of today's May Day occupation continues. Right now, at around 3 p.m., cops have arrived in Oakland near Broadway and 14th, demanded protesters to leave or face "removal by force if necessary." The standoff seems pretty intense, even thought there aren't of protesters in the area right now. Then again, this is Oakland. If past Occupy-ish action in Oakland has told us one thing, it's that anything can happen. Even snacks aren't safe.

Update: Look, OPD brought out a tank! Actually, it's a "personnel transport" that's supposed to protect authorities while being transported. But still, a daunting vehicle. Behold: 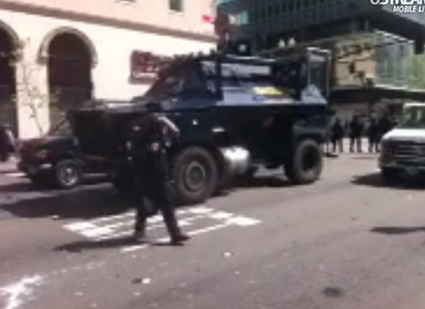