St. Joseph's Church, which has stood empty since suffering damage in the Loma Prieta quake a little over 22 years ago, is finally going to get put back to use as the market for office space in San Francisco returns to its dot-com-era frenzy. Developer Chris Foley of the Polaris Group bought the property three years ago, and with office space now at a premium, the process of retrofitting and restoring the building is now underway, with the hope of finding an edgy office tenant with a taste for ecclesiastical architecture by mid-2013. We're just a little sad it isn't becoming a nightclub. 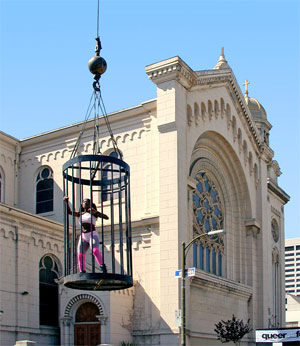 Apparently some prospective tenants have already been a little freaked out by the vaulted, 21,000-square-foot space, previously home to "2,000 rotting pigeons" and a homeless encampment. But Foley remains confident that someone is going to see the space as "pretty fabulous" as he does. Alas, because the church is a landmark, a preservation architect is involved with the restoration.

This isn't the only vacant church property around town  everyone's pretty familiar with that former Lutheran church at the corner of Dolores and 19th that was converted into a multi-million-dollar private home that no one bought  it's now apparently going to be used by a nearby private school. Half a block up, the Second Church of Christ Scientist is (somehow) going to be converted into condos. And Sacred Heart Church (554 Fillmore Street) sits empty with no plans to do anything with it because it's a state landmark and no one wants to touch it.

We can hardly believe the awesomeness of today's palate cleanser, which comes to us straight from the airwaves via Buzzfeed. On the latest episode of the reality show Joan & Melissa, Joan Rivers

21-year-old Geneva Dixon, who was originally charged with murder for the November 22 stabbing of her 28-year-old boyfriend Norris Lewis, may have the case against her dismissed pending a ruling from an Alameda