After last night's arrests on Frank Ogawa Plaza, members of Occupy Oakland vowed (on Facebook) to return this afternoon to occupy City Hall proper. The goal of today's Occupy action, according to its event page, was to "go into city hall to occupy the mayor's and city administrator's offices" while jamming Oakland's government phone lines to protest last night's arrests.

Claiming the arrested folks are being held without charge as political prisoners, the group assembled outside of City Hall around 2 p.m. this afternoon, at which point Oakland Police quickly locked down the building before sending officials out to address the crowd on the steps. A spokesperson for Occupy Oakland reportedly announced a series of demands including: releasing those arrested last night, dropping the citations against them, returning confiscated property and respecting the Occupy movement.

According to local reporter John Osborn, who is on the scene in Oakland, roughly 100 protesters were gathered outside as of 3:20 this afternoon and they also "cleared out a giant bowl of potato pizza from Arizmendi."

More on this, and the pizza, as it develops.

Update 5:05 p.m.: According to several reports on Twitter two protesters have been arrested outside of City Hall. The Oakland Tribune reports that remaining protesters explained the two arrested were trying to force their way in to the building. Protesters outside are now standing outside the door in solidarity.

Update 6:20 p.m.: And now, as this dark photo from SFist pal Justin Beck shows, there's a tent on the plaza. 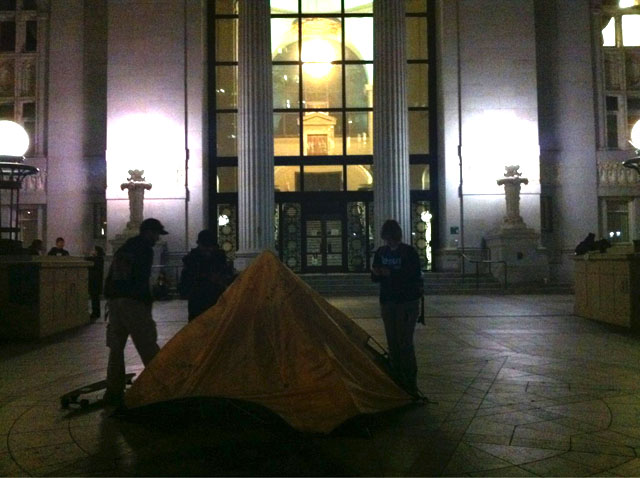 We got a glimpse of the minor-league version of this quirky ballpark freebie back in November, but today the San Francisco Giants have revealed their updated, very orange take on the giveaway item.

Tomorrow marks the first preview of Ghost Light, a new play co-conceived and directed by Jonathan Moscone about the life and death of his father, slain San Francisco mayor George Moscone. Moscone is