Yesterday, AdBusters, the Vancouver-based anti-consumerism organization credited with starting the push to occupy public spaces around the country, sent out the latest of it's "Tactical Briefing" emails to supporters of the movement. After calling the recent camp-clearings in Oakland, New York and elsewhere the movement's "existential moment", the directive from the Adbusters mothership lays out the suggested next steps for a group that seems to be losing sight of its original intentions.

After keeping things peaceful for the past two months of global protests, the movement is ready for phase two. Or, as AdBusters puts it, laying the drama on thick: "Now begins the second, visceral, canny, militant phase of our nonviolent march to real democracy. We regroup, lick our wounds and begin our counterattack as early as [November 17th]." What kind of activities can we expect from a "nonviolent" counterattack? The AdBusters explain:

We will turn this winter into a training ground for precision disruptions - flashmobs, stink bombs, edgy theatrics - against the megacorps and the unrepentant 1%, a festival of resistance in the snow with, or without, an encampment that'll lay the tactical foundation for our Spring Offensive.

To put that in non-protestspeak, we think that means we should either start expecting Occupy SF to bring pillow fights, No-Pants BART rides and Thriller Dances to the lobbies of local megabanks any day now. For now, Occupy SF seems too... er... occupied with cleaning up their camp to be participating in any of the November 17th Day of Action protests going on in New York.

Meanwhile, for the AdBusters fans, this SFist editor recently discovered that the magazine is currently available in checkout aisles at various Whole Foods grocery stores: 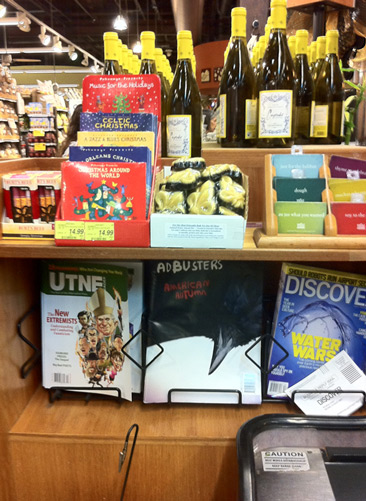 Up in idyllic Bernal Heights, a scantily clad fitness fanatic has captured the attention of an entire neighborhood: She is the Bernal Bikini Jogger and she is the closest San Francisco comes to

Award-winning jazz and cabaret performer extraordinaire Veronica Klaus will hit the floorboards next week at The Rrazz Room in her latest show, After Dark. In addition to being a noted artist and lush