The Occupy movement spread across the world with marches in Paris, London, Barcelona, Los Angeles, and all over the U.S. today, with everyone generally saying the same thing: capitalism kind of sucks lately. The march in San Francisco made its way to City Hall, where a group of at least a thousand gathered in City Hall Plaza this afternoon. Meanwhile, the Occupy Oakland gathering swelled to 2,500 or so according to CBS, with some now saying that the Bay Area Occupy camps should perhaps join forces (a tweet from this evening says there are about 20 people down at the Federal Reserve this evening, however another notes that the camp has spread into Justin Herman Plaza).

SFist encountered an energetic young man in pajamas walking up from CalTrain with his pillow and knapsack, asking for directions to the Federal Reserve this evening.

Also, sometime during the march today, a guy standing on a railing near the Powell Street BART entrance fell down into Hallidie Plaza. Ouch.

Here's another image from today's march, courtesy of jjinsf. The Chron says this group was mere "hundreds," but kind of looks like a lot to us. 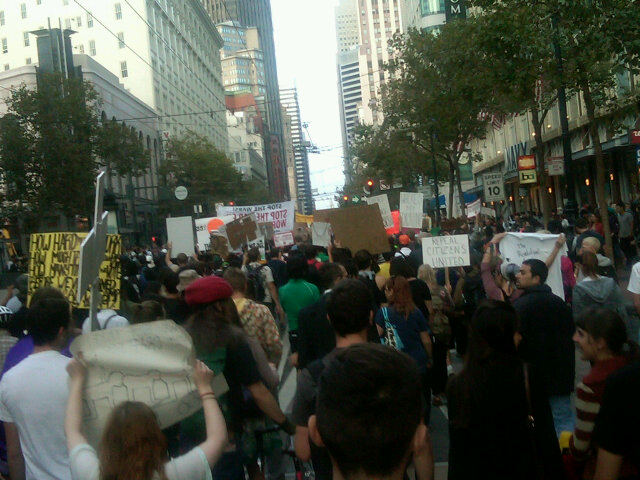 Reports from yesterday's Occupy SF solidarity march suggest that thousands of people showed up to show their support for the Occupy movement. Protesters marched from the Occupy SF general assembly at the Federal

Global capitals were filled with street protests, but San Franciscans took advantage of the last of the warm weather for a big weekend of street fairs, including the Noe Valley Harvest Festival and