Not that we ever find delight in the wake of a major fire that displaced 31 residents, but Three Twins Ice Cream whose Fillmore Street shop was in the same building as last night's massive fire in the Lower Haight are clearing out all their half melted inventory. Three twins owner Neal Gottlieb, trying to make the best of a sticky situation, tweets:

When life gives you lemons, give out Lemon Cookie. We have hundreds of 1/2 melted pints @254 fillmore as the fire knocked out powerWed Sep 28 17:04:44 via Twitter for Android

Yes, hundreds of pints slowly dying. Come get some @mlaffs: @threetwins are you giving them away?Wed Sep 28 17:50:24 via Twitter for Android

So, there you go: free ice cream. And it's hot out, so we don't imagine it'll last too long.

Also, if you've got any ideas for a Three Twins Ice Cream Pop-Up Store in the near future, Neal is looking.

UPDATE: Well, that was even quicker than predicted. It's sheer madness in the Lower Haight this afternoon and apparently this guy snagged all your free ice cream: 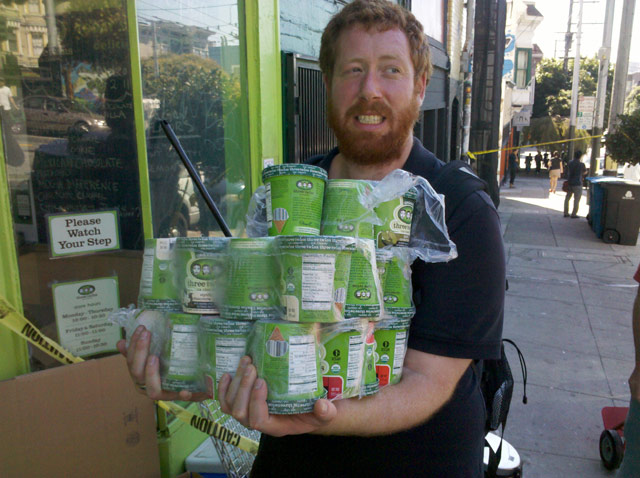 In a new turnabout for the city's Sit/Lie ordinance, parklets and wayward youth, a local advertising student has found yet another use for a Haight Street parking space: put a bed on

56-year-old Hong Ri Wu, accused of a double murder last winter and whom a court-appointed psychiatrist has already deemed mentally unfit to stand trial, is in his fourth week of a hunger strike