While we love the tortue of an eight-hour Supervisors meeting as much as the next person (read: not very much!), we're happy to see these meetings have become a lot snappier in the three weeks we've been back from recess. That whole cordial, kumbaya thing was great, sure. But so is getting in and out of the meeting in under two hours. This week's meeting the board covered everything from bird safety issues to mobile apps to a potential lawsuit for public campaign financing - all in an hour and 40 minutes. Let's get to it:

Items 1-8 passed: Most of those items have to do with property taxes, but tucked in there in Item 1 was an agreement to license music from the Non-Stop Music Library. No one has actually explained why the city needs to be licensing generic Muzak, but we're really hoping to get some jazzy new upgrades to the "Meeting is in Closed Session" music on SFGovTV.

In Hayes Valley, Ross Mirkarimi extended the lease for the Proxy Project - that perma-pop-up of coffee shops, ice creameries and (soon) beer gardens - by an extra two years. +1 to Ross Mirkarimi because: outdoor beer, duh.

Speaking of the great outdoors, we may have ribbed Superviser Mar a little bit about his Bird-Safe Buildings legislation, but when all the eggs are hatched on this one we can't help but be OK with it. Actually, we might not be fans if these bird-safe building codes were designed to protect the city's flying rat population. But apparently pigeons, hardened urban dwellers that they are, aren't really the ones suffering all the casualties at the hands of 101 California et al. It's the more majestic creatures like the red tailed hawk we're concerned with here. +1 for Eric Mar.

We also saw Supervisor Avalos bring up legislation he announced last month that would allow bikes in office buildings. We're all for this, of course, but no points for Avalos just for repeating the same stolen bicycle story from August.

Supervisor Chiu introduced possibly the most intriguing legislation of the day. The Board President wants the SFMTA to create a notification system and make public the city's data on temporary and permanent towing restrictions. It's a piece of legislation the general population is going to love (especially because that SFPark iPhone app is kind of useless), so you can expect him to wave this one around proudly from now until November. +1 to David Chiu for the idea, but don't be surprised if we start to see opposition once someone figures out how much revenue the city could be losing on with fewer parking violations.

Regarding that City Center Target going in at Masonic and Geary - as predicted the signage is a bit of a sticking point, but the conditional uses passed right through the planning commission with almost no opposition, as Supervisor Wiener explained. Speaking to that prickly Anti-LGBT PR problem that Target is still dealing with, Supes Wiener and Campos seem to be satisfied with the company's outreach efforts in the neighborhood, the city and the LGBT community at large - so we should be all clear here, right? Target's is a done deal?

Wrong. Ross Mirkarimi, who is happy to agree with Campos and Wiener on the "larger issues", isn't sold on the practical issues of putting an almost annoyingly car-friendly store like Target on the already problematic Masonic corridor. Target was so busy putting out the LGBT fire, it seems, that the company is completely unaware of neighborhood initiatives like the Geary BRT program, the traffic that Trader Joe's a block away experiences or the recent traffic fatalities on Masonic. So, if you were wondering who is harder to please: the Gay Community or District 5. It turns out it's District 5. [Full disclosure: the SFist Western Branch Office is located in District 5.]

But hey, whatever - Ross just got named one of 7x7 Magazines Hot 20 Under 40. +1 for Ross Mirkarimi. Even Ross is surprised: 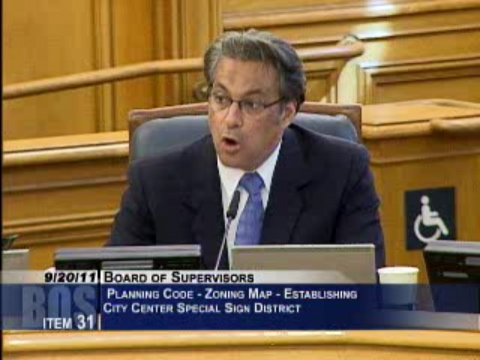 Finally, in loosely related fashion news: This weeks' award for best Indian Summer getup goes to Supervisor Malia Cohen. Sorry, Supervisor Kim - not only did Cohen bring the heat with those matchy-matchy white frames, but she also called for a hearing on school safety. Which, as the former Board of Education President, should have been Jane Kim's move. +1 to Malia Cohen.

Pretty positive day across the board. We haven't seen a lot of positive action from the boys club at the top, which is giving Supervisor Cohen a chance to make a play at the lead. Meanwhile, near the bottom Campos has been relatively quiet, but he stands to make up a lot of points if he leads the rally to win free Muni for students.

Brian Wilson held off the Dodgers in Chavez Ravine last night to save Vogelsong's start - and the offense didn't do too bad in the 8-5 win either. Arizona won their game against

23,000 nurses at Kaiser, Children's Oakland, and Sutter Health are expected to strike in Northern and Central California tomorrow. [Chron] This weekend's Folsom Street Fair will include a food court for deviants,

—
Board of Supervisors Weekly Power Rankings for Wednesday, September 21, 2011
Share this