Earlier this morning, a window washing scaffold at 300 Berry Street in Mission Bay partially gave way, leaving two workers dangling 14 stories up. The fire department was on site around 8:30 a.m. and managed to safely recover the two window washers, neither of whom were seriously injured in the incident one of whom was taken to SF General with serious injuries.

Bystanders at 5th and Berry craned their necks to check out the action, but someone in that fancy new high rise probably got a little startled over their coffee this morning.

UPDATE: SF Appeal follows up with a more detailed report:


Crews found the two workers hanging by their harnesses from the scaffolding--which was practically vertical--one near the bottom of the scaffolding and another near the top.

Rescuers were able to pull the worker near the top to the roof, she said. He suffered serious injuries and was taken to San Francisco General Hospital.

The second worker was pulled inside through a window on the 14th floor. A spokeswoman for the SFFD didn't know whether the scaffold collapsed due to user error or equipment malfunction, but the California Division of Occupational Safety and Health is looking in to it. 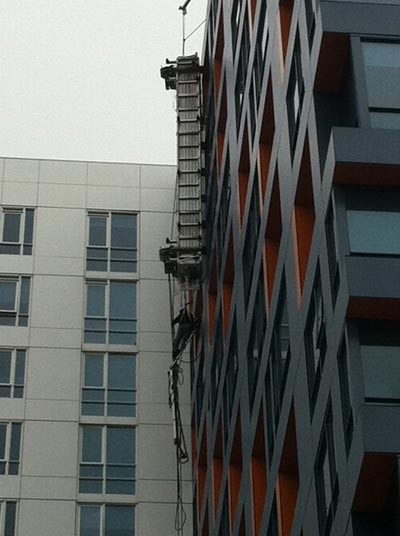 In a brief update to the news that Anthony Bourdain would be filming a new show on Zeitgeist's now-lovely patio, the Valencia street beer gardeners write to their email list: "No Reservations will