Tuesday's meeting was all over the board (pun intended?). So, appropriately enough, current points co-leader in these Weekly Power Rankings Sean Elsbernd was all over the chambers. The outerlands supe was probably just getting himself fired up to deliver his big speech on city retirement benefits. It's hard to tell from the SFGovTV video, but we're pretty sure he was hiding a walkman in his coat pocket and blasting "Eye of the Tiger" back there. Such determination: 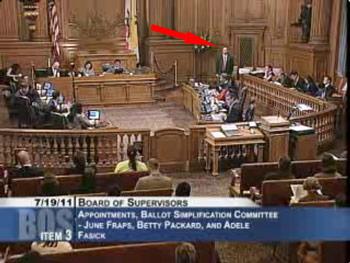 But we'll come back to Elsbernd and his pension punch-up work later. First, we need to discuss how much we've missed hearing Carmen Chu's voice these past couple months. Looking summery but neat, the Sunset supe took to the microphone to ask for the Board's support on the $6.8 billion spending plan that the budget committee has been hashing out. There's really not much exciting about the budget, but with Chu's ebullient delivery we couldn't care less that there are still some unresolved questions (like what's up with redevelopment, anyway?). +1 to Carmen Chu for delivering the budget as though she were describing a cupcake recipe. David Campos even called her "smooth, open and efficient," (which: rawwrr) and Mirkarimi elicits a smile: 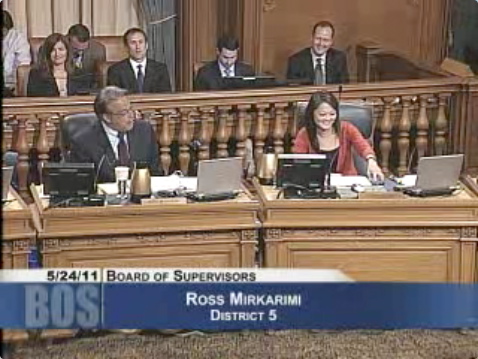 Ross also explained that he's "been through quite the buffet of budget experiences," during his six years on the budget committee. That's kind of a delicious bon mot, but it makes just about zero sense. Has he been visiting the budget and loading up his plate? Is that how we got that new Police Academy class approved?

Still on the budget topic: several supervisors thanked Mayor Lee for his office's transparent budget process. Too bad he hasn't been so transparent with his mayoral non-campaign. No points for the mayor!

The budget passed unanimously. David Chiu told the board he was proud of them. Everyone made plans to roast marshmallows around a campfire later.

Next up: David Campos grilled an MTA rep on the BART Feeder agreement, which renegotiates how much cash SFMTA gets from BART and vice versa. It was kind of intense actually, and Campos (politely) demanded answers: Why doesn't the new agreement base the reimbursement amount on the number of trips on BART and Muni? Why is the MTA missing out on $12 million? Valid questions, Supervisor Campos! But the item was continued for two weeks while the board figures out how they can renegotiate. And that's how you do the Campos Shuffle.

John Avalos' cellphone radiation disclosure legislation passed. We basically cured brain cancer with that one. So: +1 for that, and while we're at it, he deserves a +1 for his DJ night at the Knockout, which we attended and actually found enjoyable (if a bit sweaty).

Speaking of Avalos and entertainment: On the Entertainment Commission appointments, the D11 supe shook things up and threw Anna "Glendon Hyde" Conda's name in to the mix. That definitely got David Chiu all excited and the board president pulled out his swing vote to get the well-known party advocate on the Commission.

After getting pumped up in the corner, Elsbernd returned to the fold to explain why the Mayor's pension reform plan is going to be a big gamble with a billion dollars of savings the city has set aside for benefits. We find pension reform to be tedious (albeit completely necessary) so we actually tuned out for a bit while Elsbernd thanked the city, labor and the mayor for their hard work. And anyway, the motion to submit the city benefits charter amendment was passed unanimously. We're gonna need a bigger bag of marshmallows.

Scott Wiener's charter amendment (the one that would allow the board to amend or repeal voter-approved initiatives) got a little messy: The D8 supe moved to table two items pertaining to an earlier draft of the amendment, allowing us all to move on to the latest draft and also avoiding a public hearing. Supervisor Elsbernd, still fired up and gulping from a coffee cup, leapt at the chance to object to the motion to table. His objection was misguided (because the next item on the agenda was the actual draft we wanted to talk about), but he gave a delightfully plucky speech about the messy ballot measures that have been popping up lately.

Legislation like Avalos' anti-park privatization measure and a measure designed to stop the Park Merced problem have a decent chance at passing in November, but they're so poorly written that they wouldn't even achieve their goals. "Do you people even read what you're signing?" was pretty much what we got out of that. +1 to Sean Elsbernd for the over-caffeinated speech, just take it easy on the lattes bucko.

The actual, final draft of the charter amendment was submitted with a 7-4 vote with lefties Avalos, Mirkarimi, Campos and Mar voting against. Look for the amendment on November's ballot.

During the proceedings for the AT&T Lightspeed network upgrades, at least one person in the audience got a stern talking-to from the deputy sheriff. So we know the sidewalk preservationists can still summon the energy to show up for these things after Scott Wiener has put it off for so long. And speaking of putting off this vote, Ross Mirkarimi wanted to hold off until September - a motion Sean "Irish Coffee" Elsbernd literally rose up against. The continuance failed, the EIR exemption was approved and we're getting 500 new sidewalk boxes. Ta-da!

All in all, not a terrible week for the board: We have a tiny crush on Carmen Chu, Avalos is back in black after his DJ session at Oldies Night and Sean Elsbernd should never (ever) be without a cup of coffee or three. Jane Kim, on the other hand, might be on to us. She's definitely toned down the wild gesticulations we love so much, but here it is, your moment of Kim (and her multiple beverage selection): 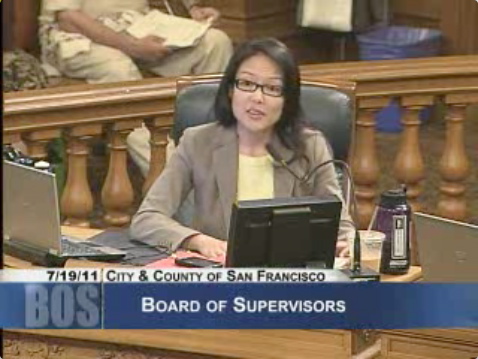 The most exciting event to ever happen in San Francisco will go down on September 16 at the Golden Gate Theater. You might want to sit down for this one. You seated? Good.

LovEvolution, née LoveFest, has found a new home after the city grew weary of the thumping bass and rolling crowds of brightly colored teensters descending on Civic Center every year. Growing concerns about

—
Board of Supervisors Weekly Power Rankings for Thursday, July 21, 2011
Share this