Remember that time the mayor wanted to do away with San Francisco's Cable Cars? Of course you don't, it was in the 1940s. Here now, the Tenderloin Geographic Society adds historical perspective to the city's transit and fiscal woes by revisiting the tenue of Mayor Roger D. Lapham, whose plan to eliminate the rolling monuments to human ingenuity won him the honor of also being the first mayor in city history to be subject to a recall.

By: The Tenderloin Geographic Society:
Despite the status and aura of history that mayoral office confers upon an individual, one certainly doesn’t do it for the money—current Mayor Ed Lee took a $7,000 pay cut when he took his tempting but temporary office. To become a figurehead for such a fickle city as ours invites rather too many complications.

As the sage once revealed, Mo' money, mo' problems. Given the number of problems extant in San Francisco, the office of mayor begets no money and all problems.

Our passion for examining the office continues, and so let us remember a somewhat forgotten Mayor, a man who proclaimed that he would seek office for one term alone; a man who, despite bringing the United Nations to San Francisco, was nearly recalled for his villainous role in transit history. He tried to solve San Francisco’s transit problems, and came up against his biggest obstacle: its citizenry. From the May 14th, 1944 issue of Time Magazine:


Loafers in San Francisco's Civic Center Plaza, idly feeding crumbs to the
pigeons, suddenly found three circus elephants in their midst. With equal
suddenness, in the midst of the elephants, appeared sober, chunky Roger
Dearborn Lapham, the onetime shipowner who is now San Francisco's bustling
new mayor. Mounting a soapbox, able Mayor Lapham gave the pigeon feeders an
impromptu 15-minute lecture on the merits of unifying the city's traction
system. Pointing to the elephants, he cried: 'There stands an early
outmoded form of transportation the likes of which we intend to get rid of
in this town.'


By World War II's close, the city that had represented a major cog in the war machine was about to experience a sudden spike in population, and with it, a crisis in crime, housing, and employment. As a former industrialist, Lapham saw the aging municipal transit system as an easy fix: the city would purchase the private Market Street Railway for $7.5 million, unite it with the city-owned Municipal Railway, retire the old rolling stock and replace them with modern buses. Beside the four-track streetcars on Market Street (!), Cable Cars came under the scrutiny of this pragmatic titan.

Symbols of San Francisco though they may have been, the quaint mode of transportation introduced in 1873 by Andrew Hallidie became strictly anti-profit with the advent of the combustion engine. To Lapham’s mind, the rolling museums were the least effective means of transportation. But since when has San Francisco cared for efficacy over style?

You know how the story ends. Lapham did get his way, to an extent, tearing out some of the old lines in favor of buses, and became the first mayor in the city’s history to become subject to a recall, in part for the reprehensible offense of raising fares from 7 cents to 10.

In the years since, what have we learned? With the Central Subway project under fire for escalating costs, as well as an endless stream of numbers detailing BART’s bleeding revenues, not much. We’re the City That Knows How, but we’re also the City That Will Do What It Wants--and pity the mayor who tries to tell us otherwise. As Mayor Lapham told the Board of Supervisors:


The city should get rid of its cable cars as soon as possible...I know there are strong, sentimental reasons for keeping this old, ingenious and novel method of transportation. The fact remains that the sentimentalists do not have to pay the bills and do not have to run the risk of being charged with criminal negligence in the very possible event a cable breaks and a car gets loose on one of our steep hills. 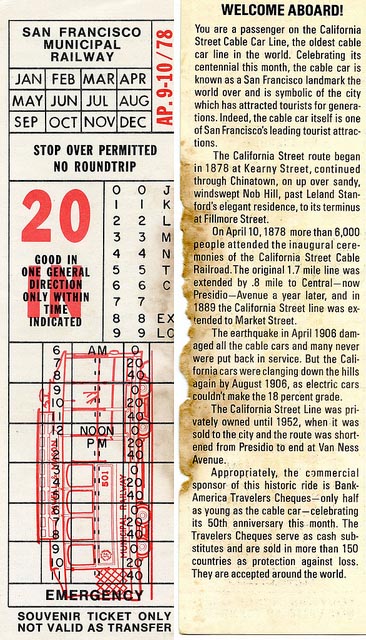 The Tenderloin Geographic Society is San Francisco's home for colloquial cartography, citizenship services and walking tour reviews since 2006. Stay tuned for the Tenderloin Report. If you've missed any episodes, you can always catch up here.

Former Muni executive director Nat Ford has finally left the building with his $384,000 golden parachute, and with this news we were both relieved and disgusted. Debra Johnson, meanwhile, who was formerly

There are countless stories to tell in San Francisco, but sometimes a picture says so much more that mere words. Each Tuesday or Wednesday, we present to you 7 Reasons. (Our sister site

—
Urbane Studies With The Tenderloin Geographic Society, Volume 24: Muni or Death, A Mayor's Tale
Share this