Last night, Noise Pop teamed up with guerilla dining society graffEats to reprise the Covers Dinner experiment they debuted during this year's Noise Pop music festival. The concept is pretty simple: pair each of the seven courses on Chef Blair Warsham's tasting menu with a couple songs that play on the theme, taste or mood of the dish. The twist is that every dish is Warsham's culinary cover version of creations from popular local chefs. Naturally, the musically inclined folks from Noise Pop followed suit and with the playlist that covered everything from Tom Waits deep cuts to Lady Gaga club anthems.

Adding to the intrigue, the secret location for last night's dinner turned out to be Capp street hideaway The Secret Alley. Any reservations we might have had about annoying "underground dining" concepts disappeared when entered the space which (appropriately enough) feels like the backdrop for a noir film about a Mission district alleyway. For a better look at it, take a look at the photoshoot SFist pal Troy Holden did inside the space.

Dinner kicked off with a "Snacks" course, which was both an amuse bouche and an obscure nod to local garage rockers Best Coast. (Specifically frontwoman Bethany Cosentino's cat Snacks.) What we really loved was that it was a fluffy ball of popcorn with a fried piece of parmesan that cut through the sponsored-vodka martinis we downed before the show. To complete the look, the warm-up round was served on a blank CD. (Although, we were disappointed when the CD didn't have a hand-scrawled note like "Roadtrip Mix '02!" on it.)

Warm up courses included a "smoky and emotive" tartare of smoked arctic char, paired with a D'Angelo cover of Smokey Robinson's Cruisin' followed by chilled snap pea soup set to a backdrop of Andrew Bird singing Kermit the Frog. On the B-side of dinner, things got even more interesting with a sheet of six spring ravioli created by Quince's Michael Tusk. The roasted garlic cream dazzled, mostly because the smell of it had been hanging in the air since we arrived. Warsham's take on Thomas Keller's grilled octopus and chorizo dish was billed as the headliner here, but the Aged Beef with Uni and burnt butter soy sauce (a kicky reference to Bob Dylan's 70's birthday) was the real showstopper last night. 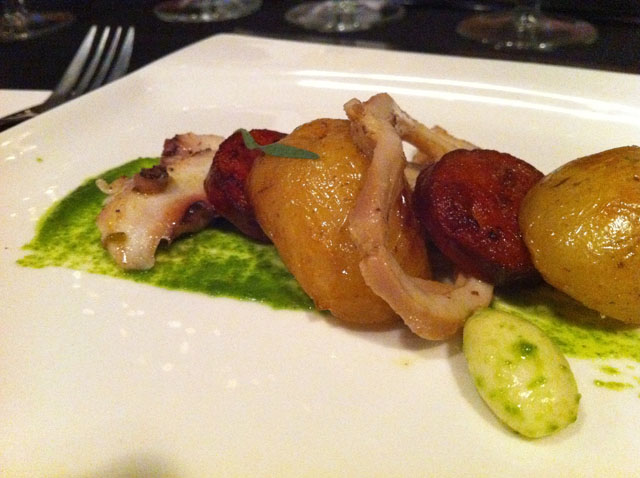 Like any good concert experience, the crowd seemed appropriately drunk on BYO booze and wine pairings before we were even through the second course. We even spied couple attendees popping outside for a smoke or a toke before the dessert course. Hopefully no one left before the encore of raspberry cheesecake with a slab of savory sesame cracker crust. Those closing notes, paired with sugary pop songs like a Bat for Lashes' cover of Use Somebody and Ted Leo's take on Since U Been Gone were a guilty pleasure that left us satisfied, if a bit restless, and in search of a nightcap.

Noise Pop and graffEats will be putting on a second sold-out show tonight. Keep your eyes on both for their next performance.

Have you seen the Planning Department's Recreation and Open Space Element? (ROSE, if you're nasty.) It details the department's plans for creating or modifying the city's green spaces, including one awesome proposal to