Yesterday's Board of Supervisors meeting was mercifully short, thanks to an absolute dearth of discussion and a full roster of supervisors arriving on time to the People's Chambers. Items 1 - 11 breezed right on through on a roll call vote, which means the $1.1 million staircase in Hunters Point gets it's federal funds, the Mission Streetscape Plan is finally approved and (most importantly) Southern Pacific Brewing Company gets it's liquor license. With those out of the way, it was on to the final vote on the Twitter Tax break, which went exactly as you might expect.

Supervisor Avalos, with his own mayoral campaign to think about now, stood up to speak his peace and thank the other dissenting voters one last time before the same 8-3 vote went through. This isn't the first time Avalos has laid issues to rest like this. A month ago, he lamented the passage of the weak Mayoral Question Time process in the same way. It's nice to see someone on the board who doesn't take a loss lying down, but in this case the discussion of the business tax, the payroll tax and taxes on stock options has already moved on. Even Ross Mirkarimi seems ready to talk with President Chiu, Mayor Lee and Supervisor Farrell about how to tackle the issue in the long term. No need to be a martyr here. Zero points for John Avalos.

Likewise, the vote on the non-resident fees for the Botanical Garden passed with the same narrow margin as last week, but none of the five supes who voted against it felt like giving it a proper eulogy. Instead, one Mary Spoerer decided to go all Queen of Hearts on the Board, screaming "Off with your heads!" and waving goodbye as a deputy pulled her out of the room.

Supervisor Wiener took a moment to speak to his "long overdue" tenant displacement legislation which passed unanimously on the first vote. Later the D8 supervisor said he was happy to have his "kumbayah moment", but he was still disappointed to see that the Transit Workers Union was moving forward with their strike vote. He called for the TWU and the MTA to take the opportunity to reform Muni and save money in a "horrific budget year". Nice sentiment, but we'll wait to see if Wiener has any teeth on the MTC before we award points for raging against Muni. Everybody and their sister does that already and that obviously hasn't gotten us much closer to Muni reform.

And speaking of showing one's teeth: at his D8 town hall meeting this past weekend, Supervisor Wiener let the audience know they could contact his office if they spotted coyotes in District 8. So obviously, Scott Wiener gets +1 for being the only Supervisor we know of with a coyote engagement protocol.

From there the board moved on to introducing new legislature, none of which was particularly interesting:

Supervisor Mirkarimi introduced a resolution to support SB 729, which makes it slightly more difficult for banks to drop a foreclosures on mortgaged homes.

Eric Mar introduced legislation to keep discarded restaurant grease out of our city's sewers, which is apparently a real problem we have.

Jane Kim requested a hearing to get an update on what happened to all those homeless people who were evicted from the Transbay Terminal, commended the Tenderloin community for their efforts after a recent 3-alarm fire in her district and then playfully adjusted her hair with the carefree air of a shampoo commercial. 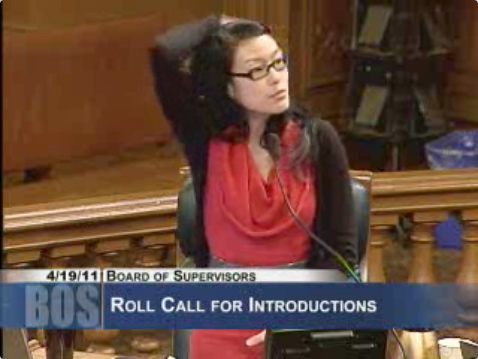 Completely arbitrary +1 to Jane Kim for classing up this snoozefest. Maybe we could also get her to eat Doritos during Board meetings and solve that budget deficit through SFGovTV product placement.

Mark Farrell finally introduced his legislation to reform the tax code in the wake of the Twitter tax break.

David Chiu followed Farrell's tax reform comments by saying he's also committed to solving this problem, but he's waiting on more data from the City Economist and Controller. So, we'll just say any points either of these guys would get for this are canceled out until we see more action here.

Chiu also supported a new health care initiative that would created a more central repository for patient records (because paper records are a mess and often "illegible", as he says). He closed with a proposal to use Bay Trail funds to make Fisherman's Wharf more agreeable during the America's Cup. If you ask us, the most agreeable part of Fisherman's Wharf is that we never have to go there, ever.

Our final vote on this week's meeting is a resounding "meh." Jane Kim is finally back in black and Scott Wiener's coyote policy put him back on top of the rankings in a tie with Ross Mirkarimi. As a tiebreaker, we'll just say Mary Spoerer wins this week for showing some signs of life and giving the Sheriff's Deputy something to do.

Get baked with Obama! [SFBG] World's coolest garage door? You decide. [Curbed] San Franciscan gardeners permitted to sell their crops. [KCBS] Did you know you can put a fishing line down a drainpipe

San Quentin / Capsized Boat: Did you know San Quentin had a fire squad composed of minimum-security inmates who live outside the prison walls? Well, they responded to distress calls and pulled a man

—
Board of Supervisors Weekly Power Rankings for Wednesday, April 20th 2011
Share this