For the second week in a row, the Board of Supervisor's meeting kicked off with all members of the board actually present and accounted for. As they very well should have been, because yesterday's main event, the Twitter Tax Break, should have brought out some lively discussion. It should have. But it didn't.

Items 1-7 slid right through on roll call votes in about 3 minutes, which must be some kind of record, and the clerk was calling on Tenderloin Supervisor Jane Kim to deliver her supporting statements on the proposed tax break in less time than it usually takes Ms. Kim to get from her office to the People's Chambers.

Kim delivered her arguments with all the panache of an 8th grader giving book report - which is to say we got a lot of fluffy talk about how Market Street is a vital corridor in San Francisco. But, whatever - she made up for it with all the style of a substitute teacher in her light, springy pantsuit and pink blouse. At the risk of turning these Power Rankings in to a fashion event, we must say ditching the glasses this week did help to draw some attention away from her boilerplate statements about revitalizing the (barf) Uptown Tenderloin District. When you wear glasses people kind of expect more insightful comments. So, right off the bat, it's -1 for boilerplate statements, but +0.5 for fashion statements (and because the dangling 0.5 from last week was kind of bugging us). That works out to -0.5 for Jane Kim after her opening remarks, but this item was her baby, so she's not out of the woods yet. Also, new favorite supervisor tic: 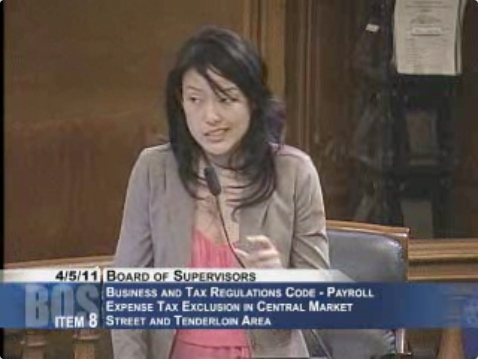 Supervisor Avalos was the first to buzz in and respond, speaking out against giving exemptions to the payroll tax. Businesses should be socially responsible, he explained, and giving tax breaks to the already wealthy is only "aiding and abetting the exacerbation of these disparities in wealth" in the corporate sector. OK, that's a pretty good recession-era argument that will play well with the have-nots, and it justified his Nay vote, but it didn't offer any alternative solution other than pointing out that there are already quite a few benefits available to businesses in Civic Center, Central Market and the Tenderloin. Again: nice thoughts, but we haven't seen those efforts do a whole lot to move the needle in the Tenderloin yet (pun intended - sort of). Avalos gets -1 because we're bored.

Ross Mirkarimi rang in next. He talks a lot, and god bless him for that, even if we need to diagram his sentences to figure out what he's getting at. (See also: "Goddammit, Ross".) Distilling yesterday's speech down to something tweetable: Ross wanted to delay the vote until the board could review the new amendments about the partnership deal Twitter would be engaging in. To review what the city and the neighborhood get in exchange for the tax break. He also said "toothless" twice to refer to how other efforts like this never actually make the businesses give back to the city. While we can never be sure what he was really getting at, we think he was talking about blowjobs, so what the hell: +1 to Ross Mirkarimi.

Scott Wiener followed Mirkarimi and offered his support for the Twitter tax break. The Castro supe gave a measured approach, calling for a broader approach to tax reform in the long run but immediate action to keep Twitter in town now. He also kept his comments to under 3 minutes, which is how you win over the youngs. +1 for Scott Wiener.

Eric Mar said some stuff. (We think?) He stood up and he talked in to the microphone, but all we heard was "thanks to..." Thanks to David Chiu. Thanks to Ed Lee. Thanks to Supervisor Kim. Whatever, boring. -1 for Eric Mar. It would've been minus two, but the Richmond supe got a haircut.

Up next was David Campos, who admitted to not speaking up during the discussions leading up to this, but he did follow up on Mirkarimi's mention of the Biotech tax break - Campos wanted to review whether or not the Biotech tax break and the Film Industry tax breaks are actually working. He also expressed his concern for the impact the Central Market tax break would have on other neighborhoods. All good points, but not compelling enough to win anybody over. And anyway, he ended by covering his ass and explaining that he looked forward to working with Supervisor Kim to make sure the plan helped all of San Francisco moving forward. -1 on Campos for removing the spine from his Nay vote.

Mark Farrell, a cosponsor on the legislation, emphatically weighed in on the side of the tax break but scolded the board for making it all about Twitter and talking about the bill as a corporate giveaway. Essentially, he was calling for the approval of the bill, but reminding everyone that further revision is needed to the payroll tax. We'll allow it, but won't award any points because, duh: you said that last week. Thanks for keeping your comments short though. No change for Mark Farrell.

President Chiu and Sean Elsbernd switched seats so Chiu could address Avalos' points about the previous efforts to revitalize the neighborhood. Those obviously haven't been working, Chiu pointed out, so we need to change the status quo first and address the payroll tax later. Fair: +1 for David Chiu. Maybe it's just his mayoral play, but the guy is growing on us.

Carmen Chu added a couple points from her perspective as budget committee chair, but honestly we heard most of it already. Zero points for Carmen Chu.

Malia Cohen finally gets +1 for her quip: "I think the honeymoon is over." But didn't add much else other than to remind us that 3rd street needs some revitalization as well. It sure does! Let's focus on the TL though.

Sean Elsbernd said nothing. He must be worn out after last week's Parkmerced Project. No points for Elsbored.

The only other discussion worth mentioning was David Chiu's Urban Gardens deal - a no-brainer, really, but President Chiu had to remind everyone that he was proud to be sponsoring it along with (Temporary) Mayor Ed Lee. Barf. Why don't you guys just get a room already?

At the end of the day, we're kind of confused about how Jane Kim still manages to rank near the bottom, with her nice outfits and all that, but good looks aren't everything. We'd give her another point for her overall win on the Twitter thing, but we've already been accused of point inflation once. So keep working on it, Jane! Scott Wiener inexplicably regains the top spot, making a case for the need to be consistently reasonable rather than when it's convenient. Eric, we're really sorry for everything - nice haircut though.

After failing to reach a budget deal with Republicans, Governor Jerry Brown unveiled a new tactic today to deal with the Grand Old Party. Namely, hugs. On Tuesday he encouraged state workers to

Before Cirque du Soleil's Quidam opens tonight at the Cow Palace, this acrobat (?) defies gravity during a taut routine. Kudos to you, sir.

—
Board of Supervisors Weekly Power Rankings for Wednesday, April 6th
Share this