As you get ready to leave work and head for your bus, train or corporate-sponsored leisure shuttle you might want to consider picking up one of the many local weekly papers for your commute. Or you might grab one because these sunny downpours are unpredictable and you forgot an umbrella. Either way, here's what you'll find in this week's papers:

SFWeekly's cover story is apparently syndicated across the Village Voice Media Network and it intends to clear the air about sex trafficking and what goes on in the seedy backpages of the Weekly and its Backpage classifieds site. You see, the Women's Funding Network testified before a Congressional hearing about Craigslist's adult section back in September of 2010, that "juvenile prostitution is exploding at an astronomical rate." The problem according to Village Voice, is that the WFN data is misleading. With that in mind, the article doesn't so much discuss the problem of prostitution-vi-classifieds (underage or otherwise) so much as it provides a lesson in research methodology.

In music, Marc Hawthorne checks out Janice Whaley's six-disc box set of A Cappella Smiths covers. Whaley, who admits she's a timid singer, has been documenting the ambitious project on her blog: thesmithsproject.blogspot.com/. We do enjoy some moping and Morrissey now and then, especially on these rainy Sundays we've been having, but to cover every song in the discography takes the sort of patience that we're not sure we could muster. In the end, that's exactly the point - Smiths fans are a quirky bunch and Whaley's motivation is honest enough, even if we cringe a bit hearing about how similar her recording process is to Johnny Marr's.

In food, Kaufman gives his impressions on Iron Chef and Michelin Star winner Dominique Crenn's "modernist, garden-centric cuisine" at Atelier Crenn. He compares his two meals there to "Terrence Malick films and Orhan Pamuk novels" (which is some really useful criticism of food, when you think about it) and the review only gets more high-concept and dreamlike from there. Without spoiling the ending, Kaufman eventually wakes up only to find that he's not sure whether he actually ate anything since he managed to have two four-course, 2.5 hour meals that "ended in a post-meal sandwich."

Peter Jamison also provides a follow up to March 2nd's "Illegal Guardians" cover story, bringing us up to speed on the necessity of reform in Family Courts.

The Guardian would like you to Do the Clam with Oakland's Shannon and the Clams. The "not quite queercore" band has been plugging away for a few years now and they're ready for their spotlight. We hope they ask people to stop making up genres like "queercore", but if it weren't for neologisms like that we wouldn't need three pages to explain a band's new album. So here's to queercore for saving print media.

Heather Mack takes a look at PG&E SmartMeters and the power company's PR missteps in Smart meters, stupid company. It's a very thorough take on this ongoing eyeroll-inducing saga, most of which has already been chronicled on these pages.

In Arts & Culture, Dennis Harvey's piece on Brazilian cult horror films caught our attention because we can't imagine anything more campy than combining Brazil and cult horror films. And in music we have a SXSW wrapup, a review of Hunx and his Punx (who we've been meaning to check out) and a pun-filled review of Midnite Snaxxx. 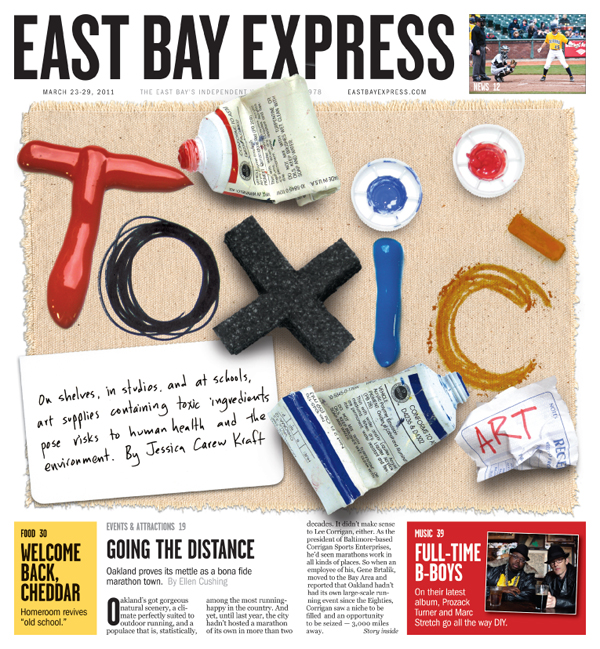 From the East Bay Express, we get a cover story about the dangers of toxic art supplies. We think this story might be a response to our accusations that the East Bay Express is being put together with Elmer's and popsicle sticks (which are both non-toxic, mind you). Still, as with many things, the likelihood that something might kill you is directly proportional to how enjoyable that activity is, so it stands to reason that toxic art supplies would be more fun. We would rule this article alarmist, but actually - you should always enjoy art supplies responsibly. Use protection and such.

In Arts & Culture, Rachel Swan tears up Free Range Thinking, Robert Dubac's book in which he "tears up newspapers, rails against TV and searches for truth." That's just the sub-hed and we've already torn that up too. Clearly this is an indication that the media is a mess. Seriously though, Dubac doesn't like Jersey Shore or The Oprah Network, so we're not sure we can get along with him.

Elsewhere in the East Bay, J. Douglas Allen-Taylor does some solid reporting on the death of community policing in Oakland and what Woman of the Year Jean Quan can do about it. Judith Scherr checks out the East Bay's small cities and how they share resources between them at a time when money's tight.

The Disposable Film Festival kicks off its fourth year celebrating short films made on everyday equipment like cell phones, pocket cameras, and other inexpensive video capture devices tomorrow night. Get your tickets now