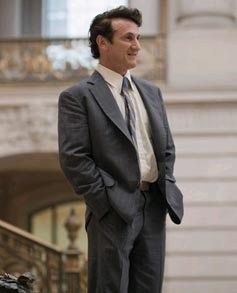 Franco revealed that he wanted to be a part of the film so badly that he would have “played the pool boy” just to be in it. But, thankfully, he plays Milk’s lover, giving the world a steamy Sean Penn and James Franco make out scene! $11 well spent!

Another tidbit: Van Sant (pictured) said they looked at hours of archival footage for developing the characters and maintaining historical accuracy. (In the film, you'll see snippets of "home movies" from The Hormel Gay and Lesbian Center's archive in San Francisco.)

Of course, it's impossible to overlook the fact that Milk, which opens Wednesday, is being released on the heels of the Prop 8 passage in California, the same state where Milk helped mobilize the gay community to demand their civil rights.

Speaking about Prop 8, Penn said, "It's only an issue because of ignorance in the first place. We don't have any excuse for being ignorant of the law...or ignorant of human history... In fact any support of Prop 8 would be minimally manslaughter. Because human history tells us that teenage boys are going to hang themselves out of a reach for an identity that they can't get.... And if this movie is a part of an engine to help reveal that, that's going to make us all happy and proud."

As we all know, Gus Van Sant's film about Harvey Milk, Milk, will open next week. In 1977, Milk became the first openly gay man to be elected to a major public office in the United States, only to be assassinated within his first year of serving on the San Francisco Board of Supervisors. At turns tragic and exhilarating, the film chronicles the last eight years of Milk’s life (played by Sean Penn), when he worked on campaigns for public office and the protection of gay employees.

The Slog, where we came across this jarring piece of performance art, likens the clip above in which six nubile tweens discover that David Archuleta did not win this year's American Idol to

The Oakland East Bay Symphony opened its season last Friday with the world premiere of ZipperZ, a soaPOPera. Led by Michael Morgan, the orchestra joyously celebrated its 20th season (which continues next month