Each Tuesday we will feature new music that should (or whatever) be on your radar.

Looking at the fact that Serj Tankian's concert at Slim's on October 28th is already sold out, we venture to think that Tankian already has a huge following from his System of the Down days.

We've got two Serj Tankian care packages that we are going to give away. They are filled with Tankian's new CD (they might be autographed), t-shirts, posters, stickers and even a 7-inch record. (Each care package will have a mix of these prizes.) Take the jump to enter this fantastic giveaway.
Download: "Empty Walls" 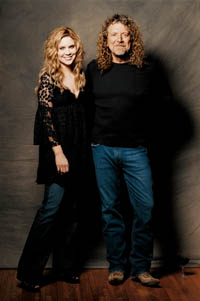 2. Alison Krauss & Robert Plant - Raising Sand: Yes, that says, Alison Krauss and Robert Plant. We have the "God of Rock" and the "Goddess of Bluegrass" collaborating together to make Raising Sand. Now this isn't any ole' normal bluegrass or rock album. This album breeds musical genius - not hard for two of the music industries' most prominent performers. They venture into blues, alt-country, rock, bluegrass and folk - each time, with grace and style.
Download: "Trampled Rose" & "Gone, Gone, Gone"

For fantastic prizes, more CD releases and of course our guilty pleasure, take the jump...

Perhaps in the traumatic stage of denial, we forgot to bring you some old obit news. Vincent M. DeDomenico, who co-created Rice-A-Roni along with his brothers, died last Thursday at 92. We tasted

The bay area Michelin Guide 2008 is out, and there’s not much changed from last year: the French Laundry is the only place with 3 stars (the most) in the wider bay